7/15/2005
Do you think you're cool?
Critical Thinking class has ended early, and so I'm currently capitalizing on the roughly hour-long break to blog and post a picture I've been itching to post - for all the obvious reasons.

We're going to have another batch of rehearsals today - and I'm gonna arrive home at around 21.00 today because of all the delays. We're somehow redoing the whole thing since the big guys finally realized that something seems wrong. Actually, me and Kizia talked about it yesterday (and here goes another transcript):

But today, thank heavens, someone finally realized the things they're supposed to have realized long ago, and so we're partly redoing the thing. But, it's okay, because we have sufficient motivation (read: pretty low Revelation midterm grades) and a lot of pride to fight against. (Sister Pinky's class has to win.)
Things went weirdly within the past twenty-four hours. After Martin got irritated with some of our group members he walked away (euphemism alert) and got us doing some real practice. And then, we turned out pretty fine.

Today, after watching a tearjerker (I think Kaymee cried, but I'm not sure about that) we had a weird discussion on the Pieta for Art Appreciation (Ian thought things were just going around), and now, Cybernook is swarmed with my blockmates anxious to know about their midterm grades for that subject. They were all looking at my terminal - Jaja, Kaymee and Caresse - until they began leaving because they've accessed the grades first. Later they came back, and Caresse is boinking (for lack of a correct term) at my arm to see her grades. (To note: I got a 3.5.)

On the other side, Les and a lot of the other blockmates are looking at her Multiply site, where this photo came from (from Be[wild]ered, obviously): 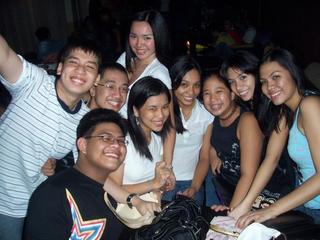 I'm soo obvious right now. Also I wonder why I can't blow this thing up the way I did with Sudoy's pics. Then again, the reasons are very obvious. Haha.

I suddenly remembered what Caresse just said. It went like, "Kizia is populating your blog!" Maybe true - I just pinpointed to her yesterday that every time she reacts to something I post on my blog something weird happens. Obviously I'll be mentioning those.

I'm gonna end this with two thoughts. First, why are the people on the other PC (Les, Jill, Ale, Cuyeg and those who went to me earlier) shouting? I wish it isn't a referent to whatever happened last week.
Second, I wish I had a photo with Kizia. Hahaha.
And your responses...