7/30/2005
A lot of thoughts within six hours
I still am amazed by what has just happened.

Simply said (and I'm the last to announce this probably), we won the Dance-a-Parable contest. We were fourth, but who cares? Just when we thought we wouldn't get in - and, consequently, would never win - we tied with another group for fourth place and won ourselves one and a half thousand bucks.

We were already thinking we wouldn't win first place. Fifth place was my best expectation (or none at all) but somehow, within our last rehearsals, we began to do well. We were just dancing the way we were supposed to. Maybe it's because we were the first to perform last night (I thought it was because of our sudden inclusion), but who cares? We won fourth place.

The costumes of the other groups were practically amazing - complete with socks for ears (for the champions), and the dance steps of the others were stunning (think of someone mimicking Michael Jackson or someone just dancing endlessly to recreate a letter S), but who cares? We thought our dance steps were good, and our costumes - and, yes, our make-up - rocks.

I don't know about you, but we all look like a little conflict of interests. The hip-hop dancers looked like Kiss (which is in itself an irony), with Jill's make-up standing out (think of a torn angel and you'll get me, probably). The cheerleaders were calling themselves the devils (you can imagine the calls: "all the devils, please assemble"). And we in the interpretative dance group? Angels. Haha. At one point I thought we would be asked to portray the classic good versus evil story on stage. I didn't even know I was supposed to wear make-up. But nevertheless, we do look amazingly good. (Check out Les' Multiply site. Really.) 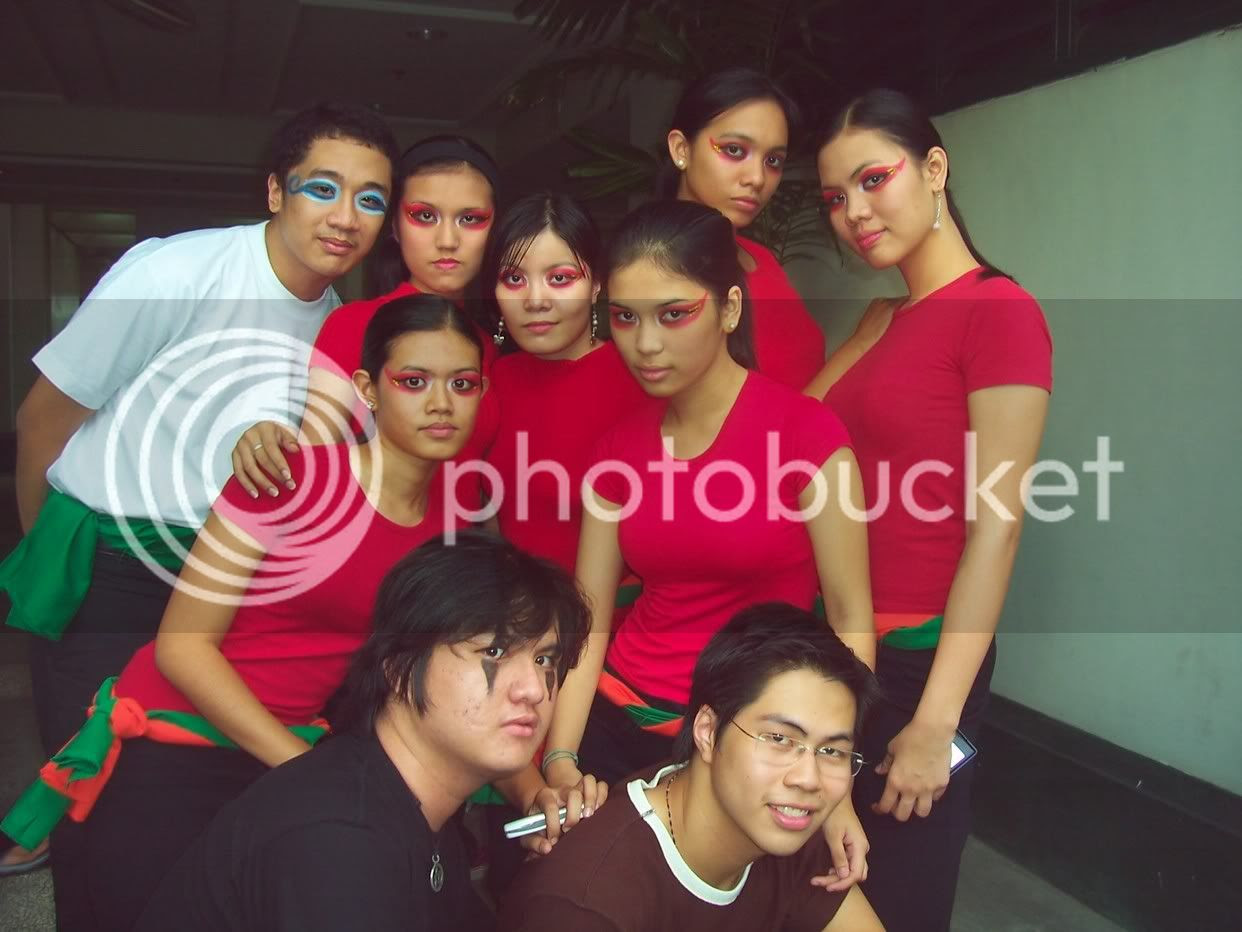 And, most especially, we did good on stage. We were still preparing as we went into the Yuchengco Auditorium (which is overwhelming), and all of us did good. So what if they had a better production? We won fourth place, we got extra grades - and we didn't humiliate Sister Pinky.

Turns out we would improve. And to think that we thought (and wished) we wouldn't get in.

So, finally, we could get a lot of rest on the weekend. I, for one, was staying up really late as I try to juggle the rehearsals, the reports, and the rapport establishment. Finally, a little reward for everything we have done - a little more positive reputation, and a lot of new things to talk about.

After we won, I lingered around the school, watching a little set from Twisted Halo and staying at McDonald's with the usual people (Kizia, Clarence, Jana, Ariane and Marcia). Although it was really awkward at first, sitting down and joining them just for company and not for dinner, it ended up going out great in the end. I was surprised Clarence told me (in the blog) that I was fitting in very well. Really? Then I should give myself a hug.

And maybe I should give everyone else a hug, because finally, I can believe, nothing's actually gone wrong - and nothing will ever go wrong, unless I make another stupid decision like last time.

But I'll not go to that. It's supposed to be a happy weekend - and it is.
And your responses...