8/08/2005
Let's not make this a dead giveaway
Last Saturday, the ABS-CBN studio tour. Today, possibly the most rambunctious day I ever had. But first, the former. Obviously I have to go chronological. 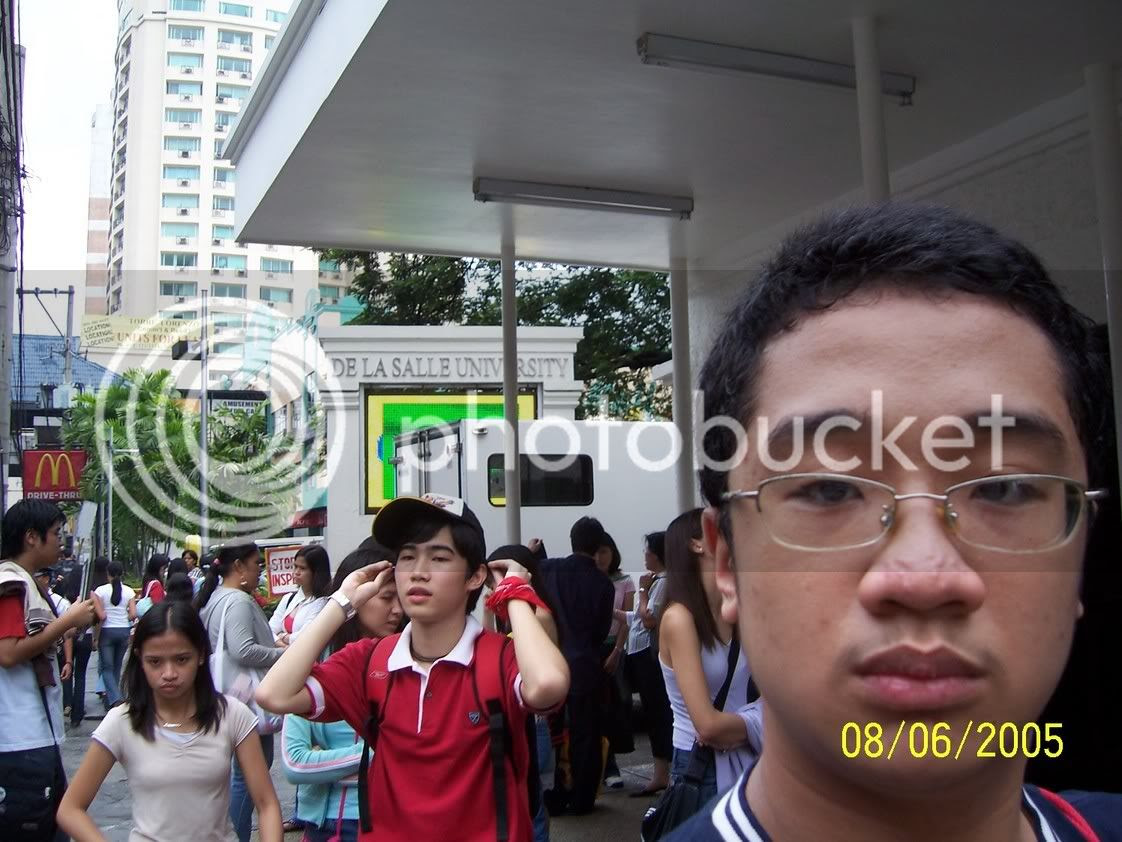 If there was one thing I wrongly did last Saturday, it's not to turn off the date stamp feature (or should I call it a bug?) on my digital camera. Suddenly all the images I thought would turn out good would be literally destroyed by this supposed advantage. But I've got nothing to do, so I'll just post them.

I arrived at the South Gate too early, so I ended up waiting (and meeting a few fellow froshies). I knew there were fourteen of us from the block who expressed their intentions to come, but only seven actually went. (Les decided to push through with the One Tree Hill marathon she was talking about somewhere. I don't understand why that really stuck in my head.) One thing I was panicking about is if we'd ever make it on time. I thought we were leaving at 12.30 - but not until realizing that only Derek and Jaja weren't there yet.

As usual, the volunteering (if not too user-friendly) blockie in me decided to call the two. Derek pulled out; Jaja didn't know she was supposed to be there at 12.30, and so she rushed to the assembly place and arrived with wet hair and every trace of a surprised person. (Nevertheless, I needed to call her. She was the only blockmate to go with Teamcomm.) We did nothing but talk about the weather, her wet hair, and look for some missing pearl (ironic considering her name's Jermaine Pearl - oooops). She didn't want me to show this photo but... 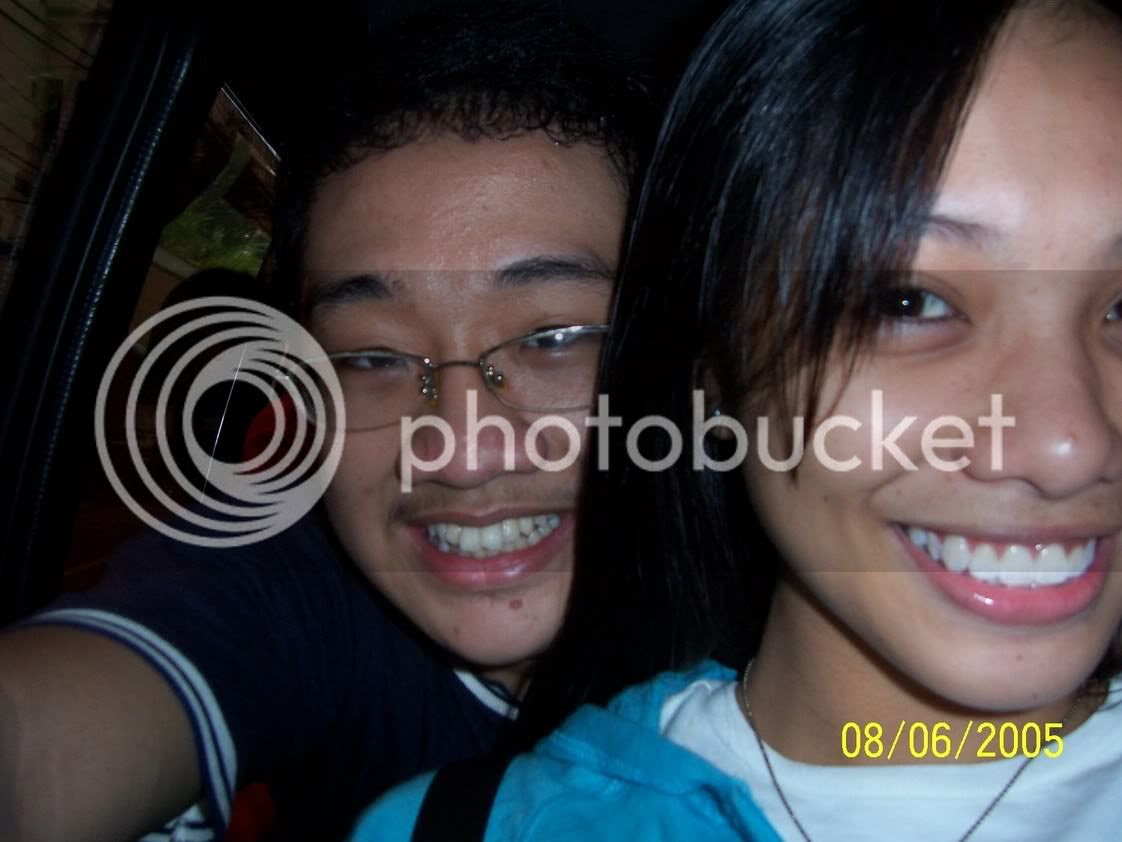 The others who decided to go - Sudoy, Jason, Jom, Loui, Dhi and Joy - were already waiting at the studios, and then we're off to go - but not after a few celebrities and, weirdly, a delay. We started late not because of us but because of the establishment itself. But we went to a hell lot of places (although it was dismaying to hear that we never got to go to the radio booth) - not to mention the celebrities.

First stop: Studio 10 (I think) where the ASAP 05 set is located. Upon realizing that members of Star Circle Quest (I think Melissa and Neri from batch one and Erich from batch two) were there rehearsing, I decided to act a little bit more normal. We took a lot of photos, and we (well, they, because I mostly took the photos) acted like celebrities and made one too many poses.

We would later go to the incredibly cramped Studio 6, where the sets for the news programs were located. Again, more poses, but more serious this time. But upon landing at the ANC set, we were suddenly crazy about being seen on television (at least the one on the set). Like we would be actually seen clearly. I think mine's a good example. Then, the Goin' Bulilit set - the best case of me getting starstruck, after seeing the really cute cast. Think of Aaron running around. (I actually have a photo of that, but I haven't uploaded it yet.) The others were starstruck (well, after seeing Mystica in person - she just got interviewed on ETK) as well. I don't know. perhaps we went there only for the celebrities, but it seems we were getting the wrong ones - Dhi wanted to see Bianca Gonzalez (you remember what I did last May?) but, obviously, didn't see her.

Everything else was a little rush of a ride - we were just walking around looking, snapping photos (and I ran out of batteries), and looking for more celebrities. We went to the Pilipinas, Game K N B? studio, the Wowowee studio (really small Studio 5) and the ETK studio, where we saw Ogie Diaz and Toni Gonzaga (uhh, I noticed the really thick make-up) interview Sarah Geronimo on an alleged relationship with La Salle's very own Japoy Lizardo. (Caresse must've been very sad. However, she must've been happy to hear the singer's denial.)

Then, we're done. Almost everyone (minus Joy and Jom) decided to stay behind and go around. We had dinner at Gerry's Grill (taking advantage of the merienda meals, which were available until 18.00, to save up), and then, we went back to DLSU (after passing by Sudoy's house and be amazed at the abilities of the mirrors).

I don't have much space (I think) - Jaja's blog has got a version with even more effort. As for the photos - I'll upload then later, thank you very much!

Nothing much happened today (like it is really insignificant, and the things I'm supposed to talk about are the same things I talked about last time). Let's just say some people got me really affected. (For once, I can say, Icka was irritated at me.)

Oh well, you can't please everybody. The last thing I'll talk about is something that surprised me: the death of Peter Jennings (like, you know Peter Jennings?) after fighting lung cancer. i remember waking up early and turning on the television to the Japanese channels to catch ABC World News Tonight and BBC Ten o'Clock News (despite being abridged and full of Japanese subtitles). It's sad to think that he died ahead of his older counterparts (the already retired) Dan Rather and Tom Brokaw. I guess it's time to leave the decks to the new guys. But anyway...

I obviously have too much time on my hands. Let me see if I can use that to do my Art Appreciation paper.
And your responses...