1/15/2006
It all whittles down to the same thing
I was looking closely at the photos me, Lau and Ariane took yesterday, and I finally got the thing that makes some of Ariane's photos pretty freaky. For some reason, she always gets to take a photo when people's mouths are wide open.

Remember Kaymee's photo? Then check this one out. 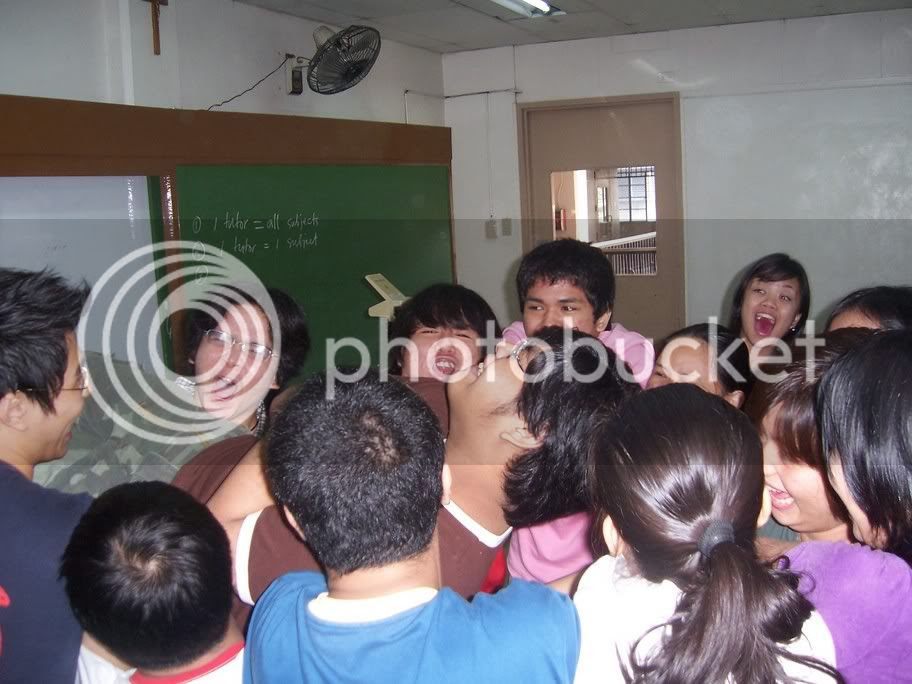 Okay. So probably the very reason this got stuck in my head was because I was looking too closely I saw Kizia and I got stumped at how Ariane does it. And this time, it wasn't intended to be as such. Or maybe we just got too excited over Sudoy doing the trust fall. But that was how excited we got, apparently. Think about it. Us guys catching Sudoy.

Thank heavens Ariane had another good photo. That one, it's the new photo that replaced my photo of Caresse. I'm going to change these things as times change. In fact, I've got a photo for February. (Yep, Jino and Ale from two weeks ago.) See, I've almost got everything ready.

Right now I'm at my grandma's house again, not yet uploading those photos on Fifth Year Holler because, again, I'm living on a slower-than-snails connection. Still, I never get failed to amazed at, for example, Jenn's latest post, or my lack of visitors on my Multiply site.

Someone visited my blog today - a girl named Frances, currently based in Canada (but I have a gut feel I should trust her tag more than the newspapers) - and when I saw a write-up on her on INQ7.net I thought I should be featured too. Besides, I'm a blog addict as well. Or so it seems. Anyone out there must support my act (or else). But maybe these words I'm currently saying wouldn't do any good. Hmm.

Stop talking, Niko. You're harming yourself.

Speaking of which, with my little statement it all whittles down to the same thing getting recurrent, I gladfully admit I haven't got anything to say again. Yeah, like before. I'm just making an excuse to write something down. But, again, I'm a blog addict. Nothing much can scratch that off, unless my enthusiasm fades away. But that's pretty unlikely, I guess.

Frances apparently found Katia as well, and again I wonder how she found me the way I wondered the same for Katia.

And, nope, I haven't opened the candies Kizia gave me yesterday. Strawberry candy, the ones that make your tongue go bloody red. Maybe I should take them next time, before it ends up becoming a souvenir or my little crazy thoughts.

See? It all ends there.
And your responses...

Oooh. France dropped by my blog too. Hmm.. hhahaa.