1/19/2006
Much bigger than expected
Again, I'll snatch one photo from Kim's blog. Jaja hasn't sent me her pics from yesterday, however, especially that one pic of the new couple I took... 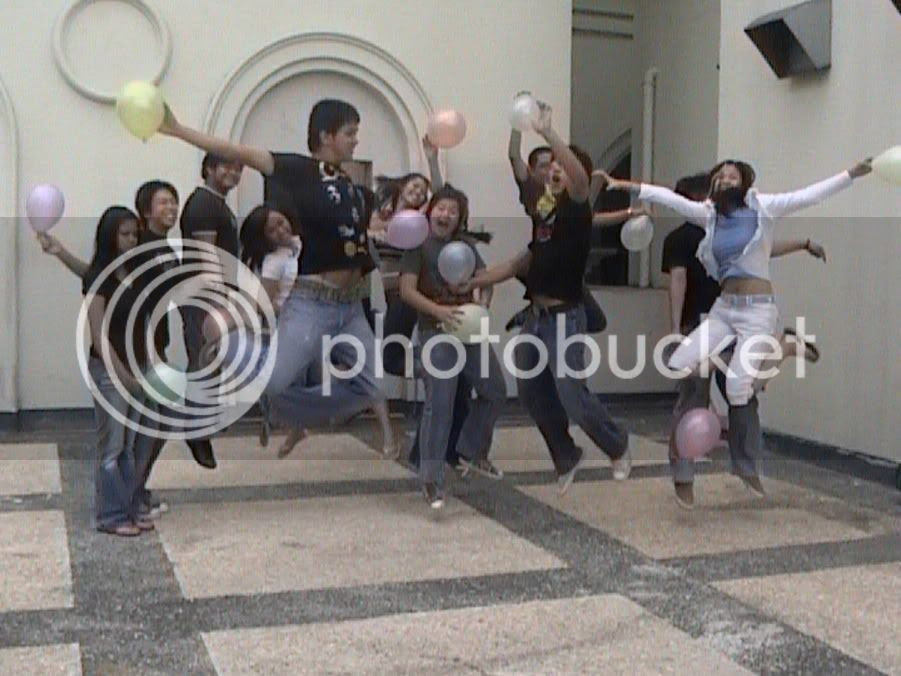 I just saw Sudoy in this photo, and... okay, so I'm laughing out loud.

Anyway, I'm now doing my blogging at the Cybernook after a conscious decision not to spend on an Internet connection for a few days. Losing money has now become a serious issue, so now I'm spending less, at least. That, unless I couldn't really control my hunger.

Biology lab class was tediously boring, because we all had to figure out how many calories we were taking. I was slumped with Joy and fellow classmate Therese, sharing a nutrition value chart, doing a lot of guesses and calculations, and getting unbelieveable values. I turned out to be taking in less calories than I really need. It seems the person you would expect to eat a lot (me) has been eating less all along. I didn't even know that.

Another funny thing, though, was what MC said: she would eat less, just to avoid the tedious listings. And to think she's not getting any fat. (Sorry!)

Filipino 1 class, and we were talking about our reports. AK unknowingly picked us as the first group to report, and the worst part (for now) is, I still haven't received any copy of the handout that we're supposed to read! I just came from the Department of Literature offices to meet Sir Vin on this one and, turns out, the other group from his morning class (where John and Tracy are enrolled) haven't returned the reading yet. So, for now, nothing much to read.

Anyway, we all have to present the report in a weirdly play-like manner. So, if I got it correctly, we have to present the whole thing as old people doing the laundry (but that's still tentative). We were there full of ideas that everybody else wanted to take (like that Wazzup! Wazzup! spoof that everybody seriously wanted), and we were somehow stuck. And I kept on pointing at Jason, for some weird reason.

Like, we could expect him to pull something like our Kyoto Protocol debate last term off again.

And, today, we had a really early dismissal in Psychology class. Looks like somehow, some of my classmates got so distracted after seeing a real human brain, with pins piercing through to show the division between the frontal lobe and the temporal lobe. I remember seeing Steph react just weirdly, and then compared the inside with the balut.

So, tomorrow, it's back to the pool. We don't have Literature 1 class, however, so it's going to be a lot more nerves for me. I did do okay in the water last time, but it still feels a little bit weird. I'm having the jitters just thinking about it. Well, supposedly, at least.

Oh, and Michelle? Your blog's not showing up. Get a new layout. Good thing you write short entries, and I know of another way to read your blog: your XML feed. Geeky, I know.

But flattered? Awww, shucks. Thanks!
And your responses...