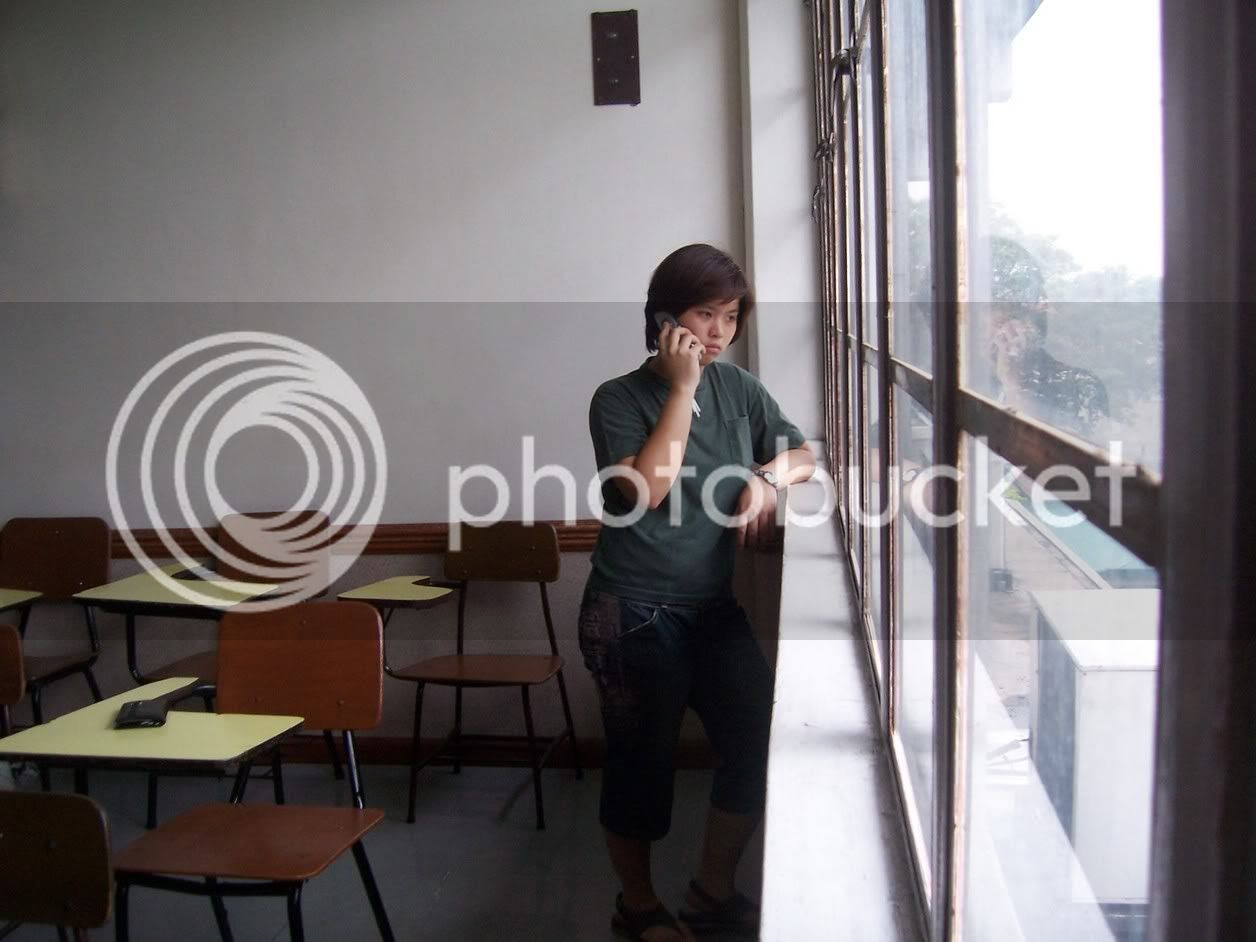 Right now there is this long line at the library depository, and I've seen six blockmates in it. I've waved at John, Jaja and Cuyeg, waved excessively at Icka, and got amazed at the looks of Jill and Malia. Well, Malia has this thing with her hair now. Sara just showed up as well, and I still haven't waved at her. And Derek was also here, inside Cybernook, checking out message boards before Icka warned him that he might be late.

Well, I've been waving at them in some weird way. If I'm in Cybernook, not supposed to shout in any way, then I could only communicate my thoughts through hand gestures. There goes, well, a lesson in Sociology.

So went the end of my day today, with me still a bit hungry, waiting for Jason. I still have to buy that Psychology book in preparation for the quiz tomorrow. Like our quiz earlier today (in Sociology) it's going to tackle two chapters of a pretty expensive book. But I'll still end up buying it. I somehow have to.

Today I hypothetically bang my head in the wall. I missed a word in our quiz, and as I expect getting nineteen over twenty (which is pretty normal) I got nineteen and a half points. That was in the second part of the test, which happens to be a matrix board. I got training in this, admittedly, in the many similar tests our Anima modules gave out, so I ended up perfecting my searching skills. And it was just one word that didn't appear on the board itself. Well then, since I could still get a 4.0 on that one, if I got the first part perfect.

I'm getting to know a lot of people in that class. Aside from MC there's Sam, the guy in that Road Thrill shirt I was talking about a few posts ago. He was swimming in the pool when I went in my first swimming class, and jokingly suggested that I take up snorkeling instead, even showing me his snorkeling gear. Then there's my seatmate to my right (have I got your name right? Abigail...) who asked me earlier about studying for the quiz. I admittedly crammed on it since I was reading weeks before. (It isn't cramming, even.) And, I get to sit almost in front of the teacher.

Miss Wright forgot to upload (this time) stuff for our Literature 1 class, but I still like her nevertheless. She was flinging her hands in the air in confusion at times. The way she was relaying her story during the first EDSA revolution back in 1986 was a bit hilarious as well (I don't remember that Visayan phrase she mentioned). Sitll, I get to drill all the sense we are supposed to be drilled with. However, I wonder how things would've turned out if I got a slot in one of Miss Sangil's classes. As far as I can see, I've got classmates reading from the textbook going I've gotta read this now for there might be another surprise quiz, and I wouldn't wonder why, for some sectors, Miss Sangil has got a little reputation. I think it was MC who said that she and her friends were consciously shying away from enrolling in her classes. Well, I couldn't blame them at all.

At least that is my little assessment for the day. We didn't happen to have Philosophy 2 class today, since Sir Marollano went to Butuan City. And, at least, I can find it a bit possible for me to go to the PNPRS lecture slated for Saturday, even if I'm going to be a little late; CWTS turns out to have a quota of twenty-four hours instead of sixty. So, we have to stay in Barangay Tagumpay for around three hours, instead of six to seven. Besides, how can we tutor kids for that long without making them extremely bored?

Somehow, I could say, I've finally gotten the hang out of this block split. I'm used to the early wake-ups, the fragmented coordination efforts, the many faces I couldn't have just seen in our LPEP, and the lack of familiar faces I've grown to see for so long. I could still go on and ramble about missing a few people, but slowly the other faces are becoming familiar. And, at least, I don't have those fitting in problems I've whined about a few months back. (Right now somebody from Filipino 1 class approached me asking about the possibility of surprise quizzes.) And, everything maintains the possibility of surprise I've hated for so long. Turns out I'm beginning to like that feeling of surprise that has always greeted me ever since we started this term.

We did get used to it. Amazing.

So maybe it's time for us to leave each other, aside from the little hey there spottings and the lunch breaks that would slowly get rare. But maybe we better not turn our backs on each other, shall we? I mean, it isn't really going to happen, but maybe the time will come when we really need each other, and we've severed so much. My parents still keep in touch with their college friends, and probably yours, too. When we do turn thirty - or forty - we would need the connections, and everything else. But you can look at this in a negative light though. You, you hanging-on person you...

Although I still have to get used to those I miss you statements, either from me or you guys, it's going to be a little different, yes, but maybe a bit better this time.

Is this enough to get our block nominated for best frosh block in Fast 2002's little awards thing?

Well, maybe that's all the cheesy, clichéd stuff you can handle. I'll go on and eat lunch, wait for Clarence to get some cellphone credit, and study for my Psychology quiz tomorrow. You've got to look at the photos from Saturday, though - I've got them all up. Till then, it's a little, sweet, nonsensical goodbye. Oh, wait. It isn't any closer to a goodbye.
And your responses...