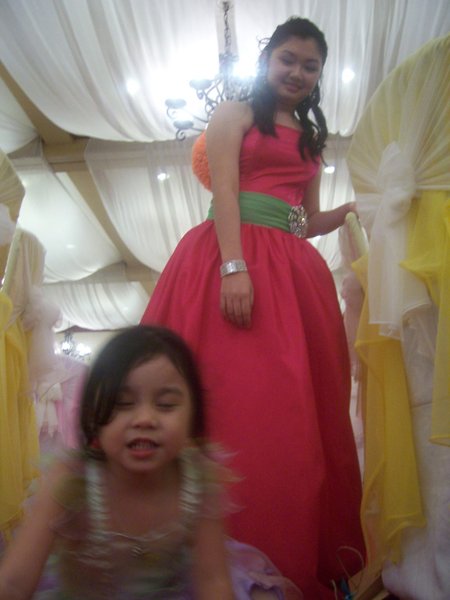 It was rainy, and typhoon Milenyo meant this could have almost been postponed. Jackie, ever optimistic, wasn't about to budge. "At bakit di matutuloy?" she answered last Thursday. "Tuloy rain or shine!"

And indeed, it pushed through. Despite the fact that less than half of Manila had electricity - I think Villa Immaculada was powered by generators last Friday - "fairy land", as the invitation put it, was ready to accomodate another one of its fairy princesses, and she's one that we know. The hype for Jackie's debut was there since last term, and obviously a typhoon wouldn't do anything to suspend our expectations. I was willing to run late, actually - I arrived thirty minutes after the announced start time - and when I arrived, in what I imagined as a sick attempt to recreate how Cosmo looks like, nothing's started yet. In fact, the PAs (Jaja, Dhi and Kaymee, I believe) were worrying because Ariane, one of the hosts, wasn't there yet. Kizia, long prepared with her pair of wings, was long ready, and a last-minute scramble for a replacement commenced.

Martin almost wanted to pass it to me. I refused, saying chemistry would be a really huge problem. He took the job and made a much better job than I could do - I mean, it wasn't the adlibs, but the way he delivered it. Or we just missed him that much.

It was a really organized affair. I mean, most of LR19's girls in attendance had some participation, especially with her grand entrance, where she almost stumbled as she sat in her swing. While all that was happening, us at the tables, already confused because the table numbers were changed in the middle of the event, were just having fun, either at Martin's remarks, or the dances, or the make-up, or just having small talk. For once, it really was fairy land: I actually forgot that I'd be going home to a rainy subdivision in Cavite without any electricity or water supply. Were we in some sort of trance?

There was this observation, about debutantes having this different aura. Event spotlights, plus the happiness, plus possibly the make-up. You'll get it.

Nothing much about the buffet tables, but two things caught our attention. There was the shrimp, which Kim, Jill and I somehow feasted on. And then, there was the dessert table. Much more, the fondue table - I was all too conscious about messing up my necktie, and then there was chocolate. A fountain of chocolate, and the occasional remark about whether you could dip the shrimp in chocolate and eat it as if it was a marshmallow.

There weren't much teardrops, either - I don't know why, or I was just distracted for all the wrong reasons - but there was also some fuss over the wings that the girls were asked to wear. Some of the eighteen knights (make it guys asked to walk in front) decided to wear those wings - plus Sudoy in a red cape that grabbed more attention, I guess. Then there was Jason, and everyone's attention was on him - of course, after what happened exactly a year ago. Whether he still likes Jackie is obvious, but whether we have gotten over it is much more.

Funnier, two other guys from high school were placed in a similar contention for Jackie's, err, heart. Then the uncle comes to talk, and says something along the lines of "if you'll court Jackie, you'll have to court me."

Then Jason goes in front - of course, the knights have to say something to the fairy - and announced he's willing to court the uncle. That just adds to all the confusion.

The BonoSoc pushed through with their surprise this time - disguised as simply Ale and Jino performing, it all because obvious when Lau walked wearing a hood and started mocking a rap. It progressed, however, to a little hitch with them trying to form Jackie's name, and Huey finding himself in the wrong place. The moment they were to shout "Jackie!", Huey ceremoniously announced, "ay mali!" A little fix-up, though, and everything's all right.

In the end, of course, there were the disco lights and the dancefloor, and in the middle of Love Generation - by this time most have left but us and them - Clarence went to Jino, I went to Clarence, and we have some sort of groove train coming.

I was sort of distracted all along, really. There probably was a lot of surprises coming up, even if it seemed very predictable in a way - or it could be the fact that the airconditioner's getting into me already, because I missed it. It was still fun, though - not to mention that I have photos, and not-quite-crazy ones at that.

I could've gone home a bit depressed, I'll admit. I don't know. Maybe it was time for me to get back to reality, but heck, the fairy land theme was very much effective at making me forget what's actually happening outside. All the optimism regardless, everything still worked - and I had some fun, or at least I got some much-needed escape from two days (supposedly) without classes.

So who's turning eighteen next? I'm sort of waiting, I guess. But not until I remember everything about Friday night - and what I'm supposed to tell Jackie sooner.
And your responses...

nice article for jackie, too. thanks for visiting my site. if you're gonna ask me, i'd choose blogger over blogger beta. i wish i could revert back to blogger, but once you've upgraded, there's no turning back. :(