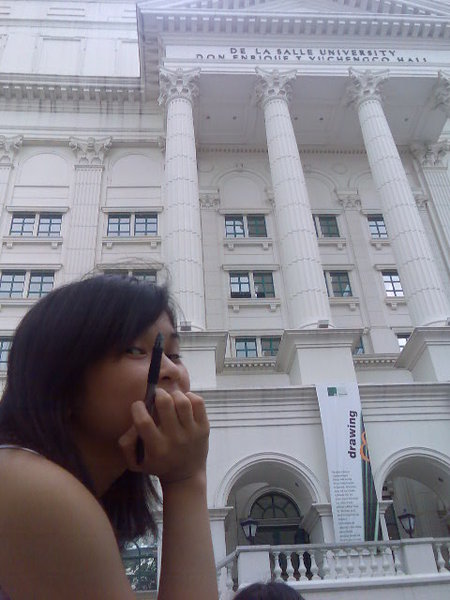 Consider me guilty. As of Thursday night, this photo is my mobile's wallpaper. And yes, I was sort of excited for this, because somehow I was surprised my mobile snapped a photo this clear. Oh, but I blame the lighting for it - a perfect sun, not too harsh, plus windy conditions at the amphitheater (which doesn't really make any difference, but it helps mentioning that).

I've been struggling to send this photo to Ale via Bluetooth. As it turns out, I'm one of the few people, if not the only person, to not be able to send stuff to her Bluetooth-enabled mobile. (Why Cuyeg gets to send her stuff, presumably, is a reason for confusion, for we both have Nokia phones.) Well, I haven't sent her this yet, but the closest I ever did to doing that is to show it off. But, of course, my mobile's fancy screen means I have a standby display that looks like a magazine cover. I think I showed it to Ale twice yesterday; the last time I did, on our way to our three-hour class, she blurted out that I have a crush on her.

And somehow, I thought I did, again. Oh, my crazy thoughts, it isn't. Lau and Huey were there when she said that, and the former just laughed. I reacted, then she quickly mentioned that I had a crush on her before. That I was meant to say, and I agreed. The walk continued.

I kept on showing off the photo. Somehow, some didn't get who the person was, probably because of the way Ale looked at the camera, or how I tried hard to make the photo show only her and the Yuchengco building. (Sara's head, though, still appeared.) Ian probably had to contend with too many readings to the point that he didn't recognize it until much later, if I remember correctly. But, even more weirder, I find myself looking at the phone once in a while. Then I snap myself out of it. Oh golly, I thought, I take such good photos.

Before we went home, I had the chance to talk to Kizia about the poetry festival. We have only around a week to discuss everything - from the poems, to the blocking, to the portfolio, to the rehearsals - and yet I'm not doing anything about it. I didn't notice she had a haircut, which made her look like one of those 70s icons (or, if she was warped into the present, she's wearing a wig). Inevitably, our conversation would drift to the hair. At least, I said, she'll have a new look to show for the recital; she complained about the routine blow dry she had to do to keep it bouncy.

Outside M206 - when those taking film at the other room are still, well, not dismissed ten minutes from the bell - I ended up going home alone, but it meant finding a seat at the bus and staying there throughout the trip. A supposed meeting has been moved because nobody could come, even if Huey, a fellow committee head, was still in the campus when I walked along SJ Walk, playing the same song over and over again.

I didn't really have to wonder much when I sat at the bus, half my body peeking out, resulting in some discomfort. I thought myself that the reason why I pondered over some things during the past weeks is because my current plot twist found itself finishing before it could even start. I'm slipping into something comfortable again, although there are still times when I enter a room and suddenly feel nervous all of a sudden. I just don't get it, though. Then again, things are meant to be complicated.

Cue Kizia walking to the classroom with bouncy hair. It takes a blow dry every morning, and not everybody can afford that, right?
And your responses...