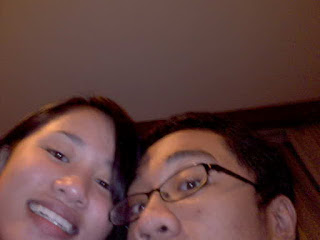 So we indeed kept on hiding Meg's mobile last Saturday, for the reason that she's utterly distracted by the brownies she decided to serve. One time, someone (can't remember who, but I do remember he's from the COE) hid it under the table at room 816 of the Discovery Suites. The other time, we - me and Jenn, technically - hid it in different sofas before we decided to place it near the brownies themselves, just to add insult to injury. It was weirdly amusing, and when Meg found her mobile for the second time, before the two of us left, she vowed to hold on to it.

I wonder what happened next? Well, aside from debutante getting a haircut and look good in only a few angles, as well as excessive singing.

I left the Discovery Suites at around 23.00, spending a good five hours trying to get in the room itself - we can't for we need a key card to the room itself, or a confirmation from the people up there - as well as eating, taking photos, scare each other out, and of course, hiding Meg's phone.

For me, though, it wasn't much. Lau didn't come, but Jenn came, and Meg vowed to expand my network while Steph (another Steph) was fixing her up. I met the latter at the elevators; we were there by 17.30, and to be specific she was the one who first tried to go up and was asked for the key card. Then I texted Meg. Then she asked me whether I was going to Meg's, then we went up together, but not after lining at the front desk and having Meg go down, ceremoniously - with partly wet hair and a claimed bad mood - to request something to the front desk themselves.

Turns out their phone line was also bust, so nobody could call them up for the confirmations we wanted to get.

I was a bit fixed up, without expecting that we are going to a room, and not a function room. (Actually there was somebody, whose last name was also Lee, who had a function room reserved. I think some of the guests - was it Tina and Mafe, among others? - who went up there and was surprised to see guests in formal attire.) And it was going to be some informal dinner plus retreat-like fun, complete with the sneak-ins and the surprise guitar. Oh, and of course, the Magic Sing unit, which was initially relegated to merely a microphone attached to the television as the guys played rock songs on acoustic guitars and sang to them. Meg was initially warning the guests that she didn't cook any of the food; apparently we were all waiting for the brownies (or as she insisted on calling them, "chocolate bars") that would serve as the birthday cake, and one she kept on feeding on for most of the night.

As for me, my network was indeed expanded, although not that much. I still left without knowing most of the guests and realizing that I already knew some of them - Mafe from Filipino 1 class, Thana from Religion 2 class, Ivy from the Get ORGanized booth, and Tina from Ale's Literature 1 class where I acted as unsolicited stage hand. As for Steph, well, she surprisingly got a bit of my hyperactivity while we scared Meg about that surprise handprint on the window, which turned out to be her cousin's.

Two days later, it was Dhi's turn to turn eighteen. Well, nothing much happened, but I do know she treated a few to Yellow Cab, for I ended up eating the leftovers with Cuyeg. And, she has a new phone, although as far as I know she shouldered half the cost, but still they were taking photos like I suddenly found myself doing. Because of that, also, she got a birthday song in film class, led by none other than Sir Doy, because we all wanted her to lead the prayer.

Everything, though, was the perfect distraction - I pretty much forgot to pass by the Student Council office and get that apparent invitation that batch president Sars texted me Sunday night. I just got it today - when Steph got me to the SPS building, releasing her stress and got subsequent bonding time - and realized it was an invitation to what my dad amounted to an elite club. (Jason also has this invitation, apparently.) Errr, call it a group of corporate leadership seminars, ironic for I don't see myself in such a position, unless it's a radio station with me and Issa as breakfast presenters.

And tomorrow, it's Toni's turn to turn eighteen. On the first of my Filipino 3 research periods (or free cuts), I find myself without a class, nor an agenda, except probably for another SC meeting and the chance to have a photo with Mo Twister. Or Andi 9 - it'd be much better, I guess?

We'll first have to learn to do consistent present tense usage, and realize that despite all this madness we're still in it for the project we have to work on. And yes, dear, there are a lot, like you do.
And your responses...