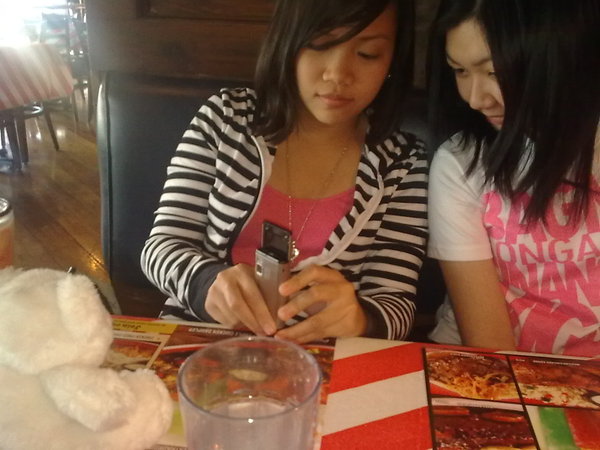 Suddenly I found myself walking a couple of kilometers.

Thankfully I had an idea where I was. Ayala Avenue can only get you so far, and in my case, after three pedestrian underpasses and a handful of familiar buildings, I found myself at the sliding doors of Glorietta 3. I was only walking for fifteen minutes - never mind the fact that there were jeepneys passing by - when I felt a pain that was familiar to me, especially since I was in Singapore a few weeks back. And then, I thought, I should've brought a different pair of shoes.

Jackie and Ariane, on the other hand, were just seated on one of the couches at Glorietta 4. I was supposed to be there at eleven in the morning, but I arrived an hour later, which is obviously something that I didn't want to happen. The funnier thing is, I was the one who set the call time, since I was the one who organized the thing, and I was the one who had the money to spend.

Yep, I figured it was just an excuse to go out.

"On call naman kami lagi ni Ariane," Jackie posted on my Facebook page at the beginning of the year. With that in mind, as well as the fact that she just left her job and moved to another one, I decided to just call for a meet-up. I figured we'd celebrate the fact that she's left her job; it's no secret she wasn't happy there anymore. Inevitably the thing was about my birthday, and someone with disposable income was bound to treat someone to something. In my case, it was lunch on a hastily-arranged Saturday, when one was out to work and another was out to a doctor's appointment. I had everything planned out, as it should be. And everything, well almost, didn't go to plan, as it should be.

"Nagdadalawang-isip na ako kung magta-trabaho pa ako sa Makati," I quipped when I finally got to their couch. Before we knew it, I was walking again.

Lunch was at TGI Friday's, since another part of our plan failed, and I ended up shelling out two thousand bucks. Jackie paid for dessert, and Ariane was happy to be the one with the lowest salary. I was saved by a P500-off voucher that I got when I got into the mall - a silly coincidence, perhaps, because I thought I wouldn't have any use for it when I decided to take the thing from the lady at the entrance.

Obviously, though, I wasn't in it for the food, but rather, for the company. As usual, I wasn't disappointed, although it wasn't really a catch-up session like most mini-reunions go. I thought we'd talk about Monday, as was half-promised during those online conversations when we were stuck on our desks at our respective offices. Instead, it was just one of those conversations that we used to have in school. The thesis partners were talking, and I just nodded in agreement, feeling bits of isolation until I find an opening. We were only faced with huge slabs of meat, and later, small desserts.

It was a big deal for me, though. I'm not the type of person who goes out on weekends. Well, that, and my friends don't invite me to anything, unless it's a formal occasion. Then again, we're young professionals - I shudder at the "yuppie" term, really - and, as was argued time and time again, we're somehow free to do the things that we want, or at least those within reason. Doing something that everybody else around me has been doing for ages - weekend trips at the mall, DVD afternoons at someone's pad, bar-hopping at some "kewl" district - is actually liberating. Never mind spending all that money. Never mind feeling bad when I saw my bank account only had that much money left, even if I spent a load on food for my birthday, and a load for treatments in the dermatologist, and a (badly-placed) load for a haircut.

We ended up watching The Curious Case of Benjamin Button, after both girls were done with their respective obligations. You can't just have lunch at a strange place and go home immediately afterwards, right? I ended up going home teary-eyed, reeling from having to cry at the cinema two times, and even finding a need to hug Jackie, while we were all still seated, as the credits flashed. At that moment, I just wanted to go on. It felt like I should've gone on. I believe it's called liberation.
And your responses...

Okay, this is a shooort question..
How was the Curious case of Benjamin Button? :p
And, yay you finally have a picture >:) haha!

Have you ever thought of publishing a book? I know one girl who would buy it :) I envy your knowledge when it comes to English Literature :)