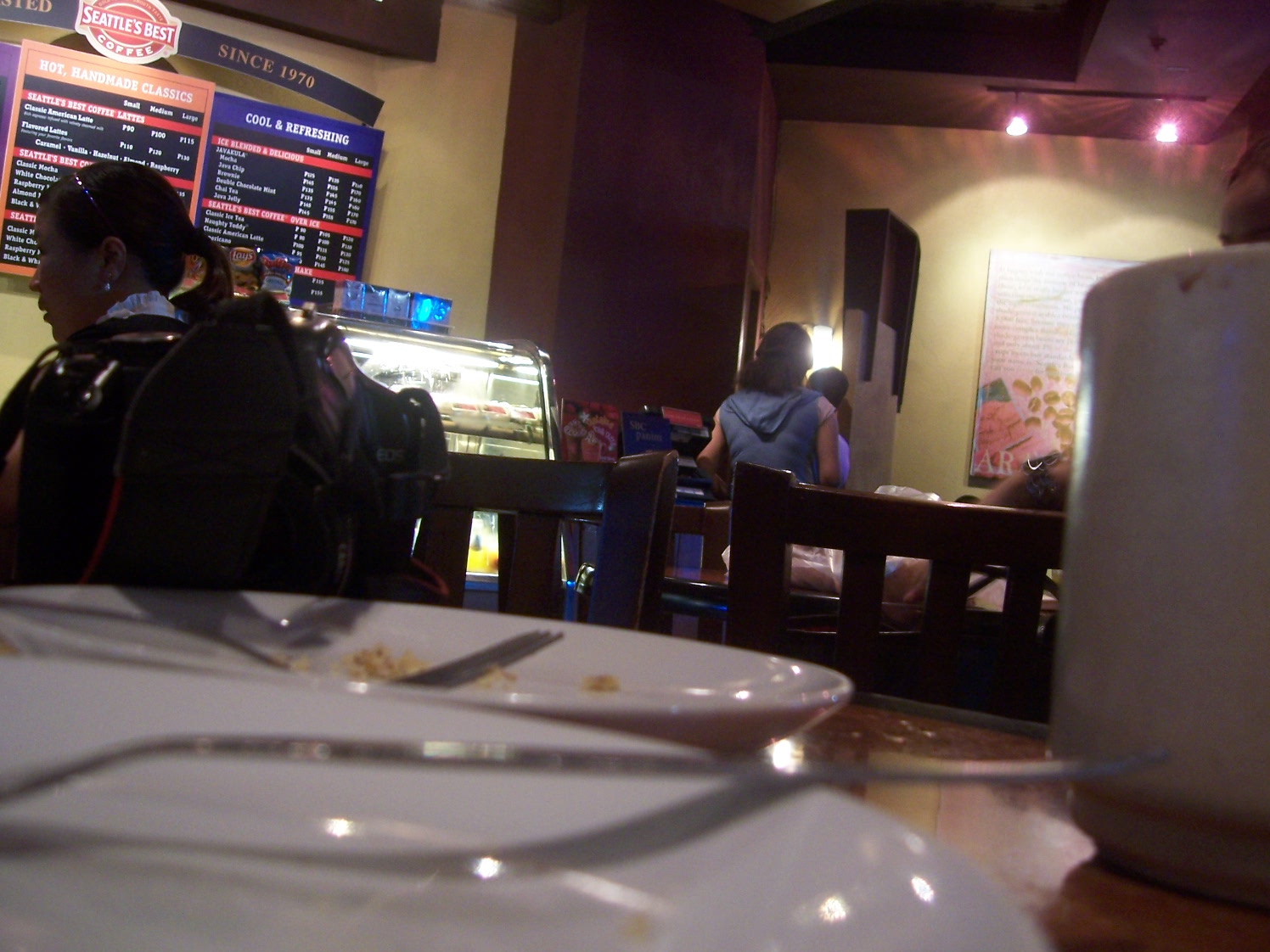 "I disabled my Facebook account for a week, not because I know you will tag me. I'm trying to avoid someone else."

I'm not sure if it's in straight English, but considering we talked two-thirds of the way in English I might as well take that observation to heart.

And no, no names. That was the loophole.

I think I broke a couple of conventions last night.

One, a guy is supposed to be the one to spend. "When you're meeting someone," she quoted a friend, "don't spend your own money. Don't bring your own car." She didn't bring her own car, but she spent on everything. "I'll buy you hot choco from Seattle's Best," she said last week, in an attempt to bribe me for something I didn't really need to be bribed for.

So she did spend her money, in part because I don't really go to Seattle's Best. "The nearest to my office is at Tektite," I said. "To our house, at Festival." In straight English, although we don't really have to. "I've been writing in English for years, so it just happens," I said. She treated me to this mug of hot chocolate. She'd call it a safe choice.

Two, a guy is not supposed to dominate the conversation. I don't feel comfortable already telling all these stories about myself. I remembered what I read last week, again on Esquire: "Just be quiet. Please. For her. Stare into her eyes and be quiet."

"I don't have much to talk about anyway," she texted me the morning before. "I'm the listener type. Even if it doesn't look that way."

It doesn't. The stereotype goes like this: someone from the south who you'd probably find in a bar. She admitted that.

But it's not as comfortable to be the one asking questions. There will be, of course, some things that you are not supposed to go to. The compromise was the very thing I didn't want to do: dominate the conversation. I was the one telling those little anecdotes about work, and she'd be the one listening, at least until I'd realize I'm saying too much, during which I'd stop and just stare into her eyes and be quiet. And she'd talk.

The thing is, I'm not supposed to overthink this. "I am socially inept," I said, well aware that I'd never use that description on myself, especially when pitted against certain people. Only I now think things are the other way around. Certain people do better than I do, which is why I was the one who had to be invited to coffee, rather than the other way around. Heck, I'm probably so anxious of everything that I can't even invite my friends to spontaneous things on weekends. Too many thoughts on my mind. But I might as well make the most of it.

We left at around nine, I think. She took the MRT from Makati to Ortigas, and my shuttles home are gone at this time, so I figured we'd both take the bus. Along the way we'd talk about her being anything other than human, or being somebody on the fringe. Say, some Satan worshipper who has to offer a sacrifice, like chickens, or as I suggested, turkeys. The sacrifice is in the importation. Or, you can write "turkey" on our chickens.

We got to the other side of the road, and I realized there's still a shuttle waiting. Three, a guy is not supposed to leave a girl hanging. But I was selfish, or sleepy, so I pretty much did. I told her I've got my shuttle there, but I tried to find her a bus, and she found herself one, and we hurriedly said goodbye. I turned back, only to see the shuttle leave the terminal.

"It will take you up to eleven?"

It did take me up to eleven, but at least I got home.

Four, a guy is supposed to say thank you, especially with the circumstances that saw him defy all of the conventions of proper social interactions. I really should rethink calling certain people socially inept. Provided it still matters, that is.
And your responses...