5/14/2010
Project Allison: the photograph
I'd like to think I'm used with dealing with celebrities. I haven't met a lot of them, but I had to deal with some during my college life. Remember, say, that little story with Karylle?

Then again, that was circumstantial (and still fun to look back at). This wasn't. This was something I looked forward to. This was something I pulled heaven and earth for so I can go. I don't care if it sounded right, because surely you get my point. That, and that being this fairly big Allie fan, this guy who shed tears when she got eliminated on American Idol, I should at least get really giddy when I finally get the chance to meet her.

But I told myself to calm down. The concert was over, and everything else that happened after - that'd be a Q&A session and a surprise birthday cake for the recent debutante - was also over. It was a bit chaotic. Valerie and her girls have left for the comfort rooms, which were a floor up. I was just breathing easily, partly because I lost my voice without screaming, and partly because I felt the excitement spiking up inside me. No, you cannot be excited.

Still, the fact that the girls had my meet-and-greet stub had me restless. But maybe not as restless as that Mika girl. She was around 14, I think. She sat a few rows behind us. She was this Allie superfan. She answered one of the Channel V VJ's pre-concert questions - too easy, except for the one about "the Philippines' best music channel", where we got dumb yet amusing answers like "American Idol" and "channel 3" - and she also got to ask a question to Allie herself during the Q&A session. Apparently, when she finally got the chance to meet her, she touched her red hair as the camera's shutter went click.

And then there was this other Allie superfan. "When will your next Twitter party be?" she asked, referring to one of those hours when she sits down in front of a PC and answers any question her followers might have. Valerie's an expert in these things. She's done some of these "twarties" David Cook holds. "It's just a matter of timing," she once told me, only that meant staying up in the wee hours of the morning. Never mind.

The lines were already forming, and they were slightly chaotic. But it could've been worse. "Nung pumunta dito si Jason Castro, the organizers grabbed everything and gave it to him, tapos kukunin nila ulit saka ibibigay sa'yo," Valerie told me. "Yung inlay nalukot. Well, di naman lukot na lukot, but... gets mo?"

The only instruction was to get our inlays out. "Allison will not sign anything else," the VJs were very mindful of saying. So much for those photos Jean had printed.

I was the thirtieth person in line. I watched Valerie just hug her. She'd later admit she had a slight headache and, oddly, didn't know what to do.

I, on the other hand, was rehearsing the scenario in my head. Not something I should've done. The scenario would be too fantastic. I wrote this about you! Too fantardy. Too impossible.

I went up the little platform, pulled out my CD and pretty much felt like someone who's done this before.

She signed the CD. I gave my camera to some guy. He pressed the shutter. The flash went on. Yes, the flash went on. And I told myself, never mind the flash, you'll never get another chance at a photo. And then I turned back to Allie and I shook her hand. "Thank you very much!" I said.

Yes, I shook her hand.

This, coming from a guy who admits to preferring hugs more than anything else.

I just shook her hand.

I stared at the photo that guy just took. I hated the flash. I didn't smile. She didn't smile either. She looked tired. I understood that. She was probably battling jet lag. In fact, when I almost bumped into her at the Paragon, I literally said she "looks dead". And again, I hated the flash. And I thought, I could've gone a little bit closer to her. That'd be a better crop. And then I saw some little kid - an eleven-year-old boy, I think - grab his camera, point it at both of them, and press the shutter, and I imagined it looked better.

Yup. Regrets always have to come in last.

I got home at around ten in the evening. I don't remember what else Valerie and I discussed on the bus ride to Las Piñas. I'm pretty certain we talked about the elections. I wasn't feeling too crazy. I got home and it didn't feel that much either. I uploaded the photo, and I slowly got used to seeing my face beside Allie's. Nada.

It took two days for everything to sink in. That's when I decided to read MJ's take on the whole event. She's an American Idol blogger, one I read a lot for work. I spotted the videos and went through the comments. There are things I wouldn't have bothered knowing about. Talk of weight loss. Talk of T-rex arms. Talk of our response being more than enthusiastic than the Americans'. And then I realized I was in one of the videos. Or all of them, since I sat in front.

And then I realized she was thanking us profusely. Thanking me, in a way, profusely.

Something happened. I jumped the line - that line I never imagined jumping, not before Tuesday, certainly not after Tuesday, even if it involves Siobhan Magnus in a better venue - and became more than a fairly big fan.

"So I was reading MJ's article on Allie's gig," I texted Valerie. "It finally sinked in." 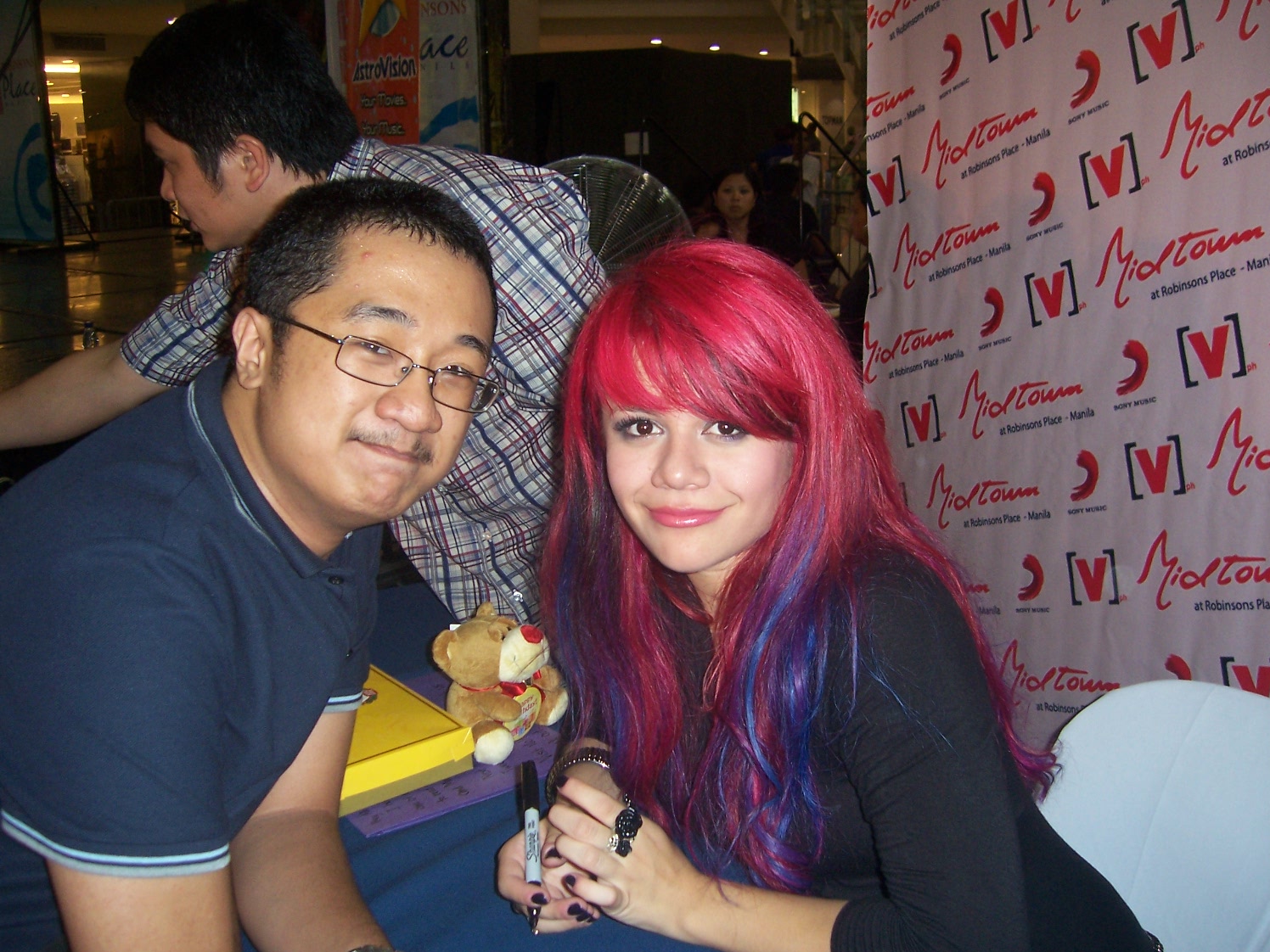