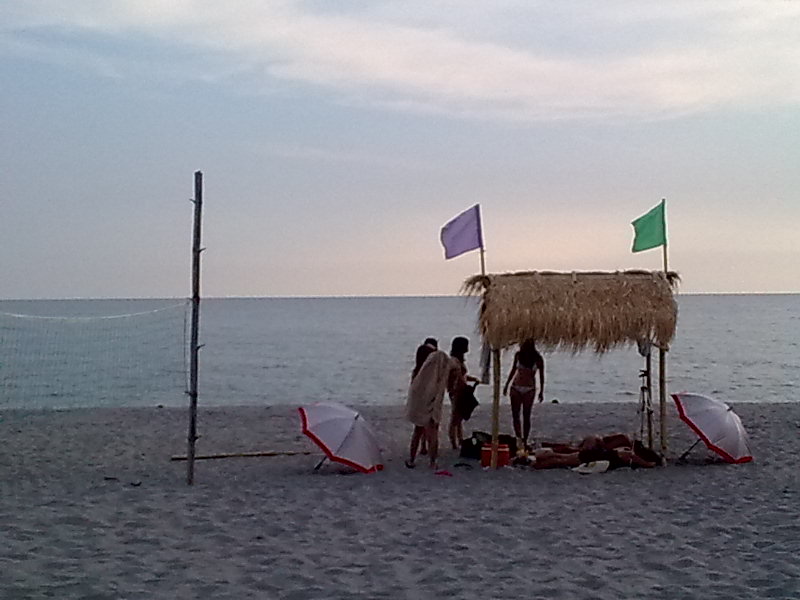 A few weekends back, Anna flew to Boracay, and observed on Facebook that the girls go there to show off their bikins, while the guys go thee to ogle at the girls.

I would usually agree, but things never really went that way.

Contrary to what I told certain people, I'm not really fond of beaches. Sunsets, yes. Digging in the sand and unleashing the inner engineer in me, yes. Beaches, no. There's something about it that makes me cringe. It's the thing that separates land and sea: a small strip of sediment that keeps dangerous water away from the safety of the mountains, or the plains, whatever's nearer.

And then there's the insecurity that builds up inside as I see boys and girls showing off and having fun. Sure, there's a dozen or so guys with big bellies to every Derek Ramsey, but as much as you want to keep it real, you can't help but despise those big bellies and look at that six-pack. I'll never be like that, I'll eventually, think. What's the point of going here if I'll feel bad about myself anyway?

That's been a struggle of mine. I don't think about it often - it only happens when I'm on a beach - but I'd still refer to it as a struggle. I've been to three beaches in the past calendar year, and I've had difficulty trying to figure out how to enjoy a vacation at the beach without having to swim.

Ironically, just when I learned swimming - when I accidentally took up such classes in college - I decided not to take a dip every time the family heads on a swimming-related vacation. The least I did was stand on the shore and let the waves crash on my lower legs. To me, it always felt like the very point of a beach vacation: an existential escape.

I got just that when the family went to Panglao in Bohol at the end of last year. It's got (fairly) white sand, it's got rows of restaurants, and it's got foreigners, but it doesn't feel frantic. I guess it's because we went in December, but I have the impression that it'd be that peaceful regardless of the time of year. It's a small island that keeps its provincial charm - it worked until I had an asthma attack triggered by the capiz lamp in our room - and it seemed the locals wanted to keep it that way.

One afternoon, a rowdy tourist decided to hire a boat and equip it with large speakers, cranking it up and blaring party tunes. "Happy New Year's Eve!" the guy, presumably drunk, said. I was lying on one of those beach beds, reading a book, and getting annoyed that just when I started enjoying myself - this was before the asthma came in - this guy comes along and forces his idea of fun. Thankfully, he was apprehended, or so I was told, because the tunes just died ten minutes in.

The opposite was true when we went to Boracay last month. Of course, it's Boracay, home of several dance parties and boatload after boatload of beautiful people, the sort that seem to say we're cooler than you because we're being ourselves, and you cannot be like us even if you try. When we went there, a couple of events were going on, both extremely commercialized and catering to the Manila crowd who prefer to party, or show off their beautiful bodies through designer swim wear. Exactly what Anna said.

While my sister and my cousin tried to ogle at Derek Ramsey's six-pack, I was trying to do the same thing I did in Panglao. I bought a travel magazine - it's ironic buying one and reading up about other places when you're in holiday, as if you don't want to be there - and lied down on a beach bed. It wasn't noisy, but it sure was frantic, and everywhere you looked there was someone who looked like she'd kick you out for not looking like the partying kind.

There were two girls who chatted on the beach beds beside me. I sneaked a look. Sexy, I thought. They were the sort that studied in Katipunan, hung out at Eastwood and went to the beach frequently, like that day. And then they stood up and I noticed stomach rolls. Society dictates I shouldn't go for that. I felt queasy thinking of the consequences.

And that's what I saw everywhere I went. In the restaurants, in the hotels, and especially on the beach, there'd always be people who remind me of the people I had small, insignificant crushes on. You know, the sort of people who watch Gossip Girl through illegal downloads and drink cocktails every weekend, the sort who'd wear anything and look cute, the sort who sport bangs and lots of eyeliner. I feel insecure, knowing that I often like people I know I cannot attain, and knowing that I'm surrounded by them. I also feel bad for myself, since my taste in girls are becoming questionably shallow.

I'm not getting that feeling today. I'm blogging from the town of Botolan in Zambales, at the very beach where Regine Velasquez and Piolo Pascual fell in love for the cameras. It's really quiet, but sometimes it doesn't work right: the beach itself looks desolate, with no trees, and the sand is gray, possibly because of volcanic ash from the Pinatubo explosion almost two decades back. But I easily settled in, watching my cousins swim while I stand on the shore and being existentially emo.

There was this group of girls, seven of them, wearing string bikins and not looking like they shouldn't wear one. I had something else to look at, and they're not the sort I'd feel bad looking at. And then they'd leave the beach and head to the showers, and you'd hear them speak in English. A lot of it.

"You mean the hammocks?"

And one of them, the girl in a white bikini set that's got shoulder-length hair and bangs and that air that she knows her stuff, looks like a man when wet. Must be the eyebrows, which were bushier than I'd prefer. Only then do I finally realize that, for a relatively lonely man, I'm very demanding.
And your responses...