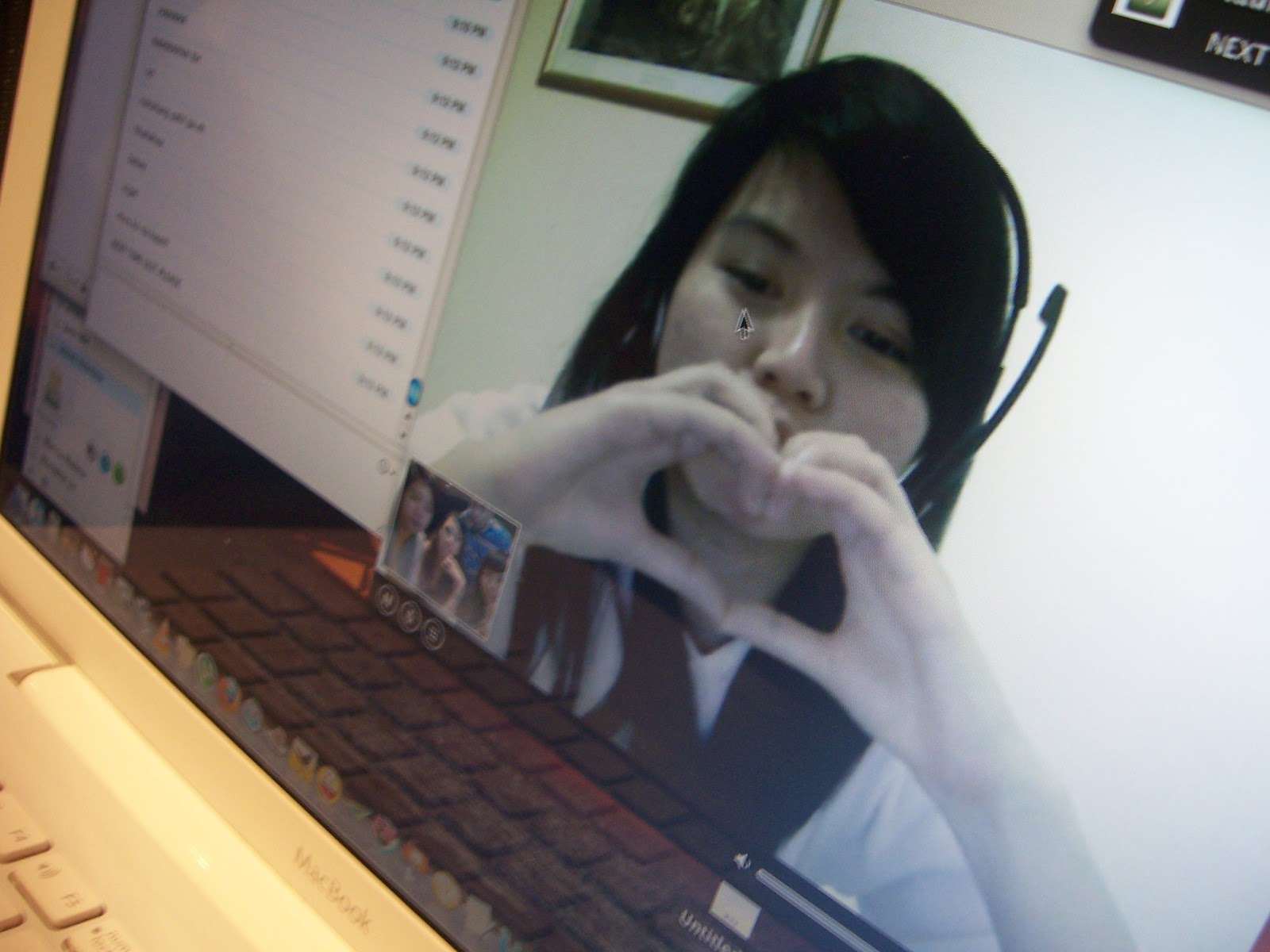 The conversation certainly felt one-sided, never mind that all of us we're probably tired from the hysteria. Lau could hear us perfectly, which meant that every comment we had made its way to Sydney. Yes, even the side comments we made in jest, the very comments that should be whispered, only to be later exposed and laughed about. For some reason the revelations felt a little heavier. The laughter that followed after was, inevitably, heavier too.

I guess we just missed Lau, and she just missed us a lot. It's been a while since she flew to Australia to study - I didn't even know until she was there - and while she's been on Skype with other friends over the months, this was perhaps one of the few times when she saw six people on the other end rather than just one. In this case, it was me, Jackie, Jill, John, Malia and Sara, the only six people who made it to the block reunion. Sure, us two guys might have been extras, but I figure Lau still appreciated the appearance.

Lau was seated comfortably in front of her PC, wearing the jacket Malia gave her, and as expected, a comfortable pair of headphones that made her privy to everything we said. On the other hand, we couldn't hear her, as we were in a fairly noisy coffee shop: she typed in her reactions to those jokes we made, bringing in the big letters when she felt like laughing out loud, never mind that we could see her almost fall down from her chair.

Despite the hitches, it worked. It really worked. Jackie's plans for a reunion were pretty big: she invited everyone she could invite, and we got thirteen commitments before the original date. But we planned this thing months in advance; inevitably people had "prior commitments" and skipped the event without even changing their status. But the six people - four of which meet a lot, for the most part - pretty much made the most of it, and throw in a seventh who's been out of the loop for ages, and you have an actual reunion.

I couldn't help but feel a little resentful last night, though. I guess it's me having latched all hopes on this reunion, in part because I don't really have much social participations in the circles I'm in. I might've forgotten my tendency to feel isolated in anything I do anyway: even block reunions end with me just looking on and listening. But, in Jackie's words, "at least, hindi kami tulad ng mga ka-opisina mo."

However, even she couldn't hide her dismay. She probably didn't feel as much as I did - explain my tweet, then - but among the forty people we sent invites to, half didn't even confirm. Half of those who confirmed didn't end up arriving, although some had pretty valid reasons. Our first conversations when we arrived at the meeting place revolved around a few things: the others' attendance, the others' whereabouts, and whether - and I'm implying this - they even care to let us know.

I can't remember Jackie's exact quote, but her thought went like this: why do some people just leave their pasts behind?

I probably didn't get that right. Point is, they're trying to somehow run away from reconnecting with their pasts, deciding to just focus on where they are and decide they're having more fun with it.

"Baka kasi they think it's too soon," I thought. "Maybe in ten years, they'll respond."

"It could be too late," she answered.

Too late, perhaps, when the inevitable reconnection happens and we realize that there's no reunion to be had, because we're talking to completely different people. The shared memories become hazy. Or maybe I'm just a little too resentful for my own good.

Lau claimed that she is surrounded by "mature" people in Sydney, but she looked like the "birdy" Lau we knew back in college. She still had those crazy gestures, those goofy expressions and that huge grin - perhaps she kept that all in when she's surrounded by her Aussie peers, as Malia suggested, but she didn't seem all that changed either. Just the right balance. And while I'm fighting off a potential asthma attack caused by all the laughing, I'm glad that there's still a reason to catch up with certain people. Unlike others, who say no at every opportunity.

Suddenly, I understand my resentment.
And your responses...