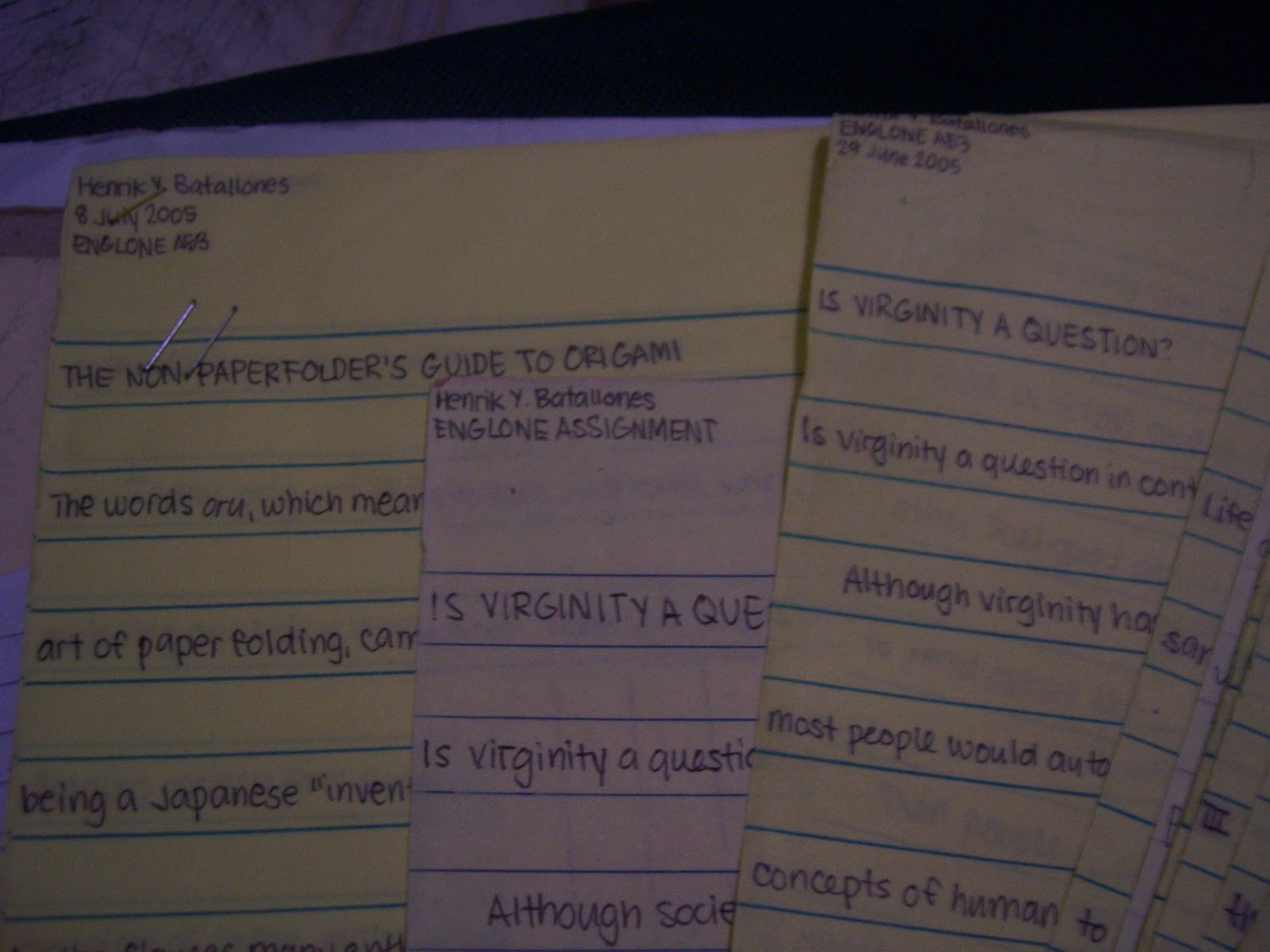 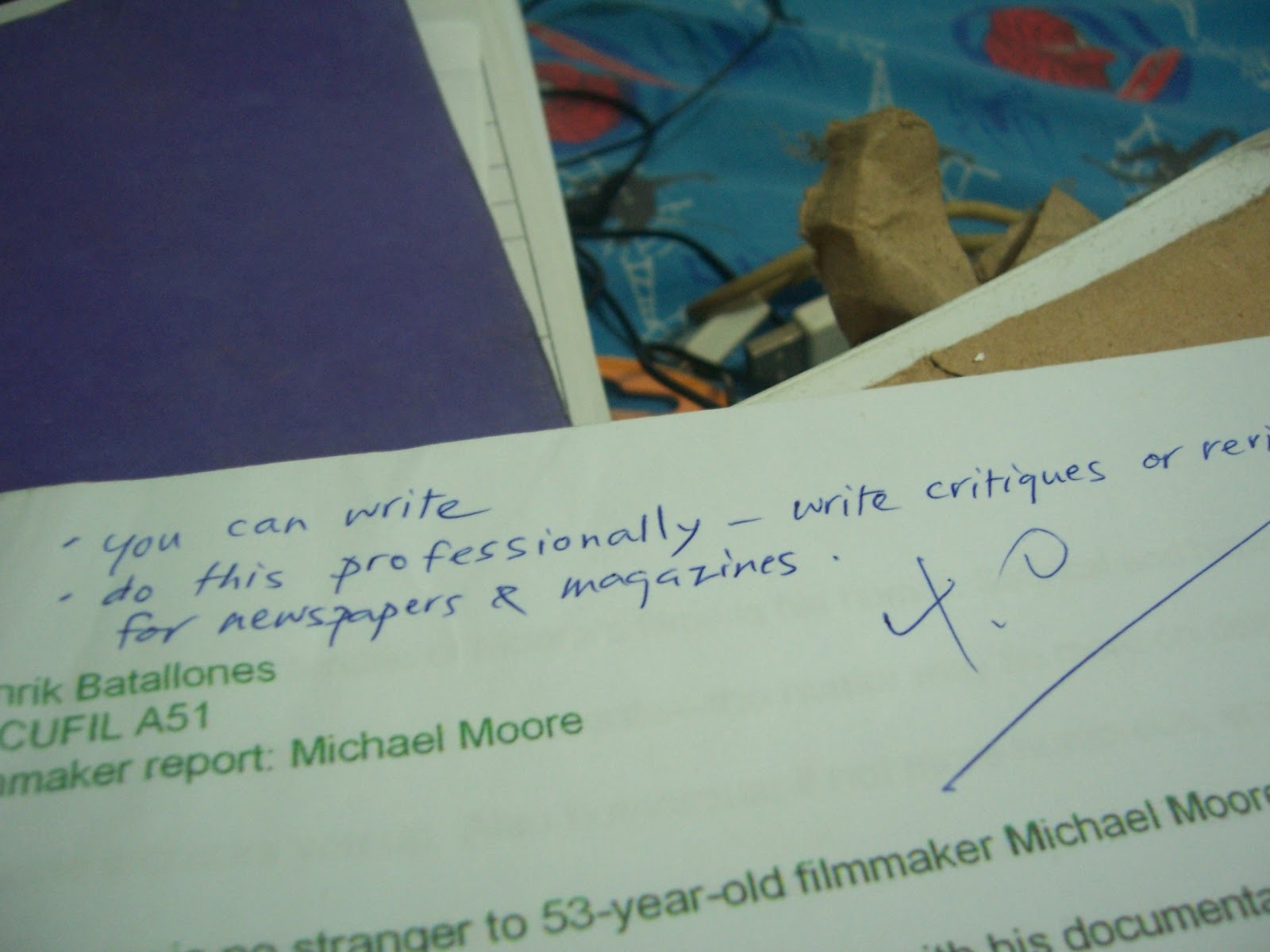 I went to college with an intention to become a writer.

It's funny how I forgot that I ever wrote that. I chanced upon that while preparing for today's installment of the spring cleaning series, one that I somehow designed to be a little poignant, since I'm writing for a living right now. It may not be for one of those prestigious publications in the country, and it may be for a company that outsourced some of its manpower to these islands to save up, but you can reasonably say that I'm still doing some decent writing.

Looking back at what Sir Doy wrote on that report I wrote a couple of years back, I realized that I'm doing the very things he suggested that I do. "Write critiques or reviews for newspapers and magazines." Well, writing for print has proven to be elusive - ask Ariane, and our attempt to try out for Supreme, which ended with some choice words from Tim Yap and the bitter realization that someone I met in college is faring much better - but I'm still writing critiques and reviews. I've complained about Siobhan Magnus' glory notes. I've expressed my amazement at how Glee did its Bohemian Rhapsody sequence in the first season finale. And I've pondered whether the CSI trilogy helped introduce viewers to Ray Langston. My conditions may not be ideal, but I'm somehow making it work.

Of course, things are different now. I'll say something along the lines of, I can't be stuck here. I'll admit, I'm willing to give up the privilege of watching some Glee episodes ahead of pretty much everything in exchange for actually going out there and writing a story - I can't just daydream of interviewing Dianna Agron, after all. But a part of me is wary: going out there is something I haven't really been good at. There are times when I look back at my final project for investigative journalism class, when I wrote an exposition piece on colorum vehicles, trying to figure out why the drivers are not taking the legal route the LTO has for them. I should've gone to the LTO office and asked questions. I should've spent a day with one of these shuttle drivers. Then again, I didn't know better two years ago.

I suddenly remembered my chance encounter with Miss Bacalla more than a year ago. We met at the Shang, and we talked about my work and my plans for the future. She suggested that I pursue a career in the media if money is not an object to me. And, if I decide to do so, I can ask her for a recommendation. I haven't done either. (Yes, Carlo, I still haven't had the time to email your friend.) And I'm afraid the window has closed on me. And I'm growing wary of whether I made the right decision or not.

Photo one: In the beginning, there was English class, and essays on random subjects such as origami and the bonobos. Oh, and as you can see, virginity. I haven't read that essay since, and I can't remember why I decided to write about it.

Photo two: In the middle, there were majors, and all the critiques we had to write. We were being honed to become media people with a constructive-yet-critical eye on things, and I somehow did well until this, my critique of Michael Moore's oeuvre for documentary class. Apparently I did so well Sir Doy thought I "can write". Well, here I am.
And your responses...