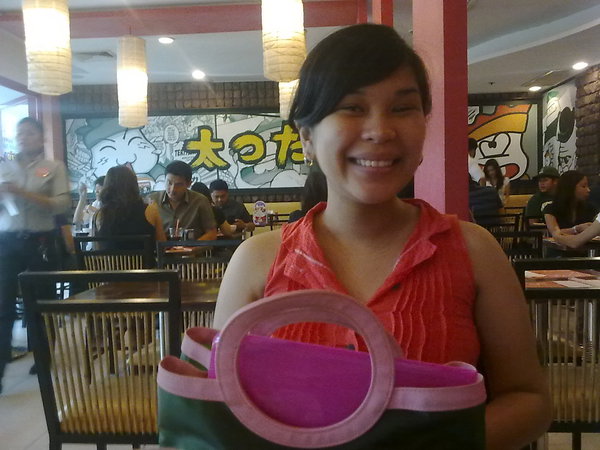 One day, a man and a woman left a supermarket in a bit of a panic. She came from the comfort room - maybe I got it wrong, but this is how I understood the story - where she pulled out a pregnancy test and saw two lines. Positive. She is pregnant.

They walked out of the entrance to have a smoke. She didn't believe she was pregnant, or at least she didn't want to believe yet. She was getting a little jittery. While walking out she thought she heard someone calling her name, but she had other things to think about.

Outside smoking, the man heard the very thing the woman heard. "May tumatawag yata sa'yo," he went, pointing towards the entrance. The woman turned to the door and finally saw the person calling her out.

The voices she heard turns out to be one of her closest friends, who worked for a real estate firm: she was assigned at a booth in the very supermarket she came from. After the usual greetings, she felt she had to tell her some pretty urgent news.

"May sasabihin ako sa'yo," the woman said. "Pero mamaya na. May pupuntahan lang kami." And just as quick, she left with her boyfriend, to head to the hospital, to take that one test she needed.

Somewhere along the way, the friend send a text message to the woman. "Buntis ka?"

A few weeks later, another man and woman went up the escalator in one of the more upscale malls. They were going to watch a movie. Eclipse, in fact. On the way up, the other woman felt she had to tell her friend - it's a friendly movie date, after all - some news.

"Bakit naman ako magugulat?" By this time the two have arrived at the ticket counter, trying to find the line for Eclipse. "Ewan ko. Parang, it's the sort of thing I expected to happen to her. Kasi nga, di ba, she's out and about and all."

"Point," the other man conceded.

A few months later, the other man was having lunch with yet another woman, a college friend of his. (Don't worry. This forced literary style will end a few paragraphs from now. Anyway.) They haven't met since graduation, and they had two years' worth of news to catch up on. By this time, a lot has happened: the woman's parents already found out about her pregnancy, and the other man "officially" knew about it. He figured he'll mention it to his friend.

"Have you heard Ale is pregnant, Icka?" he went.

"Really?" she said. There was a short pause. "Wouldn't it be awkward, though? You had a crush on her."

He didn't know it would get more surreal. A couple of months after, while busy at work, he got a message on his phone. "Galle ako," it said. It was the pregnant woman. "You here?"

"Up to what time ka diyan?" he replied. "I can go, kahit mahabang lakad."

I told you that literary style will end soon. Sorry for the confusion. There really wasn't a point in doing that, not even metaphorically. Sure, when I sat down in front of Ale at Teriyaki Boy, it felt a little surreal, but only because I wasn't really in her circle, judging from the fact that I learned of her pregnancy from Kat, and had to pretend that I only figured it out through her tweets.

Then again, we've talked about it a few times already. She was looking for a new gynecologist, when she was frustrated with her old one, who did not respond to her inquiries about her headaches. At one point she was at Medical City, which was relatively near to my office, and I quipped about being able to see her baby bump. That should explain our meet-up.

Yes, Kat was right: it was a little weird imagining Ale settling down. Or maybe it's because I wasn't used to talking to people about settling down. Yes, she said, a wedding is in the future, but it isn't much of a priority at the moment, since she still has to give birth. She's due in February at the latest - funnily, she's expected to deliver the baby on Valentine's Day - and they're now thinking about where to get their hospital funds. No scrimping, though.

"Di ba nga, we were made in God's likeness and image?" she explained. She was attending this seminar - and no, we haven't gone religious on you. Anyway. "Saka di ba nga, God is almighty? So ibig sabihin nun, we're also almighty." Her point was, she doesn't need to worry about things too much, because it will come. I'll admit, her reasoning makes sense - but for a cynic like me, her positivity was disconcerting. That, or I really can't get used to seeing her settling down.

But she is. Before the we-are-almighty-too discussion - that was when we both left the mall - we were talking about baby names. She doesn't like the name her boyfriend, Bryan, has. "Masyadong girly ang Lorraine," she said. I'd agree, but her pick for a name - Alexandra - is much, much girlier.

I haven't met her boyfriend, of course, but he struck me as this really mature guy, perhaps someone Ale really deserves. She'd tell me about the many discussions they had after the pregnancy was revealed: how both grandparents reacted, how the parents coped with it, how the mother dealt with it. I was, oddly, fascinated. Sure, there's the fact that I never expected to be learning about this. But there's also the impression that Ale isn't the least bit worried. Maybe it's the new philosophy. It just struck me that she knows what to do after.

I was getting the idea that this will last. I told her that it will last, that - and there's this series of cosmic circumstances that explains why she got pregnant now - Bryan is meant for her, and that she'll be happy. Maybe I didn't say that, but the point is, the positivity was rubbing off. Or I found myself excited for the baby as much as anybody else.

She doesn't look as pregnant as you'd expect someone seven months into the pregnancy to be. Maybe that's why I forgot to - and yes, I kinda planned this - whisper a hello to her daughter, which she nicknamed "Jellybean" for now.

I somehow hoped she'd take my advice. Then I snapped out of it. That, I figured, is the most surreal it could get.
And your responses...