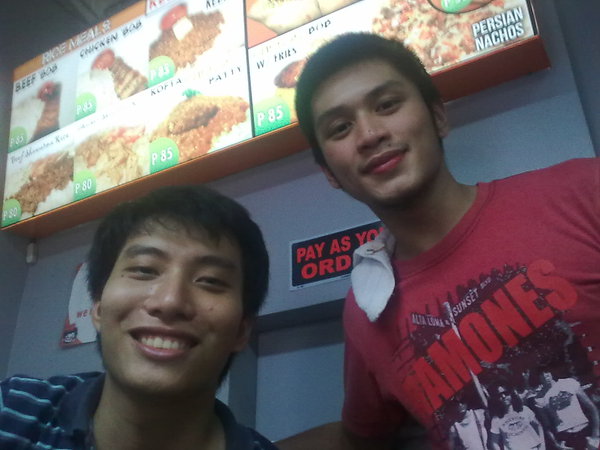 I know my lunch habits are different. The rest of the world take off at midday, and I take off an hour after, just so I can avoid the lunch rush - that time when the rest of the world descends on every available food-related establishment and eat. I've been doing that for the good part of two years, and my body has adjusted accordingly: I rarely get hungry earlier than one in the afternoon.

The thing is, I can accommodate. I've had early lunches with certain people, from agreeable friends to just-getting-by colleagues. Of course, they have to tell me that these things will happen. My usual excuse: I can take off any time because nobody's really watching.

Today, however, nobody really told me anything. I just knew Carlo was out and about, at the newly-opened branch of Kebab Bob at Strata 2000. I had an inkling that Michelle, who worked at Ortigas, would drop by. Sure, I presumed that she wouldn't drop by today because her job meant she's probably busy even during her lunch break.

Something different happened, though. Michelle had a lunch break, and was waiting at the restaurant for me. Well, it was more of Carlo asking her to wait for me. She couldn't wait any longer - she had a meeting at one in the afternoon. I left the office fifteen minutes earlier. Carlo told me she left five minutes before.

Nobody told me any of this was happening.

Okay. The only thing I knew was this: Carlo was out and about, at the newly-opened branch of Kebab Bob. That happens to be his business venture, a partnership with his blockmate Edong. It's their second branch, I think - I'm not really sure if their first branch, at some obscure mall in Caloocan, was still going strong or has already closed down. He tweeted that he'll be walking the streets of Ortigas, encouraging people to check his little place out. I figured I would go since, well, I am in Ortigas, and a fifteen minute walk to Strata 2000 isn't a bad thing for someone who needs exercise.

The first person I saw, however, was Edong, just outside the store, smoking a cigarette.

What happened was, of course, some catching up. I haven't seen them for the best part of two years. (I spotted Carlo during that school excursion.) There were the usual questions about what we're all doing since graduation. I didn't really have to ask, since I was already living their answer.

Kebab Bob, Edong explained to me, took off from their other business venture, a Persian resto-bar called Keema Keema. I've heard of that - it's everywhere on Facebook - but it was at the Pioneer area, that place in between my workplace and Makati that still seems so hard to get to. Sure, it was a relative hit, but somewhere along the way he and Carlo decided that they should go the fast food route. I figured it'd appeal more to the workforce who are out on a lunch break, predictably at midday.

The food's been tweaked for the workforce, obviously. I tried their specialty - well, that's what one of their employees said. (Yes, their employees. Kinda surreal, huh?) It's pretty much a beef kebab, with a whole grilled tomato, some buttered rice, and the usual sauce, which is sweeter that I would've wanted. But the beef was well-seasoned, and since I was looking to spend as less money as possible this week, it was pretty much worth it.

Imagine me telling that to Edong. There I was, a friend of his, suddenly shifting to food critic mode, trying as much as possible to be objective - I mean, I cannot kiss ass to save my life. It all went down fine.

The other surreal feeling occurred minutes before I left. I suddenly knew someone in the food industry. You get the idea - I'd drop by my friend's restaurant and have a chat with the owners. Maybe hope for a freebie, although I wouldn't really dare ask for one. I didn't want one either, although I did get Carlo to serve me some iced tea, in a cup made of corn and yam, placed on a tray with all the straws. It's a usually Carlo thing to do. He'll (unintentionally) sound a little patronizing but you know he's pretty sincere. As he said, it's like Student Council elections.

I told them I'll return. One, it's cheap. Two, I sometimes need to walk a long distance, just for the exercise. Three, the food's pretty good. And four, I know the owners, so I can tell them when something's a little bit off. The tables were too high, I told them. The chairs are just too low, he countered. I think they won't think I'm being snobbish and all. I'll (unintentionally) sound snarky but they should know I'm pretty sincere. It's just like Shale Campaigns, really.

We'd end up talking about our jobs again. You all know where this went.

Kebab Bob is at the ground floor of the Strata 2000. It's not at the F. Ortigas Jr. side; it's at the Garnet side, opposite Yellow Cab and Army/Navy, although I didn't really see those two when I went there. I'm just trusting Carlo's description.
And your responses...

Hi, by just reading what you have written (esp with how you wrote it), readers like me might get the idea that Carlo and Edong are together as partners (beyond friends and business mates). You might consider editing if you don't want them to be construed as such. :-)