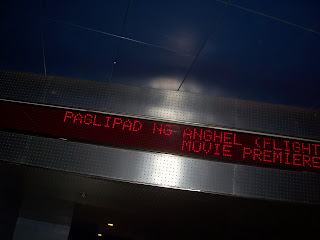 But there I was, talking to her, in front of a cinema, catching up. I would've asked her about how she is, but I knew the conversation would be all about me. I was the graduate - the Latin honors meant the chances of her remembering me was a bit higher - and she'd be inevitably curious about what I do for a living now.

"So where do you work?" she asked me.

"At home," I said, stopping myself from elaborating. "I'm a writer for an America-based entertainment website..."

"That's good!" she said. I could tell she was genuinely happy for me. "At least it's still close to [communication] arts."

There I was, perhaps the most insecure person in that graduating batch, getting some affirmation from the chair of the Communication Department. But she had a point, though. At least I still write for a living. I still communicate to an audience, albeit one made up of snarky American Idol fanatics. Some of us work for banks. The way she sees it, I'm better off, as opposed to my own opinion of myself.

"The downside is," I said, "I'm stuck at home. I do the same things every single day. It's a routine worse than school."

"Kaya nga I took this opportunity to go out," I said. "I was thinking of wearing my Doy shirt--"

"No, no, no," she said. I was joking. I presumed she knew that. We were both laughing, and then she asked me whether I saw Miss Sibayan. Now she was also never my professor, which makes me question my credentials as a communication arts graduate of DLSU.

We were attending the premiere night of Sir Doy's second independent film, Paglipad ng Anghel. I first heard of it when I was still a student. I think it was during his retirement party (the same reason why I have the Doy shirts) when a montage of his best works was screened. He wrote many screenplays in the 70s and 80s; he made his directorial debut with Pepot Artista, only in 2005. Paglipad ng Anghel was represented by a little clip of a man rushing to a church altar, with angel's wings shooting off his back, and obviously struggling.

It was a screenplay he hasn't had a chance of filming until now, when DLSU agreed to produce the film and give him free rein. He began writing it in 1997, inspired by a story he heard from a friend of his - you must've read about it in the newspapers in the past few weeks. More than a decade later, it's a completed project, and I was attending the premiere night.

I almost didn't make it, actually. I first got wind of the event from Jackie, who posted a newspaper article on Facebook. It's finally coming out, I thought. I knew they were producing the film as far as two years ago - when Kat and I watched Eclipse together we were talking about that (and Ale's pregnancy). I was wondering what happened to it; last I heard it was set for an August release, but I'm not sure what happened in between.

Kat, of course, worked on the film. Inevitably the production would involve Lasallians in every aspect: apart from the fact that it topbills Sid Lucero (from CSB) and LJ Moreno (from the CED graduate program) most of the people behind the scenes were alumni. Kat, I think, was the production manager. Misha did art direction. Piyar, Neil, Maui, Malia - I didn't have to convince myself that I would watch. It's, more or less, a CAM105 production!

Catch was, tickets were only available on campus, and since I couldn't just go there, I scrambled to have someone buy them for me. Ale's brother is a DLSU student, so she offered to have him buy me tickets. But nothing came out of it, so I almost gave up any chance of watching the film - until Carmel called me the following day, saying she got me a complimentary ticket. I should've told her I owe her one.

Yes, a complimentary ticket. As if it's not enough to feel bad about not having to pay anything - all proceeds from the film will go to the One La Salle fund - it felt weird having to fall in line first. I was at the balcony. A few rows away from me were luminaries: Joey Reyes, Manny Castañeda, Mike Enriquez, Ricky Davao, Anita Linda, Norman Loteria. Then again, I should have prepared myself for it. It's the premiere. Some names will surface. And then, you've been to many premieres in your life. Nothing new.

There's one way to deal with these things: stick to the people that you know. Me, I've never really attempt to mingle with celebrities, unless circumstance tells me to. All I wanted was to catch up with some classmates and drop a word with Sir Doy. I was his student, after all. What I know about writing screenplays, I owe to him.

The thing with film premieres is, you see a lot of people around you, and not most of them are invited to the affair. Celebrity spotters. When the film ended there were a lot of people in front of the cinema entrance, perhaps waiting for a glimpse of Sid Lucero, member of the Eigenmann acting clan. That's for who I call "mere civilians". The Lasallian alumni - the Communication Department alumni - gathered around Mang Norms instead, asking to take photos of him.

He only had a bit role - he was an albularyo who scampered away after seeing an apparition from Joel Torre (si Andres, lumilipad!) convincing Sid's character, Gabby, to heal his sick cousin Dinay. Of course, us folks who know him as the grumpy guy operating the editing bay (or the equipment room, depending on the time frame) found it cool. "Si Mang Norms, artista na!" we'd exclaim. His name appeared in the credits and there was a louder-than-usual applause from the audience.

"Nakatulong ang pagiging kalbo ko," he quipped before the screening.

Sir Doy, on the other hand, was overwhelmed by well wishers. He hasn't really changed. He spoke to the audience before the screening, and he sounded like the teacher who gave away whatever he found in his house during film writing class - his last term as a full-time DLSU professor. He was insightful yet jolly. "Ang ilan sa inyo, nakikita ko, kumakain ng popcorn," he said. "Now, kung klase ko 'to, pagbabawalan ko kayo, but go ahead."

I managed to shake his hand a full thirty minutes after the film ended. I wanted to talk to him, but no words were exchanged. I wasn't sure if he recognized me. I'd like to think there were just a lot of well-wishers.

The rest of my post-premiere time, I spent standing around. Yes, I had classmates, but since they're part of the crew I expected them to run things their own way. Kat and Ale were there, and so was (Cinemalaya filmmaker - yes, really) Misha, and Piyar, and on-set "lovebirds" Neil and Maui. Of course, I was the outsider, standing around, laughing along - the difference was, I was a bit explicit with the fact that I was just, well, standing around.

They were actually waiting for Sid to come out of the theater. The younger members of the crew wanted a photo with him, and they waited quite a while, since the celebrity spotters just swarmed around him, with photo requests and signature requests and whatnot. He was almost on his way out when Maui managed to negotiate a photo op with his group. Sid quickly went bonkers, for lack of a better term.

He then proceeded to give the girls a smooch. And then he attempted to lick Neil's cheek. Inevitably, I ended up taking the photograph, further exasperating my mother, who was dismayed I didn't have a photo of myself from that night. Well, she doesn't know I was in another photograph, with the crew, and actress (and batchmate - we apparently share a lot of common friends) Steph Henares. ("Kasama ba ako?" I asked. "Oo!" she said, before setting up the shot.) Also, the fact that I was just supposed to stand around, like all the journalists and the fans and the well-wishers, waiting for a chance to say hi.
And your responses...

I just want a centennial shirt, Niko. Hahaha. Kidding. :) But the ticket is no biggie coz my boss gives them away profusely. I would've had one more, I think.