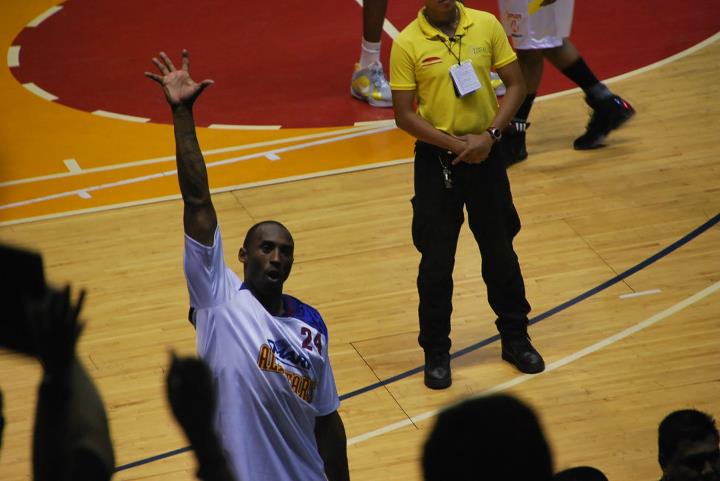 I never watched a lot of live basketball. Sure, I watch some on TV when I feel like it, but I've only watched a basketball game in the face twice in my life. The first was when I was nine or ten years old, I think, when my dad brought me and my sister to an MBA game, where the Laguna Lakers lost to the Socsargen Marlins. The second was last night.

Similarly, I've never been to the Araneta Coliseum often. Yes, I was a DLSU student who's never watched a Green Archers game live. I've only been there twice. The first was during the Vertical Horizon concert. The second was last night.

In case you still didn't get it, I don't follow basketball much. Which perhaps makes me what Krizzie describes as a poser. But when I was asked if I wanted tickets - the event dovetailed nicely with my brother's birthday - I figured, why not? It makes for a change.

I think the name "Araneta Coliseum" slides down the tongue well. I also think Manny Pangilinan loves to promote himself. Yes, he organized the event. Yes, he managed to rename the Araneta Coliseum as the Smart Araneta Coliseum. (Sorry, Globe; no events for you.) But the first leg of the Ultimate All-Star Weekend - where nine NBA players, including Kobe Bryant, Kevin Durant and Derrick Rose faced off against the PBA's finest - can be summed up in one sentence: Manny Pangilinan is god. The only thing he has to do is go to politics. To his credit, though, the capacity crowd were applauding him sincerely.

At least 15,000 people hate Mo Twister. That's judging from how loud the boos were when he came out to host the warm-up.

At least 15,000 people have forgiven Joseph Estrada. He was seated at courtside, and when the cameras focused on him, the crowd chanted, "Erap! Erap! Erap!" He gave everyone a wave. I wondered if he's our version of Jack Nicholson.

I was probably the only one who wanted the local players to win. Sure, I get the awesomeness of having nine NBA players - and not fading ones at that - go to the Philippines to play ball, but I just wanted to see the PBA players whoop their asses, for one. Everybody else was loudly booing the PBA players when they first came out to the court, leading James Yap to quip, "idol natin silang lahat, so sana mag-cheer din kayo sa amin."

Everybody was starstruck. Seeing Rabeh al-Hussaini come out to the court with a sketchpad was understandably adorable, especially when he started asking the NBA players for an autograph. The organizers were actually stopping him from doing so. Later, we saw the referees take photos with the players, too.

It was a no-contest. The NBA players (I refuse to call them the Smart All-Stars, since Manny Pangilinan is not my god) won easily, 131-105. But in the beginning it looked like it would be close... but then again, that was Arwind Santos' doing. He scored the first six points for the locals, leading me to quip that it's the NBA versus Arwind Santos. Which looks nice in a headline. What doesn't look nice is when you factor in the guy who brought this really loud horn and decided to distract any PBA player who's on the free throw line.

Unexpectedly, I ended up being this close to a childhood crush. I don't know if anybody remembers Patricia Ann Roque from ABS-CBN's ATBP. Now she's a TV5 reporter who found my dad wearing a Lakers jersey, who ended up interviewing his colleague who watched with us. I was seated beside him. I expect some ribbing from my cousin.

Krizzie is right. I am a poser. Or not. But I felt a bit out of the water last night. It was a good game, and we managed to smuggle our DSLR - a mean feat considering how Karla fared with her point-and-click that only looks like a DSLR the last time we were there. And while I don't still understand why the Philippines loves basketball that much, well, I guess that is the point.
And your responses...