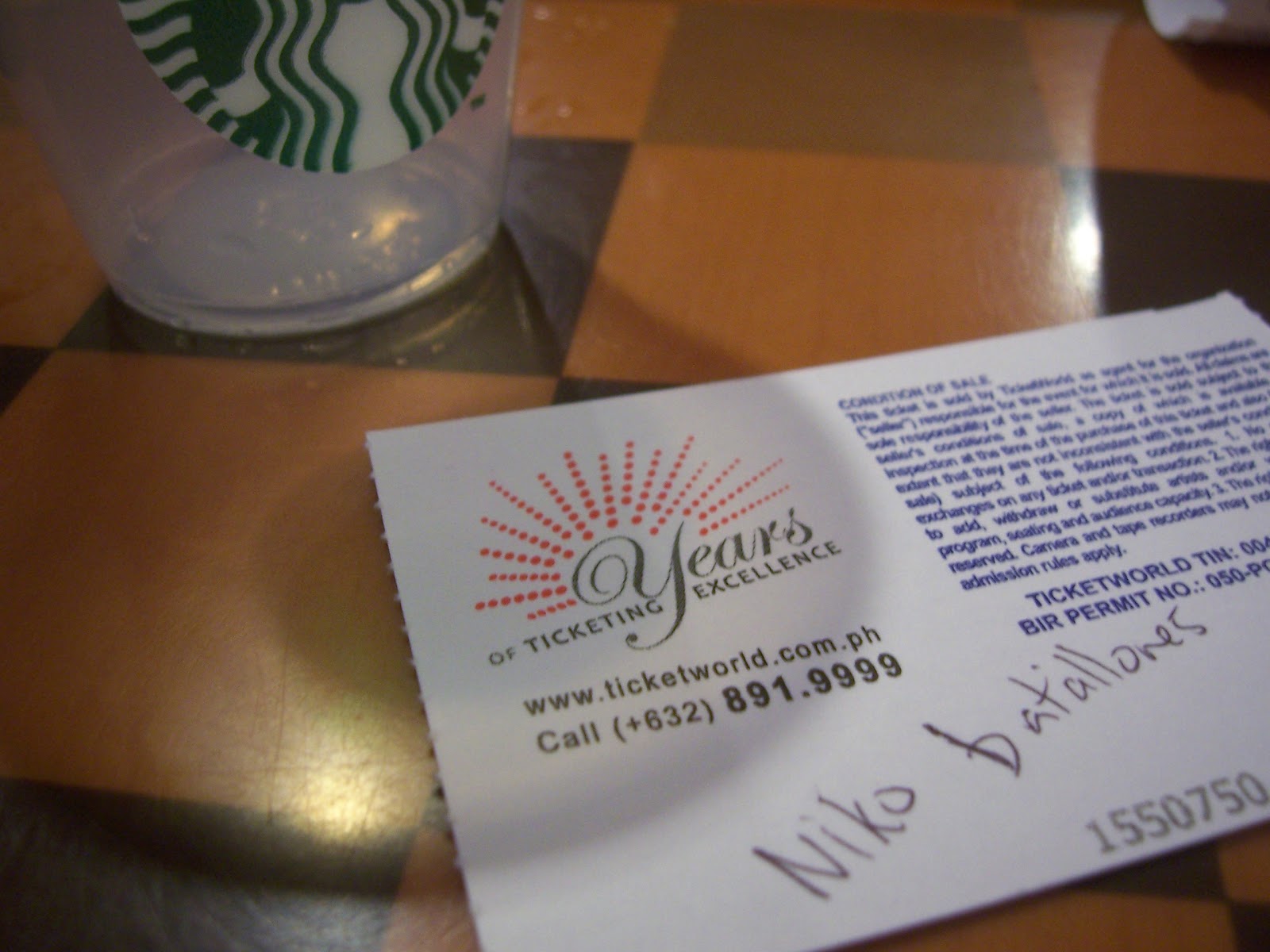 I was worried that I'd be the first one to get to the CCP. That'd mean I'll be the one getting tickets for the whole group, which was already down one: Y2K had to pull out at the very last minute because she had to stay at the office. That'd also mean I'll have to contact Misha, who got all of us free tickets - my concern was, I thought she changed her phone number and, when the time comes that I have to ask her for tickets, I'd be calling nobody.

"Sucks," Y2K said. "I'll watch on Sunday na lang." It was followed by what apparently was Misha's phone number, which I apparently still had.

I did get to the CCP first. I wasn't that surprised, since I came from home, while everybody else came from wherever they're working. I found myself a bit overwhelmed by the crowd that came to watch the films featured in this year's Cinemalaya. The last time I attended was three years ago; I was surrounded by familiar faces from DLSU, as well as actors, filmmakers, or whoever was in between them. This time, well, nothing's changed, but it all felt alien to me, perhaps because I was no longer a student who was required to watch these films; I'm not a civilian showing support for a friend.

I didn't have to call Misha. She found me.

"How are you?" she said, after a quick hello hug.

"Tickets are available at the counter," she said, pointing at the box office.

I wasn't exactly clear what she meant, so I sent a text message to Mae, Arlene and Kimmy - three people whose numbers I was sure I still had. I spent the next thirty minutes taking the scenery in. Filmmakers talking to filmmakers, students talking to students, and me, looking out the front entrance of the main theater, holding the barely-noticeable scar in my left elbow in the process. And then I'd hear some of the ushers talk about the tickets Misha reserved.

Yep, that's pull. I was, after all, watching her short film. Oliver's Apartment - about a male Emma Pillsbury whose gets something in the mail - is competing this year. When I first heard the news, a few months ago from Mae, I instantly remembered one of the few online conversations we had, one during my last term in DLSU, when she was this close to dropping her business courses and pursuing films instead. (I remember it because I wrote about it.) Since then, she apparently took up filmmaking in New York, a fact made obvious by the Big Apple-ness of her short, if not the fact that her actors are American. Or the end title that said "NYU Intensive Filmmaking".

Music started playing in the lobby. I still remember what it means: time to take your seats. I got my ticket - individually labeled and properly spelled, although she calls me Henrik and she wrote Niko instead - and decided to take my seat. I did not get a reply from anyone.

"Hi," she said from the stage. "I'm Misha Balangue, director of Oliver's Apartment."

I realized why she had to wear a lot of make-up. Theater lights.

"My cast couldn't be here tonight... I hope you enjoy watching this film as much as we enjoyed making it. Thank you!"

The shorts package - which includes a dystopian slow-burn and a black-and-white flicker - was over in an hour, a full hour earlier than I expected. It took me ten minutes to see a familiar face - Jed's - and it took me five more minutes to track him down from the crowds.

"Did you see anybody else?" I asked him when I finally did.

"You saw Misha?" he answered. "She had to leave early. Dinner daw."

"Yeah, I only saw her, and nobody else."

Turns out only the two of us made it.

"No!" Y2K replied. "Kimmy and Iel left the office long ago!"

"We didn't see them! And they didn't reply."

"Oh no. They could be stuck in traffic. Lakas ng ulan, eh."

"Aids replied. They're just parking now. Yikes. I'll tell them you got the tix."

It was a communication breakdown of sorts. The mobile phone jammers at the CCP are so good, you can't get a decent signal even after you've left the theater. For thirty minutes, apparently, they were trying to call me. All that time, I was outside the side entrance, crossing the road and going back, trying to call Mae to no avail, apparently because I was calling the wrong number. So much for assurances.

I ended up crashing dinner for six - Aids, Arlene, Ian, Kimmy, Mae and Marielle. They ended up, by accident, paying for my dinner. I ended up paying (I think) for the bouquet of roses they were supposed to give Misha, a plan that would've worked if not for the fact that they only caught the tail-end of Hazard. Then again, Arlene had a pen, Mae had a notepad, and Aids had Misha's home address; the seven of us ended up writing congratulatory notes, and Mae, being the advertising art director, did the drawing.

"We're very proud of her," Arlene said. "After thinking so long of dropping her [commerce] course..."

All throughout, I was feeling proud myself, that I was able to pick up on almost everything they were talking about, when in theory I am terribly out of place. I didn't really have to worry, because we were all proud of a friend's achievement. Except for the fact that I got there on time to watch it.

I decided to hitch a ride with Arlene, since I wanted to spend as less money as possible on a cab which would bring me to my dad's cocktails at the Makati Shangri-La. Mae and Marielle, who was going down somewhere in Makati's fringes, were with us. We were stuck in traffic along Vito Cruz, when Arlene had Mae read a text message she got from a colleague of hers. Seven basic truths, or something.

Impossible. The three of us at the back of the car tried, and work.

Arlene was having a fit of laughter. A pretty serious one. Marielle and Mae realized they were duped. Me? Of course - more so, since I was trying hard to sound smart, I ended up doing it first. A minute later, we headed out to deliver the package, we talked about how expensive going on the Skyway every day is, and I thought a bit about whether to feel too close or too distant. I couldn't decide.
And your responses...

I'm supposed to see Shorts B today at the UPFI. Not worth it daw sabi ng friends. Plus nagsu-sulk pa 'ko. Hahahaha!