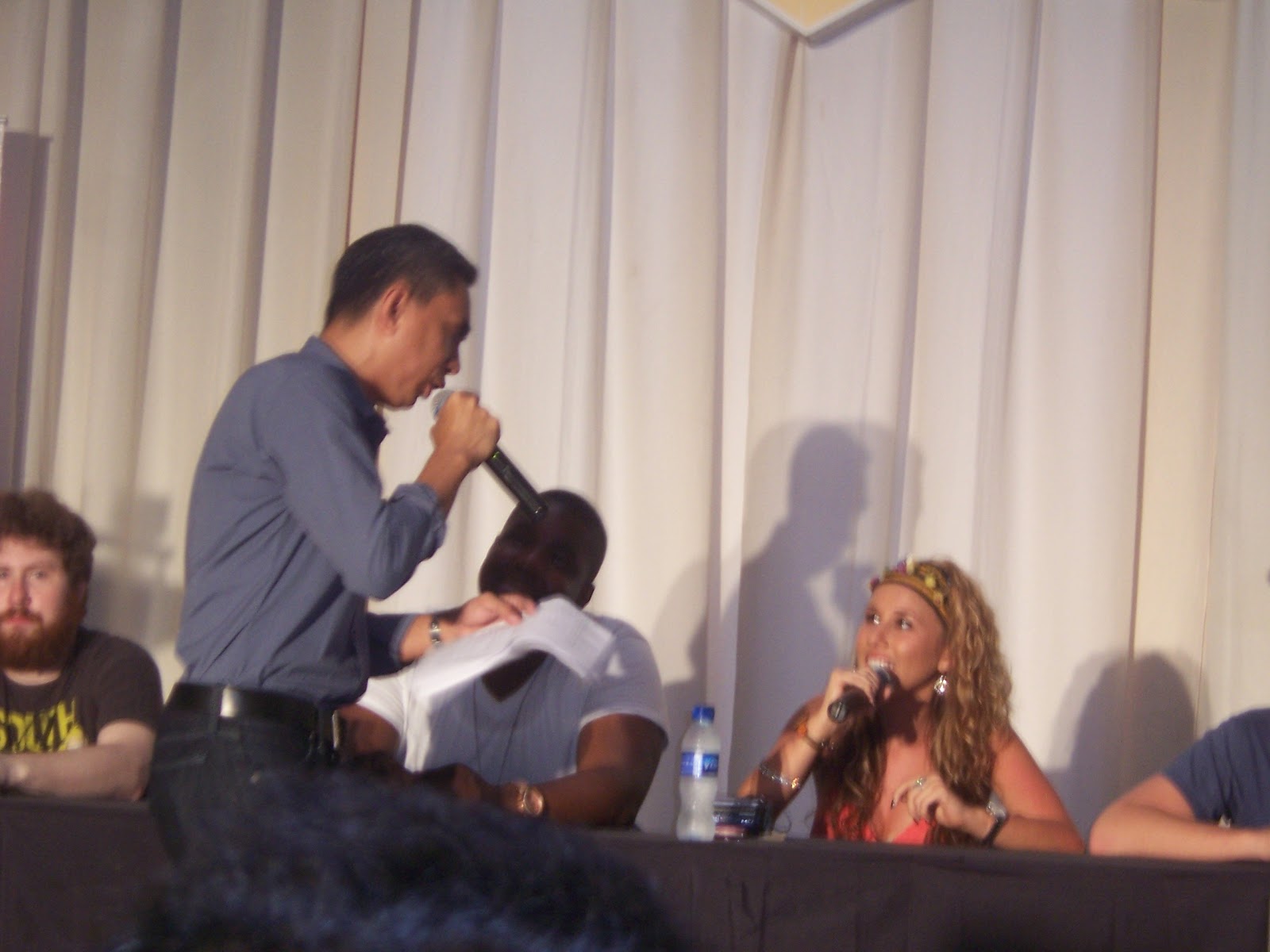 You see, in an attempt to capitalize (I think) on the fact that this is the first time the American Idol summer tour left North America - this is their only gig outside the continent - the ticket prices are high. Really high. I've been spoiled by my Vertical Horizon experience so I wouldn't settle for anything that doesn't provide a good view of the action. Also, it's Haley Reinhart. It's Haley freaking Reinhart. The girl who had the chops but didn't quite do well in the beginning, until this and this and this and this happened, and until we all hoped that she'd break what was looking like an all-country finale, which happened anyway.

But, I thought, I don't want to spend most of my monthly salary on watching Haley do a few songs, and having to sit through acts I never cared about. (Read: big toddler.) So, as the television ads started making all the Solar channels unwatchable, I told myself that I'm not watching the concert. Maybe if Haley gets a record deal (she did) and releases an album (she hopefully will) and returns to the Philippines (she must) then I'll go.

That was a couple of months ago. Throughout that time I was rationalizing my decision by asking, "how many people will watch the concert exactly?" I've covered Idol for three years and I don't think the last two seasons had a really big following - gone are the days when David vs David mattered. And then the producers added a second date, and I found myself really bewildered. But it never changed my decision.

Turns out I didn't have to. I was catching up with work last Friday when I saw a tweet from Jean, talking about an "ATC gig" involving Haley, along with three other finalists: Casey Abrams, Jacob Lusk and winner Scotty McCreery.

More of a meet and greet really, but still, it's something you do not dare miss. It costs way less than a ticket to a concert with people you don't like. And it's right in my backyard! And I might have a photo with Haley! Dexter will be so proud.

Knowing ATC, the photograph won't happen. The host at the actual event was quite apologetic about it. "Bad news," he described it. But whatever. The photograph with Allison Iraheta wasn't completely expected either (but heavily hoped for). The least I could do is say hello, and be able to proudly say that I met Haley freaking Reinhart.

The only other person to see my frantic replies was Kimmy, who badly wanted to go, if not for the fact that it's happening in Alabang - and, if you're in the north, Alabang is a province. She's also a big Haley fan (and a Casey fan to boot) so, I figured, there's no reason to miss it. She tried, she really tried, but she ultimately didn't go. Madel also wanted to go but also said it's too far. (She should've heard of the fan who came from Quezon City. And that one who came from Bulacan.) Mika, another one of my David Cook contacts, had to study. And Mooie? She thought I was meeting Hayley Williams, and was this close to coming with me. To be fair, I told her about it because we talked about those expensive tickets before.

I ended up going with Jean, who went with her friend Ruby, who went with her mom, or so I believe. The upside to this is, I didn't have to stand near the stage to wait for a line to form, since we ended up staying in the jewelry shop Ruby's in. The downside is, we didn't see the line form. The upside is, we were ahead in line - and I had stub number 62. And I was in the mall thirty minutes after it opened. People actually waited.

I guess I shouldn't have doubted the number of people who had an interest in Idol's tenth season. I honestly thought - and objectively, I must also add - that most Filipinos would go for Haley, whose musical sensibilities were really through the roof. Well, most of my friends were for Haley. Also, I never thought country would have a following here. But there were a lot of people later in the afternoon, mostly kids my age, but a significant bunch of them were mothers. They weren't just there to accompany their kids: they wanted to meet Scotty. Yes, Scotty, the nice kid. My Idol cohort this season, Carla, did once write that Scotty is like the son she wanted to have. She was on to something all this time.

Ruby was for Scotty too. She found him cute. Jean wasn't sure about which CD to buy: she ended up buying both Scotty and Haley's EPs. And pretty much most of the girls were for Scotty, too, judging from the loud screams that came in when he finally made it to the stage, a good thirty minutes behind schedule. Turns out I am terribly outnumbered. Not that I mind. I did say he wouldn't last long, but I prefer him over the attention whore.

I did wait a good six hours before the finalists hit the stage. I had to sit through - no, stand through, because there were no seats - a performance from one of those artists who can only sing acoustic versions of pop songs, and a (pretty good) host who both tried to get the audience going while reminding us that, no, we can't take photographs with our favorites. I can't have a photograph with Haley. Not happening. No.

In between, I was texting Kimmy, who seemed like she's regretting her decision not to come down south. "Say hi to Haley and Casey for me!" she said, and we ended up hatching a plan: she'd text me her message to the growlers, and I'd show it to them. It was a loophole in the rules that I was willing to exploit. I guess I was extra willing to make it work, since the AV guy was just playing Haley's CD on the big speakers. Bennie and the Jets for everyone to hear. A pretty surreal feeling, if you ask me.

I wasn't the only one feeling that way. The finalists were pretty overwhelmed too. They came out all holding cameras, taking photos or videos of the frantic crowds. Me, I was just failing with my photographs (as usual) while wondering why Jacob was wearing a sando of sorts. Casey had a scruffy beard. Scotty was, well, Scotty. And Haley? She was wearing short shorts. Flaunt what you have, I figured. She was on to something all this time.

Interestingly, Jacob was the guy who got everyone going: he was really soaking in the crowd, very vocal in greeting us. Casey was more subdued that Smells Like Teen Spirit suggested. The other two were, well, cute. Haley had the biggest smile, while Scotty looked really grateful for the experience. (I couldn't say much about him, really, because whenever he speaks, the girls go wild.) Both of them tried to speak some Filipino, as you'd expect, but Haley got "mahal kita" spot-on. She really should go back.

Yes, all this time, I was quite calm. I remember seeing Allison, and feeling quite nervous about it. This time, it's like I've been through it all - clearly not the case - and this is just one of those things. Or I got used to the idea that I cannot have a photo with Haley, and that I also blew my one shot at asking her a question, by addressing it to everyone.

"What's the best thing that happened to you in the US tour that you want to see here in the Philippines?"

"Seeing everyone enjoy every kind of music," Casey answered.

I should've asked Haley about almost filling in for Lauren during the finale. So much for press privileges.

I had it all planned out, really. I'll say hello to everyone, maybe shake a few hands, and have Haley sign my CD, while they all sign the poster that I got for free. I think I kinda planned to tell Haley that I've written about her, in the hopes that I'll be recognized somehow. Nah, I actually wanted to tell her that she's lovely. That exact adjective. I was hoping that Kimmy would have sent me her message by then, but when she asked me if she can still send one, I was already in line, and the foreign entourage decided to have things their way. They wanted it all to end soon, and ended up ruining it all.

"How are you doing?" he asked.

Then he signs the poster with his name. I move to the next seat, and Haley, who gets the poster. Moment of truth. I prepared her CD's inlay for her to sign.

"Only one," the foreign girl behind her insisted. "Only one."

Haley looked at her and realized she can't do anything.

"I'm sorry," she told me, in that delicious (that's objective) voice of hers, as she signed the poster. "But thanks for buying the CD!"

She then passes the poster to Jacob, while saying something that suggests that she's overwhelmed. Jacob just signs the thing. I never even got to say hello to him.

He then passes the poster to Casey, who was more accommodating.

He draws his face on the poster. Emphasis on the scruffy beard. I thanked him and left the stage, and the cordoned-off area... and that was it.

Things like this always tend to be five hours of hype and five minutes of disappointment. I really wanted Haley's CD signed. That's what I came for! And then some snobbish woman who probably was never a fan of anybody during her high school years decided to take it all away from me. I say "me" because Jean and Ruby had better luck, since they had Scotty CDs: he signed those. Ruby even got a hug from the guy - and rubbed cheeks, however you translate "beso-beso" - before the bouncers came tumbling in. And they didn't even do a good job, because Jean got to hug Casey. And I didn't even get to shake their hands.

But whatever. I still got to meet Haley freaking Reinhart, and that's all I wanted to do. She is, as I expected from those performances and those behind-the-scenes videos and her interview with Michael Slezak, lovely.

Still. Damn. No photographs.
And your responses...

NOW IM REALLY JEALOUS! I don't think you'd have time to whip out your cellphone to show my text anyway. Why are the people there such in a hurry!? It's not like they have some place better to go... I mean, this is what they're supposed to do here you know, so just let them sign every freaking thing they need to sign! Okay, highblood aside, I'm so happy for you! You got to meet Haley freaking Reinhart! She should really come back, then I'll watch THAT concert.