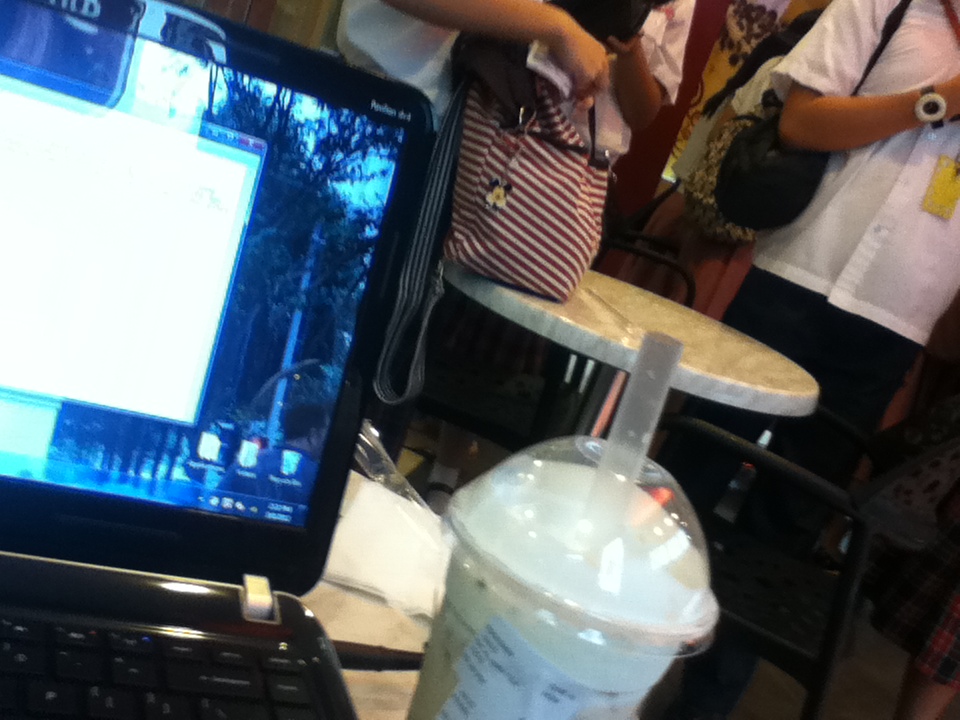 I'm writing this blog entry from the newly-opened Gong Cha branch at ATC.

I've always been a skeptic. Why pay this much for something you can buy for thirty bucks at Chowking? And why the long lines? Frankly, I would've tried earlier if not for the long lines. They always snake around the cinema area. By the way, that's another milk tea stall, Serenitea, which my cousin seems to love, judging from the night she went home to our place - she was sleeping over - with this ridiculously big, empty plastic cup.

So what's the deal? I remember asking.

Not much, she answered.

Why the fuss, then?

My friends definitely have preferences. You know people nowadays. They take photos of their favorite items from this and that. Or, at least, their recent purchase of whatever's gaining buzz nowadays. It was frozen yogurt two years ago, it was milk tea five minutes ago, and it's probably Magnum ice cream (nothing special - I've tried) at the moment. Anyway, I'd see friends craving for this particular drink at this particular store. "My day's complete," they'd exclaim after satisfying their cravings, if you'd forgive my marketing-speak.

Moch - a batch higher than me, and occasionally the other end of the conversation on Twitter - didn't get it too. It's just customization options, we both agreed. How sweet do you want it? Do you want pearls in it? Jelly? What kind of tea? This sounds quite connosieur-y to me. You'd usually get this level of customization if you're flying a private jet. But everyone has it now. That should explain the long lines.

But, why the fuss, then? I had this argument of sorts with my mom a few days ago. I insisted people can always buy it at Chowking. She said not everybody knows it's been always at Chowking. And cheaper, too. (Also Moch's point.) Perhaps people think Chowking's too mainstream to warrant this much attention? The very reason why Serenitea and Gong Cha and Chatime and Happy Lemon and all those other milk tea places thay have sprouted everywhere have long lines? Image?

And here I am, trying it, because there is no line. At least until I started writing this blog entry. It's a slow Thursday afternoon, but it hasn't deterred two yuppies, a pair of grandparents with their son, two grandchildren and employed nanny, and seven college students, probably trying to look cool. We all went through that stage, whether you admit it or not.

I'm here, in the middle of my two-week buffer period, fresh from getting my laptop back from the repair center (again) and having my mobile phone repaired (why, technology?). At Gong Cha, because Tonet seems to like it, and somehow I trust her taste. (Really. Why not trust the person who likes Camera Obscura as well?) I ordered a medium-sized milk alisan tea, with added pearls. Full sugar, because "it's my first time," as I told the guy on the counter.

It's refreshing. It definitely works best after a long day, which in my case, involved a hot chocolate from Starbucks, a Double Chocolate ice blended drink from CBTL, and gulaman from Siomai House. And walking. Lots of walking. I just want to sit down while waiting for my mobile phone's ribbon to be put in place, and hoping that nobody gets somebody's contact details from my phone.

And I still ask. Why the fuss, then?
And your responses...