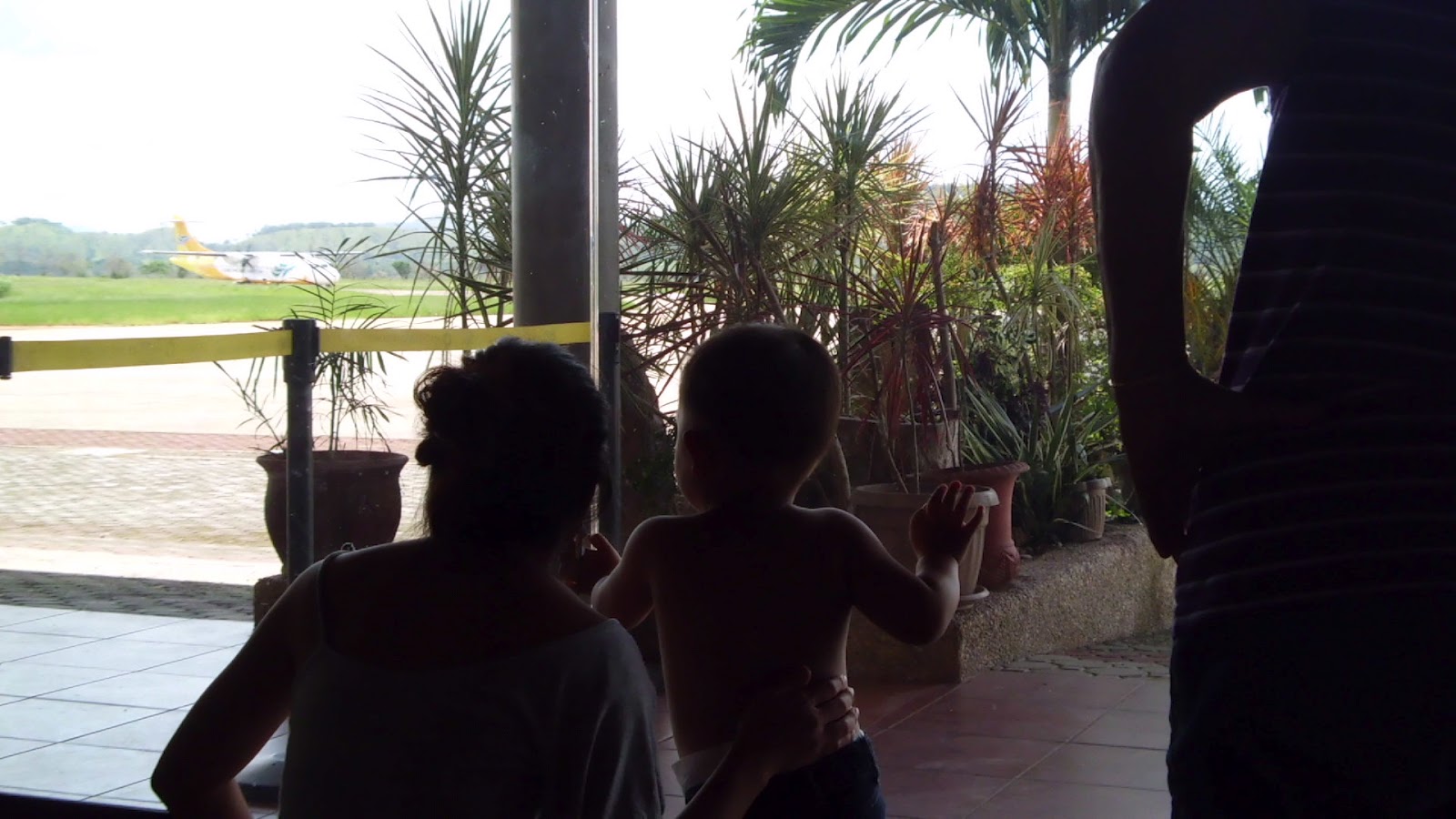 The two hours or so you spend waiting for your flight to arrive is a pretty awkward time. You don't have anywhere to go, and you don't have much to do.

I am, of course, fresh off a three-day company trip to Coron. Anybody who's been there would know that the airport in Busuanga is (understandably) small. The departure area has a bunch of seats, a small coffee shop which probably sells overpriced food, and a television for everyone's entertainment.

I haven't been to the coffee shop, obviously. I didn't want to lose my seat, and I just had a Coke, which I bought when the shuttle that picked us up from our hotel (okay, pension house) had a flat tire in the middle of nowhere... and right across a small store. I must also mention, the shuttle had a second flat tire minutes after it fixed the first one.

Also, the television at the Busuanga airport is turned off. Today is, of course, the day of Manny Pacquiao's fight against Timothy Bradley Jr. I know that free TV coverage of the fight is incredibly delayed, but we all need to feel like we know something. The wait was much more awkward than it should be.

Not that I was excited about the match, though.

I spent the time flipping through the issue of DestinAsian I bought out of impulse. Things don't seem so alluring now.

Nobody was sending text messages to anybody. The airport's in a bit of a dead spot. Some are getting text messages - "hilo na si Bradley, round 4," my brother would say - but we were in an enforced state of ignorance. Nobody was asking anybody about anything. Like anyone had answers.

I got bored with my magazine, so I ended up watching the empty runway through the big glass windows. It wasn't empty earlier - another plane just took off - but it's empty now, save a few baggage handlers, and yet people are standing by the windows, hoping to see something exciting happen.

"Talo si Pacquiao," my mom said from a few rows away.

The plane I was going to be on eventually arrived. A toddler, a two-year-old boy, who wasn't wearing a shirt, perhaps to ward off the heat - the airport's designed for windy days, and it wasn't a windy day - went to the window to watch the plane taxi into the apron. I think he tried to open the door, even. It is, I must remind you, a small airport.

"Where's the plane?" her Korean-looking mother, wearing an off-shoulder top, asked the boy.

I wasn't paying attention to the conversation, since I was too busy taking that photo. (I know. Stalker. Technically, "photographer" with no patience for release forms.) I do remember that kid starting to squeal, in this high-pitched voice, for no particular reason. He squeals, and he squeals again, and it suddenly makes life in the departure area a bit more interesting, because the waiting passengers were trying, collectively, to shush the kid.

They still weren't discussing Pacquiao's loss at length, perhaps because they don't really know that he, as I'd find out hours after the difficult landing in Manila, dominated the fight but lost two judges anyway. Instead, they were trying to shush a kid.

The kid stopped squealing, only to do so again while our plane was taking off from Busuanga.

I oddly don't feel like I've missed out on anything.

Well, I was watching the Miami-Boston game in our hotel room (err, pension house room) and we even finished it - virtually; the ending was a giveaway halfway through the fourth quarter - before we rode the shuttle that's get two flat tires in an hour. I don't watch a lot of basketball, but I still know something. So I guess that suffices? Or did the sense of belonging attained by doing virtually nothing inside the airport, alongside everybody else on the same flight as I am, count for something?

I don't know. Still, I oddly don't feel like I missed out on anything. I mean, I'm blogging and not frantically pressing buttons on my remote control just to catch a rerun. Sure, I'm curious (and I've always been curious) about how it'd feel to be watching the match live on pay-per-view, perhaps in a cinema, and watching Pacquiao lose. Riot in the streets, perhaps? Higher than usual crime rate?

I'm still not getting off this laptop. I guess I'm just tired. Or getting there.
And your responses...