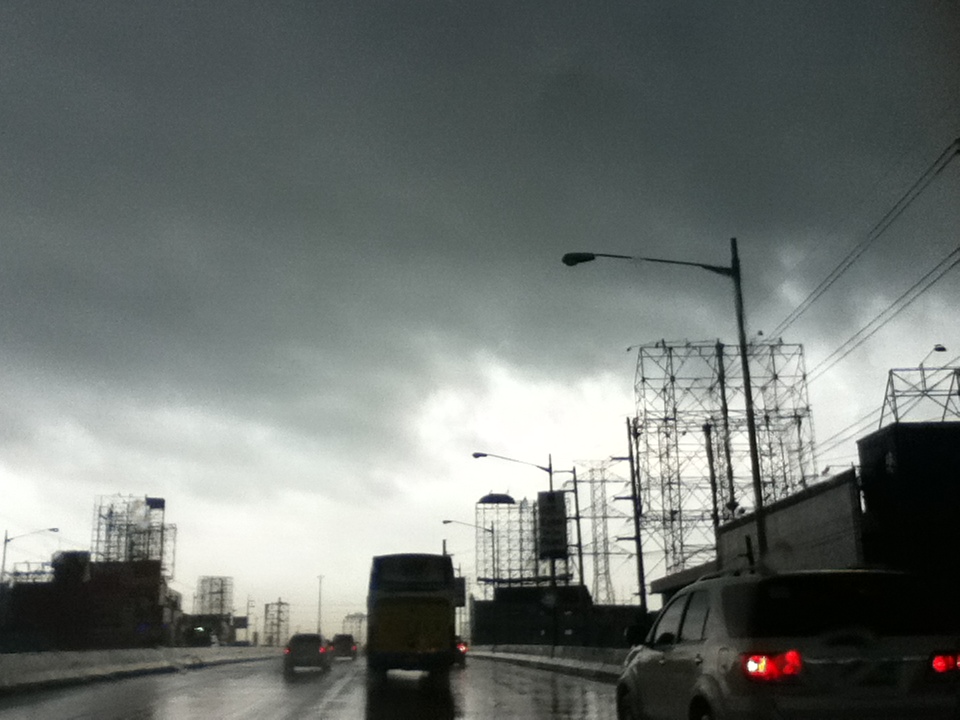 Or maybe it's because of the circumstances surrounding my return to the office this morning. The roads were quieter than usual. It was still raining hard when I took off, but by the time I arrived there only was a drizzle. The building where I work felt a bit like a ghost town - the basement parking had most of its lights off - and even if it was already quarter before eight, there was no rush to the elevators. I arrived to see the doors to my office locked.

My Twitter timeline - that sad, constant companion - was unusually cheerful. People were actually talking about the sun coming out. The sun has come out. Or maybe it seemed so much brighter because the past couple of days were grim, and the past couple of hours - the empty garage, the empty office - was the same. And surprisingly, I'm drinking the Kool-aid, even if I very well know that the weather bureau has said that the rains will continue until tomorrow. Immie was worried that there'll still be rain later today. Mika told her that it won't happen, because the sun has come out. I agreed, adding that the rain warning's been downgraded to a yellow. I know. Yellow, green, red. Why not green, yellow, red? But anyway.

Kimmy was quoting a quite apt song lyric. "Mr. Blue Sky, please tell us why you have to hide away for so long?"

It is a cheerful song. "Mr. Blue Sky" by the Electric Light Orchestra. It with the Beatles-esque progression, it with the literally rainy beginning and the long, glorious ending, leading to my favorite part of the whole song: the heavily vocoded "please turn me over!" plea, a callback to when albums were in LPs. The song was at the end of a double LP's side three.

"My favorite part was 'hey, you with the pretty face, welcome to the human race,'" Kimmy related. And then she laughed. Four ha's, all caps, with an exclamation point at the end. "Always loved this song."

Icka was the only one with a different opinion. "Given how effed up the weather has been lately," she said, "I doubt it'll last long."

"To be fair," I said, "it's pretty sunny in Ortigas." I surprised myself when I said that.

"For now," she answered.

It started to rain while I was in the middle of lunch. I ate nearby, but it's still sucky, not having either a jacket or an umbrella the moment the skies pour again. Fifteen minutes later, thankfully, there was a break, so I managed to return to the office relatively dry. The elevators were still empty, much like the carinderia, thankfully bereft of those annoying black jackets.

It really started to pour when I got back. My boss-slash-dad's room is surprisingly wet, rain water seeping through the windows of this newly-built building - sure, last week it had a glass door blown away by the wind, but this was still surprising, just as surprising as seeing the skies getting darker, and the buildings on the horizon disappearing, giving way to all the rain.

More surprising was, I was surprised. I knew this would happen, and yet I told myself, no, it won't. It has, and I felt foolish, very foolish.

The whole office was dismissed early, to the dismay of one colleague, who arrived just after the announcement came. (No, she wasn't late. She does sales. Sales people go places.) The rain got stronger and the skies grew darker, to the point that having everybody leave the office looked impossible. But not much was going on. Some of my colleagues, all of them from Pasig, didn't make it to work at all. And nobody knew what was going to happen next, because as Icka put it, the weather is so effed - no, sorry, fucked - the weather is so fucked up lately. All those roads where the floods have gone down, they start to get filled up again.

I don't know why the traffic has gone to a standstill along C5. We just got stuck there for a good twenty minutes before we decided to take a detour to McKinley Hill, where we also got stuck, but only for ten minutes and because of a traffic light. It felt so miserable again.

"We sang way too much," she replied.

"We just quoted lyrics. Should just be a drizzle."

"Ah well. When Mr. Blur Sky does come out it will be a grand entrance."

"And we will sing once again!"
And your responses...