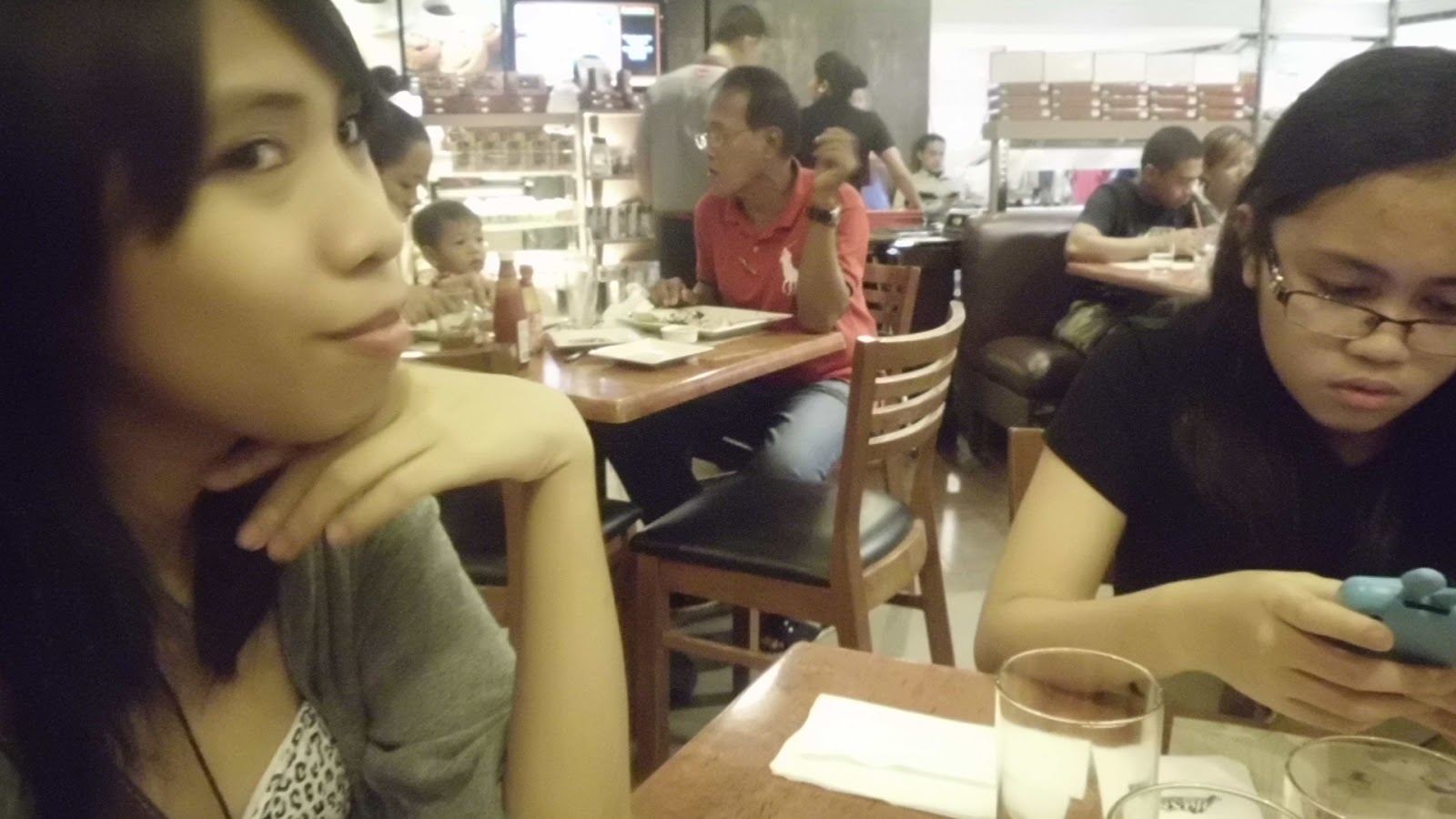 Let me see how this happened again. I headed to Makati, yet again, for another one of those seminars that don't really have anything to do with met, although I totally understand why I have to be there. I knew I had time to kill - more time than I expected, since I thought the seminar would end at five when it was actually scheduled to end at four - so I tweeted around, looking for people who'd be in Makati and are probably willing to meet up. Cue Clarisse sending me a reply at around nine in the morning.

Now, Clarisse, I don't really know her. I've been associated (for some reason) with the local David Cook fan community, and people follow me on Twitter assuming that I'm one of them. Again, not meaning to sound mean, but I'm not: I just happen to know a hell lot of them. Also, I make it a point to be friends with people for other reasons, which explains why I talk to Immie a lot about who's doing well on So You Think You Can Dance. That's how she found me, she'd explain: Immie tagged me a lot (for understandable reasons) and Clarisse thought I was one of them.

I only followed her this weekend, while we both watched our college pep squad slightly flub an overly-ambitious routine. She's a Lasallian too, yes: an ID 109 student from Planet Gokongwei, home of hackers and laptop-faced robots, and I mean that with no malice.

Franz, on the other hand, I've known for a slightly longer time. I don't remember why I decided to follow her, but I'm pretty sure she followed me for the same reasons Clarisse did. Our first extended conversation was her pursuit of this specific doll that she'd dress up as one of the Minoans - a pretty savvy, if not odd, way to integrate history lessons with her fashion degree, or something. She's lost in Ortigas. I worked in Ortigas. You know what I'd do. She's on the other side of Taft Avenue, by the way.

"Do I stalk you two?" I told Clarisse this morning, slightly intrigued by her mention of them going to Glorietta.

"If I do attempt to stalk you two, what do I get?"

"Nothing. I'm very socially awkward. But Franz isn't, I think. Meet us at your own risk."

"Why not? Hindi lang ako sure kung kaya, but again, why not?"

Yes, really intrigued now, never mind if it sounds too similar to this episode two years ago. I wish I could forget that happened. Not forgetting it, though, but trying my best to do things differently: no asking for mobile phone numbers. Leave everything to luck.

"How do we find each other, then?" Clarisse asked.

"'Yun lang! I have glasses. And I'll prolly have earphones on. Not very specific."

"I'm wearing glasses, too. We'll probably be in a bookstore. Also not that specific."

"There are two bookstores in Glorietta, and two in Greenbelt. I'll be in the same places. If we're still there."

"Up till what time? We're watching a movie around seven."

"I'll end at five, prolly be there until around six thirty when I go home. Dadaan lang ako."

"Hopefully we'll be there before five. We're leaving DLSU around four. So I'll see you when I see you?"

I swear, I did not try. I did go to the bookstores. Only one of the Greenbelt ones, and, as it turns out, three bookstores in Glorietta. I was going to head home when I remembered to buy some stuff for my mother. I then decided to check for a wi-fi spot - miraculously, I got through the mall's free connection, and found that Franz made a critical mistake: she tweeted about ditching me, while giving away her location. Granted, I still don't know Glorietta as well as the malls nearer to my place, but if you're arriving from DLSU at around five, and you'd be taking a quick snack at a Max's branch, you'd only be in one place.

They were busy talking when I came up behind them. "Excuse me," I sheepishly said, expecting I had the wrong people.

So what did I get in the ninety minutes I spent with the two, who turned out to be high school friends from a school relatively near (but not that near) from my place? More or less, the ability to fully articulate what I already knew but never quite admitted to knowing.

Us guys, we fall in lust before they fall in love.

We don't really talk about our feelings, but when we do, we put everything on the line.

We are very paranoid, assuming things even if the thought isn't quite complete.

I know. I went there again. Why is it that, when I meet people, I end up telling them about my heartbreaks, or at least hinting about them? Dominating the conversation is one thing ("I'm the listener type. Even if it doesn't look that way." Ugh, Niko, move on!) but spilling your heart out, however novel your approach may be, is another. Now I know why I make a terrible first impression on the ladies. Sure, I make them laugh, but I do too many things too quickly, and depending on the mood, and as Franz can definitely attest, I can be really, really hyperactive. People hate it when I'm hyperactive, but I was like who cares? throughout those ninety minutes.

We don't really talk about our feelings, but when we do, we put everything on the line. So do not answer us with "awwww" or something along those lines. It's the most condescending thing girls do to boys. Yes, I know, you love talking about feelings and all, if not Matt Bomer's body parts, but you don't go "awwww" on us. On me. Even if it is a joke, which what I said probably is. It is. And it is insulting.

But I'm sure she now understands that, yes, I am the sort of person who likes girls, and gets my heart broken all over again. She now understands it too well. Ask the people who saw a guy carry a girl near Max's SM Makati at around a quarter before seven tonight. Yeah, I do make a terrible first impression, I admit.

I can also tell you that Clarisse had no idea Haley was in a meet and greet near her place. Also, that Franz's arm is half as wide as mine. Also, my presence scuttled their plans to tour every bookstore in the area, the locations of which were alien to them in the first place. Also, the bus I rode had, of all things, a David Cook playlist on.
And your responses...