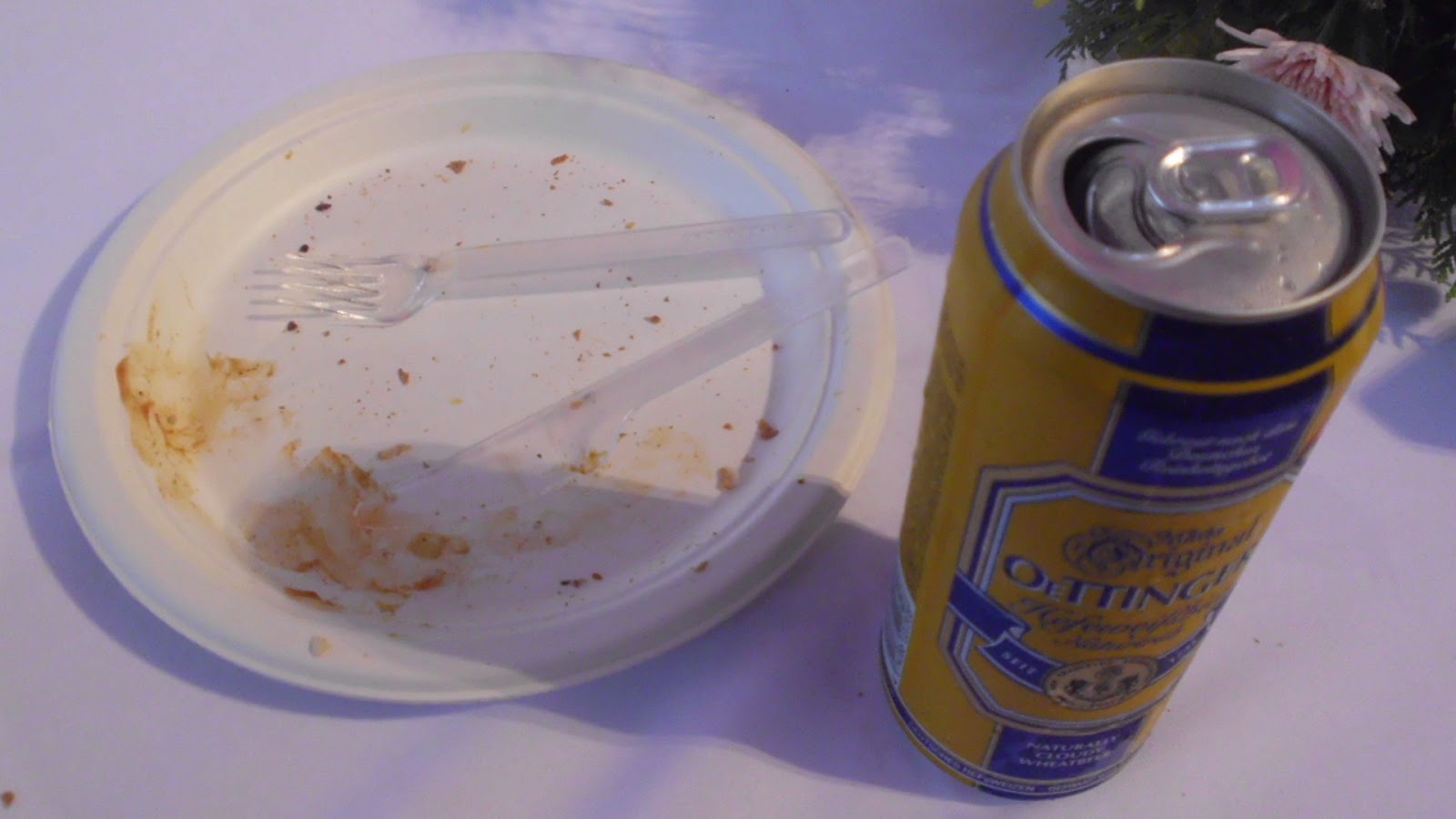 In a nutshell, my job means October is a month of drinking. Lots of it.

Since I work for a German company, I end up being surrounded by a bunch of Germans in certain occasions. But this month's a bit of a killer. That thing going on at Bonifacio High Street this weekend? We're one of the sponsors, and although we don't have a booth, you've probably seen me around. (Or not, in Chexie's case. I texted you!) And then there's Oktoberfest at the Sofitel next week. The concept of drinking with your clients to keep your relationships fresh is very much alive, kids.

As for me, I wouldn't pass the chance (obviously) to try some German beers, pretty much like that mini beer-tripping thing I did in Bangkok. Never mind what Huey told me a few days ago - that German beer is more, umm, bland than our beer - I still wanted to try it. But then again, the other thing getting in the way is the price.

The cheapest German beer available was Oettinger. I'm learning just now that it's the biggest-selling beer in Germany, because it's just so damn cheap. Here, it only costs P150 a can. I know, it's one hundred fifty freaking bucks a can. It's expensive already. But still. Also, it's a 500ml can, which, I think, pretty much amounts to two cans of our beer.

Today, I had three cans of those. A liter and a half of German wheat beer. Deutsches hefeweizer-bier. Okay. Sticking with the theme now.

We had a team in the event's table football cup this afternoon. We did miserably, to be honest: we lost all three games in our group. To be fair, we - our company, not me, since I haven't played, umm, foosball - we were in the same group as last year's champions, and pretty much all the teams were composed of German citizens, or Filipinos with constant access to a table football set. Also, it was still fun. I mean, who would've thought watching table football was such a thrill?

Then again, in my case, I was watching one of the female contestants. Another team, obviously. Another group too. Funny how they don't seem so uptight when here in the Philippines. Or is it just that stereotype, of Germans being so mechanical and precise? Last night, during the opening ceremonies, they were all in suits. (The dress code was smart casual.) Today, it's loose white shirts, their hands forced, definitely, by the fact that it's not raining this year as opposed to previous years.

Those other German stereotypes - they love their beer and their football - are definitely in full effect, though. What if, I thought, we saw something like that among Filipino women? They love their beer. More common than you think. They also love their basketball. Yeah, also likely, but I see people who watch the NBA because there are cute basketball players - and who search for those cute players because they have to relate with the men in their lives who watch the game closely - so... I don't know. I mean, do you know a girl who plays NBA 2K13?

I don't know if I'm thinking of this because of the three cans of beer I had. Maybe it's the surprisingly sharp mustard that came with the bratwurst, I don't know. I don't drink much, I have to reiterate, but if your client buys you a drink, you do not turn it down. I found myself in the same situation I had in Cebu: seven bottles of beer later, I found myself with a bit of a headache, although I'm absolutely convinced that I'm not drunk yet, because I wasn't having beer goggles yet. That girl is beautiful. She's like Bianca King with less freckles and more twinkle. And she plays table football. And she knows her beer, or at least her friend does, because she - the friend - approached our table as they left the main tent after they got eliminated from the tournament.

"Did you know that's the worst German beer?" she told us, appalled at the number of cans of Oettinger on our table - a dozen, since there were four of us drinking.

"But it's the cheapest!" my dad countered.

"It's terrible German beer," she said, smiling, but definitely appalled.

I didn't say I was aiming to try the best German beer ever. I mean, I didn't really dig that deep in Bangkok. At least I got to try something pedestrian. And I got to warn, more or less, Jose, who I bumped into before we left. "Went with good ol' pale pilsen," he'd later tell me. "'The only beer that nourishes Filipino friendship.'"  It's Czech, by the way.
And your responses...