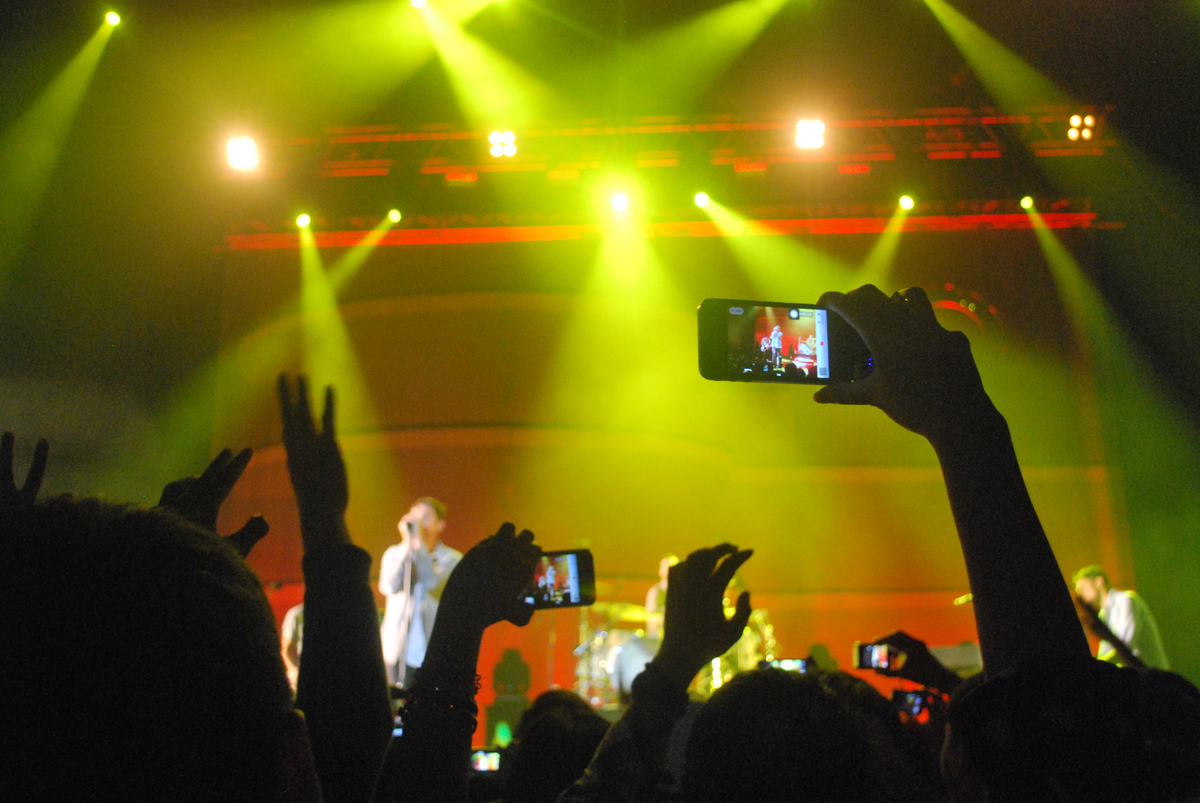 I paid six thousand bucks for my tickets to Tuesday night's Keane concert. In theory, that should get me a relatively good spot in front . Sure, it's the ninth row, because I dithered a bit about buying a ticket, in an attempt to look for someone who would watch with me - I'm looking at you, Janelle, and also, happy birthday to your sister - but seat plans always look bigger than the arena itself. I got to my seat and was surprised at how close I am to the stage.

I've said this many times before: after the Vertical Horizon concert five years ago, where I got myself (and Karla) a patron seat thanks to my professor who then worked for MTV Philippines, I've decided I cannot watch a concert from far away. Then again, I don't really watch a lot of concerts. My favorite artists don't really come here, and when they do, I'm still pretty picky, the reason why I only settled for meeting Haley Reinhart rather than watching her live. (It sounds like a very good deal.) So when I heard that Keane - the band who I credit for making me a music obsessive - was coming here, I obviously decided, then and there, to go. Sure, I dithered, but I still went. And I still had a VIP ticket.

So what am I getting with my six thousand bucks? There's that good seat. There's the assurance that I have a good seat, meaning I can arrive at the venue around ten minutes before the concert is supposed to start (and they don't anyway). And then there are the amenities.

Clarence now works at the Mall of Asia Arena. She told me this months ago, but I decided not to announce it to the world because I don't really want people to go to her asking for freebies to whatever. I did ask her things - they allow DSLRs, for one, as long as you don't use professional lenses, or the organizer specifically states otherwise - and, being the needy person that I am, I had someone to talk to about the whole thing. Sure, she got to meet the band and I don't, and I didn't even get to give her my CDs for the band to sign (which was, as it turns out, our unspoken plan all along) but at least I got to tour the arena.

It's very spacious. There weren't many people watching, but I figured even on a packed day - say, this Saturday's UAAP men's basketball finals, where my cousin got lower box tickets without a seat - it wouldn't be as claustrophobic as the Araneta Coliseum. There are a lot of smoking lounges; four per floor, I was told, although not all were ready yet, which is a shame, because there'll be a lot of depressed Blue Eagles on Saturday. Also a lot of food stalls: a bunch on the first floor, a bunch more on the second floor, and apparently, a bunch more on the fifth floor. Clarence swears by the nachos at one stall - I only ate after Elaine, who got free tickets, virtually forced me to, and the cheese is indeed good. She also swears by the corndogs, so much so that she treated me to one; I tasted a hell lot of margarine in there.

One place I never got to tour - thanks to Elaine arriving - were the private suites. Now that, that's worth a lot of money. It's for venue sponsors, Clarence says. "Kunwari, PLDT, they provided our wi-fi." It's surprisingly decent wi-fi, so in return (well not really) they get a private suite with two butlers and a good view of the events below... which makes no sense if you're watching a concert, because you have to be as close to the stage in that case. Not even access to the exclusive cafe at the third floor will compensate for that.

So, fine, I'll have my corndog, my DSLR and my ninth row seat. And I'll have my two hours of Keane, relatively up close, thank you very much.

"I was seated on the seventh row but I went to front and center as soon as it started. Eager lang." That was Francesca, a person I've never met before, and only crossed paths with after she retweeted my tweet on the concert the following day. She obviously knows about these things more than I do. Also, she went to the meet and greet, something I deliberately skipped because of work.

So there I was, standing at my ninth row seat - which was right beside the aisle, if you want further insult to injury - and not budging an inch when the people behind me started to occupy the VIP area, the very place I paid six thousand bucks for. Concert-going lesson number one: buy the second most expensive tickets, hope for a small turnout, and rush to the front as soon as you can. As if I could, with my bag, my camera and my Uniqlo purchase.

I eventually moved forward. Figured out how to operate my camera in such circumstances. Started taking photos. Bad ones, mostly: five hundred were taken, but only a tenth were good enough for publication. Getting good photos was just second priority, though. I had to soak in the moment. And it was glorious. That surreal feeling of having many people sing along with you? Of having Tom Chaplin sing your favorite song feet away from you? And you sing along, consciously trying to save your throat, but you sing out loud anyway because you cannot hear yourself? Francesca thinks it's a magnificent experience. I think it's a spiritual one.

And then people started moving, leaving their spaces in the front (oddly), and me and a bunch of other people, we found ourselves moving progressively closer to the stage. I ended up somewhere in the sixth row. Maybe fifth, I don't remember. I was beside a sixteen-year-old with a glow stick, and then, behind a tall guy who insisted on raising his hand like a pastor, and then, a girl who could be pretty if not for all that make-up. (No dice, Dex.) And I was taking photos, and I was breathing heavily, and I felt something. Yeah, I know, the music snob in me (and most of you) would probably scoff, because this is Keane, a band best known for soundtracking several Grey's Anatomy episodes, and if you've gotten there, you've gotten too mainstream for comfort. But this is Keane. They're the band who I first really fell in love with on that afternoon in the car early in 2004.

"Sinong kumanta niyan?" I asked my mom, who was driving me home from school. I assumed it was a band from the 80s. I assumed she knew.

So I just listened. I was a high school sophomore then, socially awkward and tired and possibly falling in love and, in reality, very much looking forward to taking off my leather shoes, and it all came together. Everybody's changing and I don't feel the same.
And your responses...

what a good read! - Francesca