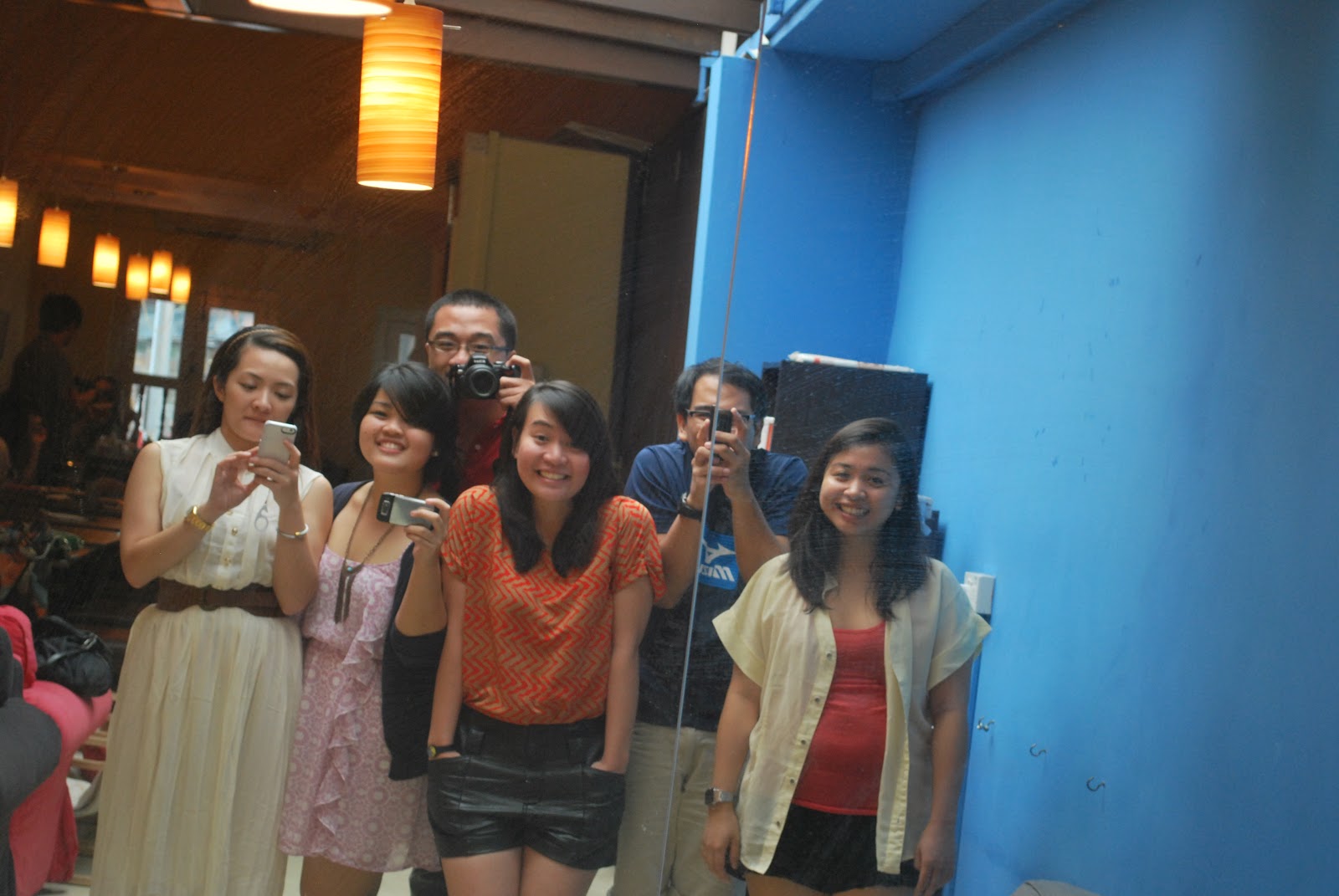 I don't remember when this story happened. I just know Chamy told us this last week. Maybe it happened the week before, considering that the story involved her getting on a taxi in a foreign country and telling the driver where she wants to go in an American accent.

My impression was that she tried to speak in an exaggerated Valley accent. You know, like, like, like this? Nah, that doesn't sound right. Anyway, she definitely didn't succeed in convincing the driver that she is American, or at least vaguely Western.

"Are you from the Philippines?" the driver asked her.

"How did you know?" she asked back.

"You have Philippines written on your forehead!"

It's Sunday afternoon in Singapore, day one of my eight days there, spent partly to attend a regional meeting, partly to meet up with my sister who's trying her luck there, and partly to say hello to old friends and a bunch of others. (And, also, to spend far too much money on CDs. But that's always collateral damage.) I'm in a slightly posh, and apparently well-regarded, pancake place along Prinsep Street, meeting up with Mae, Nadia and Marielle, who separately took job in the country and, inevitably, gravitated together, being blockmates and all.

Nadia was the first to move there, two years ago. Her first job, a corporate job, a job so well-regarded I inevitably didn't get it. Marielle just moved here a few months back, and Mae followed suit a couple of months later - I know, that read very vaguely - anyway, both worked in advertising before, and they still do now.

Chamy, who I first met in religion class as a math major, shifted to something more business-y somewhere, which explains why she also knows the three girls. There was this odd surprise when we all found out that we know each other, and we ended up meeting up at this pancake place along Prinsep Street, on a rainy Sunday afternoon, me tired from walking around - the meeting place changed just as I got to the meeting place - and her, having gone in circles with her friend. She's not working in Singapore, by the way, although she was on a business trip like me.

Anyway, we caught up. The usual "what are you up to?" questions. I last saw Mae and Marielle over a year ago, during Misha's film premiere at Cinemalaya. I last saw Nadia two years before that, when I returned to La Salle to watch her campaign. Chamy? I cannot remember at all. And yet - cheesy epiphany alert - in the two hours we spent there, eating pancakes and laughing at each other and making sure we were comfortable (which I wasn't, and only because my chair was so small), I realized that not much has changed. It's like we were talking in La Salle, or one of the restaurants outside La Salle, although in this case, it's a restaurant outside a different La Salle, and I'm actually thinking of this school, which is not even remotely La Salle-ish.

"We've known each other seven years!" I said somewhere. Yeah, trust me to make something gloopy out of a light-hearted catch-up session. "Or, in my case with you," gesturing towards Mae and Marielle, "six."

I'm amused at how many people went to Singapore the same time as me. There were some of the David Cook fans, the extraordinary timing of a concert happening there the same week as my visit (well, the same night my meetings end). There was Chamy. There was Yoa, now working in Vietnam, but was in Singapore for... I don't know, really. Her birthday, I assume. We tried to meet up but couldn't, something about an archbishop holding her back or something, and in a good way, I must note. (It's Saturday night in Clarke Quay, and I'm surrounded by monsters, or at least people dressed up as monsters for Halloween.) It's just that, no matter what we do, we all somehow find a way to gravitate towards each other.

"You have Philippines written on your forehead!"

I guess it's a means of surviving, if we could put it that way. You go to an alien place and the first thing you do is look for a familiar face, or something vaguely close to it. You can try to blend in but you don't succeed. You don't quite succeed.

This was my first solo foreign trip, and I was partly worried that I'd run out of English. (Marielle: "Ikaw, mauubusan ng English?") I got along with everybody, from my Indonesian counterpart who I shared hotel rooms with, to the many Chinese speakers in our contingent. But I inevitably spent a little more time with the English speakers. Not that I speak good English. I'm actually not very confident when it comes to that. Too many times did people say "excuse me?" to me, and only because I spoke so fast and had a slurry American-ish accent to go with it.

On the upside, I'm kinda happy when the conversation somehow shifts to things that are distinctly Filipino. What's the best translation for "hello"? I don't quite have that, because it's not "mabuhay" and it's not "magandang umaga", although that one sounds best on a telephone. What's the best Filipino food? Get past all the Chinese influences (and the late realization that the lor mee in the hawker center beside our office is pretty much the thing we call lomi), and you have adobo, cooked in vinegar and soy sauce and garlic. Enthusiasm personified.

Another one of my colleagues - based in Dubai, born in Hannover - had this story of seeing her Filipino colleagues gather for breakfast. She doesn't eat fish, if I remember correctly, so imagine her reaction when she sees her colleagues eat fish in the morning. With lots of rice. And yet remain thin.

I don't remember how the conversation went after that, but I felt extraordinarily proud. Maybe it's because one of those men she saw was a former colleague of mine. Definitely because I had a chance to fly the flag, somehow.

We Filipinos, we're known to blend into our surroundings far too well. This occurred to me again when I was telling my colleagues about our history. (These conversations aren't as serious as they sound. We somehow always stumble into something we have in common, something I attribute to us being neighbors. And land bridges. Remember the land bridges. Elementary school.) I have small eyes. So am I Chinese? No. Where does my last name come from? The Spanish. Sometime in the 1860s or whereabouts, the colonists decided to give all the natives Spanish surnames, which explains Francisco Balagtas becoming Francisco Baltazar. Three hundred years under the Spanish, fifty under the Americans. We now have terrible traffic jams and humongous malls, but apart from that, I can't quite pinpoint what makes me Filipino.

"Well, there's the fact that we sing and dance a lot," I told my Dubai-based colleague the day after our training, while we're finding our way through Little India.

"You dance too?" she asked.

"Not really. But you know what I mean. We tend to find ways to be happy." Exactly what she pointed out about Filipinos a couple of days ago. The callback, I assume, was lost on her.

When I worked with Jason on a couple of PSAs targeted at the Filipino-American community in Los Angeles, I learned of this common problem among their sort: the young ones becoming more American than Filipino. You can't really blame them for assimilating, but there's a part of me who wants to see these kids still have a firm grasp of their roots, more or less. You don't want them going, "no, I'm not a Flip!" but you know very well that they'll do that sooner or later, shy away from what they really are, more so if you actually spent some time in the Philippines, like an old family friend of ours whose kids virtually forgot how to speak Filipino. All this, while I try not to run out of English, which is an exaggerated concern, really.

But elsewhere, that's not really the case. Sundays at Statue Square in Hong Kong, or every single day at Lucky Plaza in Singapore. A waitress at the pancake place is Filipina. "I'd like to order a large stack and a Nutella shake," I said, in not-so-Valley English, and she replied, "out of stock na po," which was a relief, to be honest. Somewhere in the Middle East, you have our folks eating daing na bangus for breakfast. Or someone craving for pan de sal in Paris. Maybe that'd work great with some brie?

And, on certain days, we'd all gather, talking about stuff. Kamusta ka na? Ano nang trabaho mo? Doon ka pa rin ba? Tumaba ka na! Chamy actually said that last bit. Very first thing she said once she saw me. Every little thing we do to, unknowingly or otherwise, fly the flag. Funny how we try to adapt - funny how we change without us noticing - and then, in the right place at the right time, it seems that nothing has changed. Yes, it has been seven years since we all first met and became friends. In those seven years, well, all of this happened, and yet, see?
And your responses...