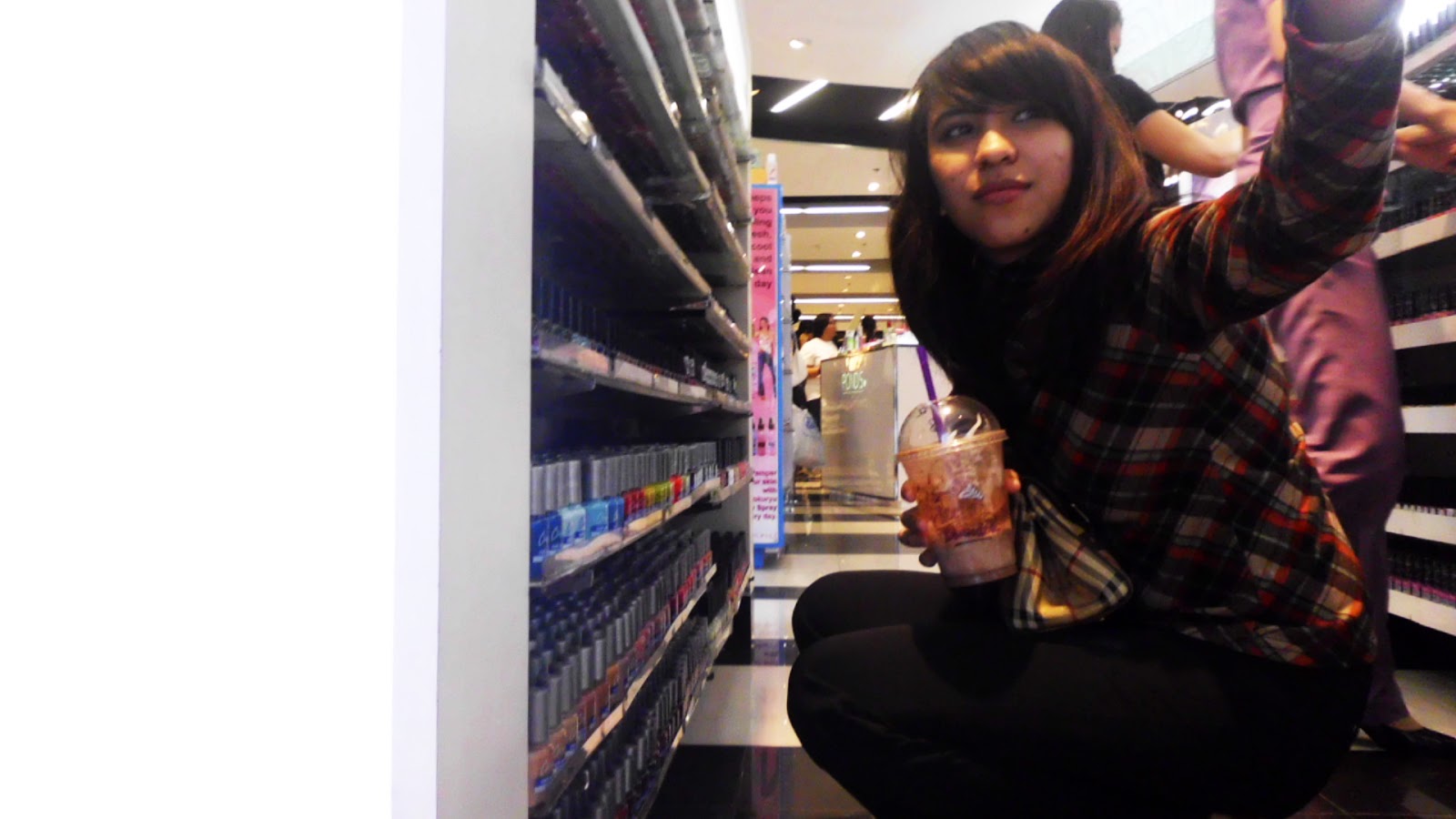 Rainy (yes, her, again, and yes, that's her in the photo up there) said she'll bring her Ralph Lauren bag again. Instead she showed up, outside her office building on a hotter-than-usual Saturday afternoon, with a Burberry bag that matched her flashy turtleneck that, as she pointed out, does nothing of that sort because the fabric is thin.

I thought she'd recognize me, but she walked past me, covering her face as she tried to avoid the sun. I don't remember what I told her, but she told me that she did see me, but she didn't recognize me. Again, the excuse: bad eyesight.

Her turtleneck is flashy. And it matched the bag. There went my plans of torture by entering Greenbelt 4 so we could cool down while surrounded by all those luxury bags and exhibits on "the art of packing".

I was meeting her again - second time in three days, isn't that a record? - in the middle of my Christmas shopping. Turns out it's mostly me shopping for myself again - adding items to my workplace wardrobe not being the most exciting thing I could do - but I was also buying gifts for people, too. And that's what got us in trouble yesterday.

Well, that, and Rainy's Burberry bag.

She had the unfortunate duty of helping me pick gifts, because I take forever to pick them, thanks to my urge to be proud of my purchases and impress my recipients at the same time. (Also, the idea that the girl is the one accompanying the boy. Also, the idea that she's 19 and she knows these things, and I'm almost 24 and I don't.) That led us to the Rustan's flagship store in Makati, and to the perfume section, because I don't know how to buy those bottles, and she does. There's a "secret luxurious life of Rainy" thing going on, which should explain for the flashy onion-skinned turtleneck and the Burberry bag. It was the wrong time for me to be deferential. "Guide me," I kept on telling her, because really, I don't know where I'm supposed to go.

Suddenly, a salesman was on to Rainy, telling her about this item and that item.

Then again, she knows where to go.

Next thing we know, we were seated by a counter, and this guy was whipping out their bestsellers - three bottles of perfume, and a canister of coffee beans to mute our noses and stop it from confusing us. The first bottle was too intense, too old. The second was good, perfectly masculine yet not too sharp. The third was, frankly, a bit girly.

The guy was acting all expertly. He sprayed the contents of the bottles on strips of paper, a precise six inches separating the two. And he didn't just take the bottle and spray after making the distance; there was this deliberate pause before he hit the trigger. Do you call it a trigger? Nozzle? See, this is how clueless I am. I have my own bottles of perfume, but I never bought them; one was a gift, and the other was passed down to me, and both aren't exactly designer scents.

"I think I prefer the second one," I told Rainy, not realizing what we were getting ourselves into.

"I think I'll get the second one."

The salesman left to get a box, and Rainy started to panic.

The plan was to go get a gift set. Small bottles, nicely packed, and definitely cheaper than buying this whole bottle costing, I don't know, five thousand bucks or something. Also, it's definitely a two-birds-with-one-stone thing. I am utterly inexperienced with these things, and I was definitely enjoying the experience of buying perfume, so inevitably I was on the verge of being proud of the fact that I was making a purchase, which means I'll be proud of my purchase, which means I almost parted with, well, over three thousand bucks.

I don't hate salesmen. I work in a sales office, and my colleagues who do the selling are nice and fun to be with. I don't like, specifically, two types of salesmen: those who sell insurance (except if you're my aunt) and those who work in boutiques, because when you start browsing they start hovering around, watching you as if you're going to snatch one hanger and run away with it, always accompanied with a chirpy "hi ma'am sir!"

Realizing all that, and shuffling uncomfortably in that chair at a perfume counter at Rustan's, awkwardly hitting Rainy as if it's her fault... it's not the best feeling, really. I was played. I was played! I'm tired from all the walking, around the malls and to Rainy's office and back, and I have a headache of sorts, and here I am, blowing my money on something, trying to rationalize the steep price tag, and now I'm backing out! I was played!

The salesman returned with a box and a beaming smile on his face, which suddenly struck me as terribly insincere.

"Sir, have I mentioned that this is the perfume John Estrada uses?" he said. "So this is celebrity perfume, sir."

"Wala ba kayong gift set?" Rainy asked. I should've had her do the shopping. And yes, I know that sounds terrible, but not as terrible as claiming that she talked me into this.

"Umm," I said, "can we just get back to you later? We're just canvassing muna."

"Babalikan na lang kita once we have decided."

"Okay, sir," the salesman said, resignedly, finally looking sincere. Or maybe not. He asked for my arm and sprayed the perfume on my wrist, that same six-inch gap, that same little pause, looking all professional, but not anymore, because I was caught up in my stupidity to not be annoyed. "Later po, ha!" No longer sincere. "Thank you!"

"Salamat," I said, as we shuffled our way out of our chairs, and back through the labyrinth that is the perfume section, only to find ourselves followed by another salesman, who had the gift set that Rainy wanted to see, albeit one that we didn't buy.

For the next four hours we were together, I apparently smelled like John Estrada. Or at least my left wrist was.

"I think they saw my Burberry bag and followed me around," she later told me, leaving the CBTL branch at Greenbelt 3. "Kung ikaw lang 'yung nandun, they would've ignored you."

"Maybe they're trained to spot Burberry bags," I said.

That probably is true, because when we went to Landmark so Rainy can buy nail polish, nobody came to pester us. Although, really, it's likely because bottles of nail polish only cost under thirty bucks, and it doesn't matter whether you're carrying Burberry or Bayong, or whether you're buying rose red or kiwi, or whether you treat the experience as something that you laugh about or something that scars you forever. Or for fifteen minutes, I don't know.
And your responses...