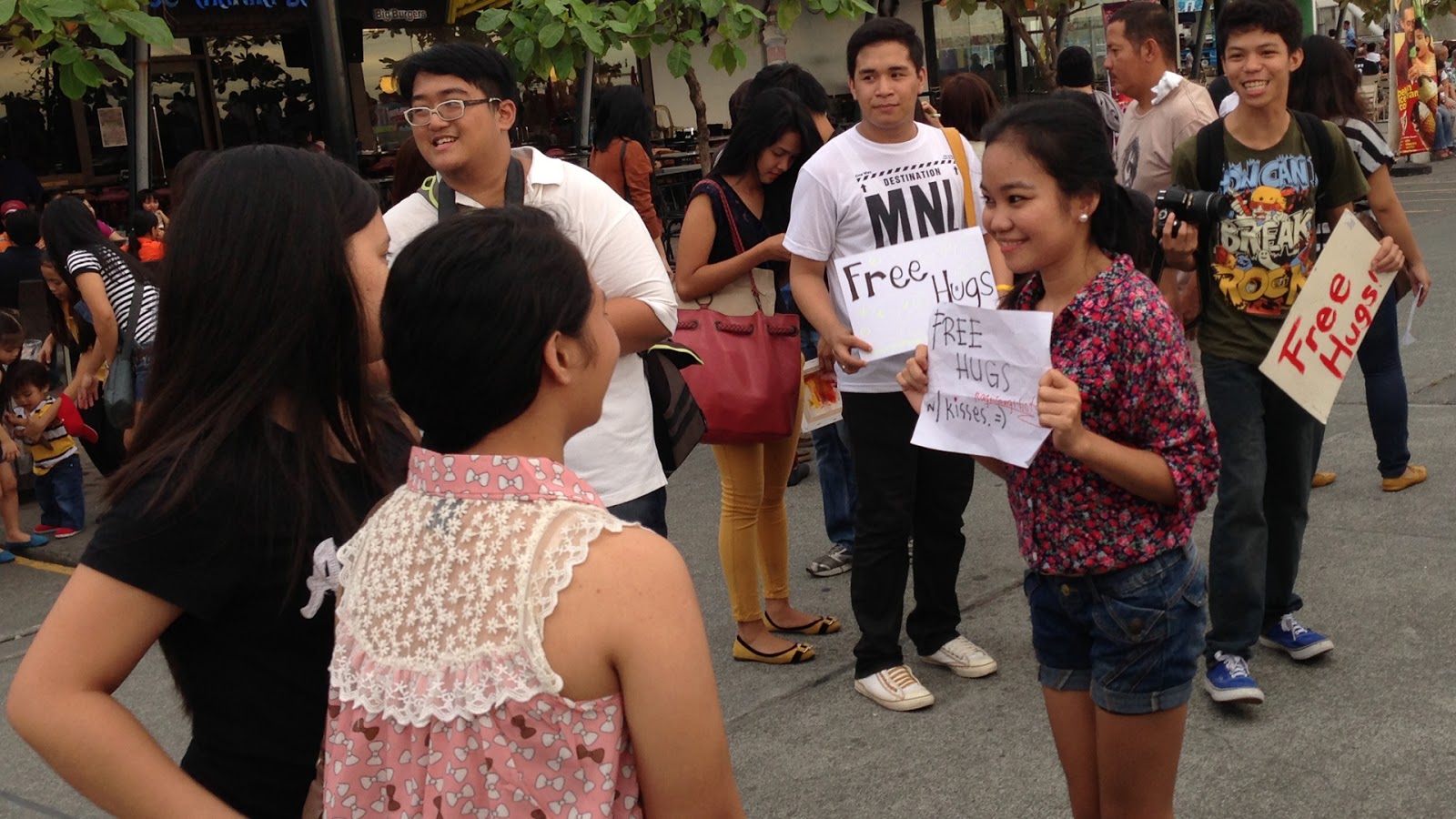 Among the loads of people at the seaside thing at MOA yesterday were these... students, I guess? They were all walking about with these signs in their hands, some made of sturdy cardboard, some from not-so-sturdy cartolina, and some from flimsy bond paper.

My blogger mindset - Rainy's term, not mine - meant I brought out my camera and started taking photos. I finally got an iPhone, so I'm guaranteed to have better photos now: the HP camera I got for free over a year ago is so shitty (read: it looks milky even in good light) even HP employees who get them for free refuse to use it. And yes, I mean that. I shared a table with a couple of them the night I watched Dia Frampton perform, and they said exactly that.

Anyway, I took photos, and I realized I wasn't in the best of places. We were seated at the seawall, alongside pretty much everybody else, mostly couples also looking for us time. We weren't very far from the free hug crowd - free huggers? - but it meant a lot of dead space and extra people. I just snapped away, disappointed that nothing really was happening. They just kept on offering their free hugs. "Free hugs!" "Free hugs!" "Free hugs! With benefits!" And nobody was taking up on their offer.

I love a free hug, but I was with Rainy.

Rainy, on the other hand, wanted to take their offer up. And before you think she's being a bit of a prick around me, well, no. No, no, no, she's not being a prick around me. No. We had this cheesy conversation as the free huggers stayed on their spot, peddling themselves, so to speak. Something along the lines of "we can always give each other a free hug" or something. What she wanted was to go down the seawall, approach them, and ask for a free hug, just so I'd have something to photograph. Nobody was taking up on their offer, and they were looking a bit foolish out there.

"Do you want me to give them a hug?" she asked me.

"Up to you," I answered. It's not like I'd be jealous or something.

She didn't go down, because we were seated already, and the seawall was pretty high, and we were feeling lazy already.

I'm surprised the free huggers didn't move. They seemed to be getting a bit bored. When they start taking photographs of themselves holding up their signs, you know they're bored. Or you assume they are. Granted, I don't really know what their plan is - for all we know, it's a trap, with me as the target, and I am falling into their scheme as I write this blog entry - but the seaside thing was, well, long, and crowded, and somebody out there was bound to want a free hug. But then again, if you're the type of person who wants one, you wouldn't go to the seaside. You wouldn't go to a place where people with company naturally go.

"I've never been here," I told Rainy as we crossed the road. I do know the place, though. On my second week at work I was at MOA at nine in the evening, prepping for an exhibition the following day, and I waited for my colleagues while looking at the observation wheel, all bright and colored and scary - and only because something so heavy on top of something reclaimed by the sea could only go so far. I'm overthinking again.

She has, but then again, she often hangs out with friends.

I don't mean to paint myself as a lonely person again. I think I said something along the lines of "I'd rather go around the mall" or something, which, in hindsight, sounds like me being a prick around her. But that's what I did then.

I stopped taking photos and gave my phone to Rainy. Her turn to take photos. Of the sea, in this case, and occasionally of us, and occasionally her Scrump plushie thing. Suddenly, more free huggers came, and I just grabbed my phone from her and took photos just as they began hugging each other. The free huggers are giving each other the free hugs nobody wants to take from them. It's a bit sad, a bit pointless, but in some way, a bit poignant, too. Okay, mostly pointless for me. Unless, again, if it's a trap. Or a social experiment.

This blog entry was supposedly a more, umm, cheesy "date journal" of sorts. "This will be a well-documented date," I told Rainy when we finally met at the mall. All we did, really, was eat chicken for lunch (again) and watch Warm Bodies (it's, well, warm) and exchange cupcakes for Chinese New Year - the frosting in hers got so soggy it lost its supposedly minty qualities - and watch the sunset and make plans for riding that observation wheel. Ferris wheel. Ferris wheel. She's never been in one with someone else. I've never been in one at all. Turns out we have to pay P250 to have a gondola all to ourselves. Nah.
And your responses...