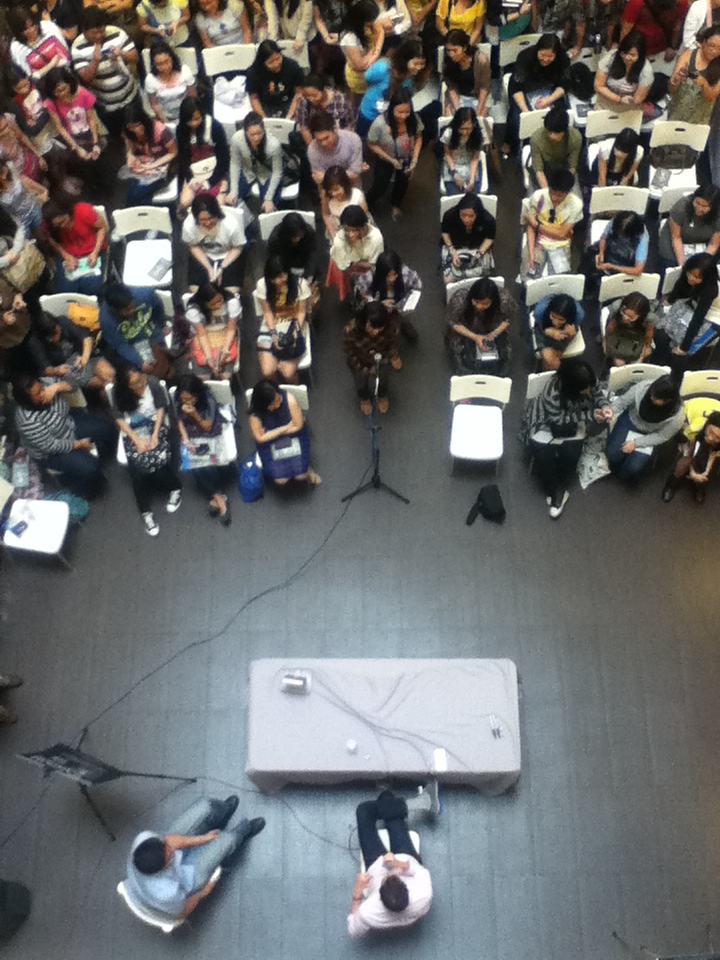 If I wanted to really rile up a bunch of book readers desperately waiting for a chance to meet their favorite author, I should've said something like this: "John Green is jologs."

Of course, I haven't read any of his books. I'm just saying this because everybody seems to like him, and everybody is buying his books (and going as far as asking bookstores if they have stocks - but duh, they do, they obviously do!) and everybody is quoting his words on anything that resembles a status message. Yeah, it's probably the reluctant hipster in me brooding, my semi-automatic sneering of anything mainstream.

But I do use John Green as a bit of a calling card. Whenever my book-loving colleagues ask me if I have read any of his novels, I say only two things. One, I don't read fiction, at least not mostly: apart from a Joe Dunthorne and a Nick Hornby, most of my books are either autobiographies or pop culture histories or humorous essays. Two, you should ask my sister about John Green, because she has all of his novels - and she's been reading him before he even became a big deal here.

"John Green is jologs," I said to her, and she was this close to disowning me.

She wasn't alone, though. With her was, well, Rainy, my girlfriend. She was also this close to disowning me.

But they couldn't. They need someone to drive them home, or whatever's close to it.

We were at Fully Booked in Bonifacio High Street for a book signing. I, of course, have never been to these things. The closest I have to a book signing would be the things I see on TV: a polite line, single file, straight; the author, ruggedly handsome, asking for names, engaging in some vaguely flirty chit-chat and signing everything with a Sharpie. The author, however, isn't exactly Richard Castle: Ransom Riggs, the guy behind the terribly open-ended Mrs. Peregrine's Home for Peculiar Children, is tall and a bit lanky and quite a looker, judging from the few times I saw him, while browsing for books I may or may not buy, while Kim and Rainy waited a few floors down. Quite a looker, judging by how Rainy fawned over him after it was all over, hopefully because he is an author and she likes reading books, but partly because he is, well, cute. And I am her boyfriend. And we love trolling each other. 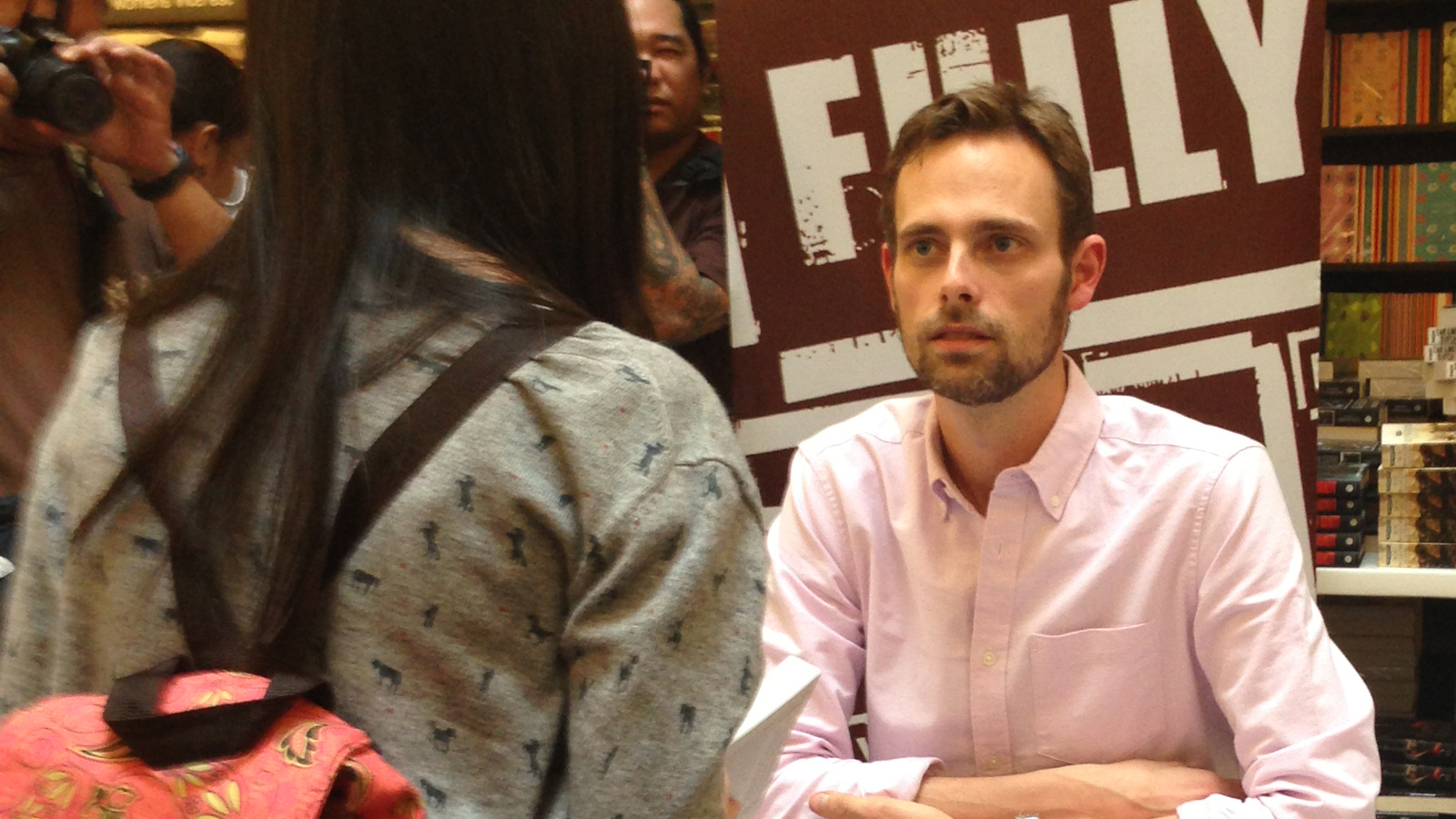 My sister and I were there as early as ten in the morning. I was just the driver, but I ended up being the guy who'd reserve a book signing slot for Rainy. She really wanted to come, but then she couldn't, but then she decided that she would even if it'd cost her money. "It only happens once," she told me, and two days later, I'm making conversation with a fan who also made reservations - three books, none of which are hardbound, because they ran out of stock. (To get in, you needed to buy a book at Fully Booked, although not necessarily on the event itself. At the very least you need a book with their price tag on. Kim originally bought her copy in Singapore; luckily she was also able to have that signed. Rainy lent her copy to a friend, who promptly lost it. Oh, the humanity.)

"Nagyo-YOLO siya," I told my sister, "pero bakit ako 'yung pumipila?" Rainy and I, we love trolling each other.

I was perhaps the only guy in that line. Of course, I'd learn that I wasn't the only one - there were at least two other guys in there, one of which decided he'd feel close to Rainy or something. I'm pretty sure there are men who also love reading books, but those stupid gender rules mean we can't be seen weeping over a novel, going gaga over a novel, although I have to say that's not why I don't read a lot of fiction. It's just one of those things I don't understand. Well, apart from the "men only browse photos" thing.

But I observed the crowd from the third floor (thus, that creepy-slash-awesome photo up there) and they were mostly girls, with glasses, preferably thick-rimmed, and oddly the same dress style. Or similar. Or I wasn't seeing clearly because of this little headache I got from trying to not buy so many books. If I screamed "John Green is jologs" to that crowd, I'd be lynched. (My sister found out about Ransom through John.) My sister wanted to ask Ransom about the book's lack of a conclusion, but she couldn't tell me about it while we were in line for fear she'd be lynched. Maybe, she said, people would think she didn't really read the book - something you do not accuse a literature major. 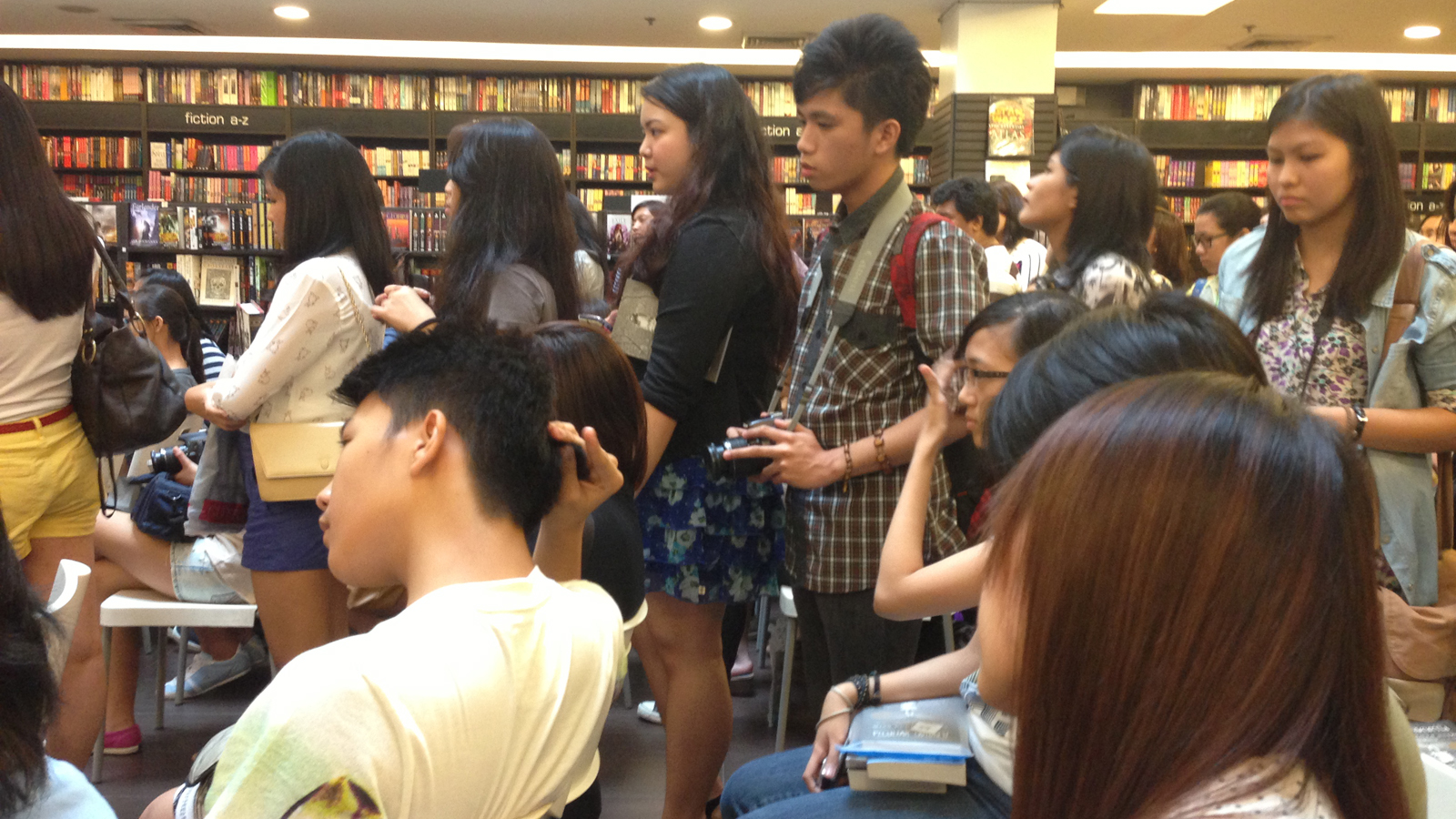 Rainy did get to ask that question during the book signing. The answer was, if I heard correctly, he wanted lots of space for a second book. So there is a second book. My sister and I had this pretty discussion in the car as we went home. I had her explain what the book is all about, and it felt rambly at first, but turns out that was the point. I was all, "so there really wasn't a conclusion?" not having read the book at all. "And you all went to his book signing on the basis of the setting? That's some gamble he took."

I think of how books form some sort of community. Some start shallow and choose their OTP. Some go deep and discuss plausibility and narrative structure. Some just start from there and run away with it, the paragraph as a stepping stone. Or form lynch mobs and attack anyone who says John Green is, well, you know what I'm doing here, right? Narrative structure.