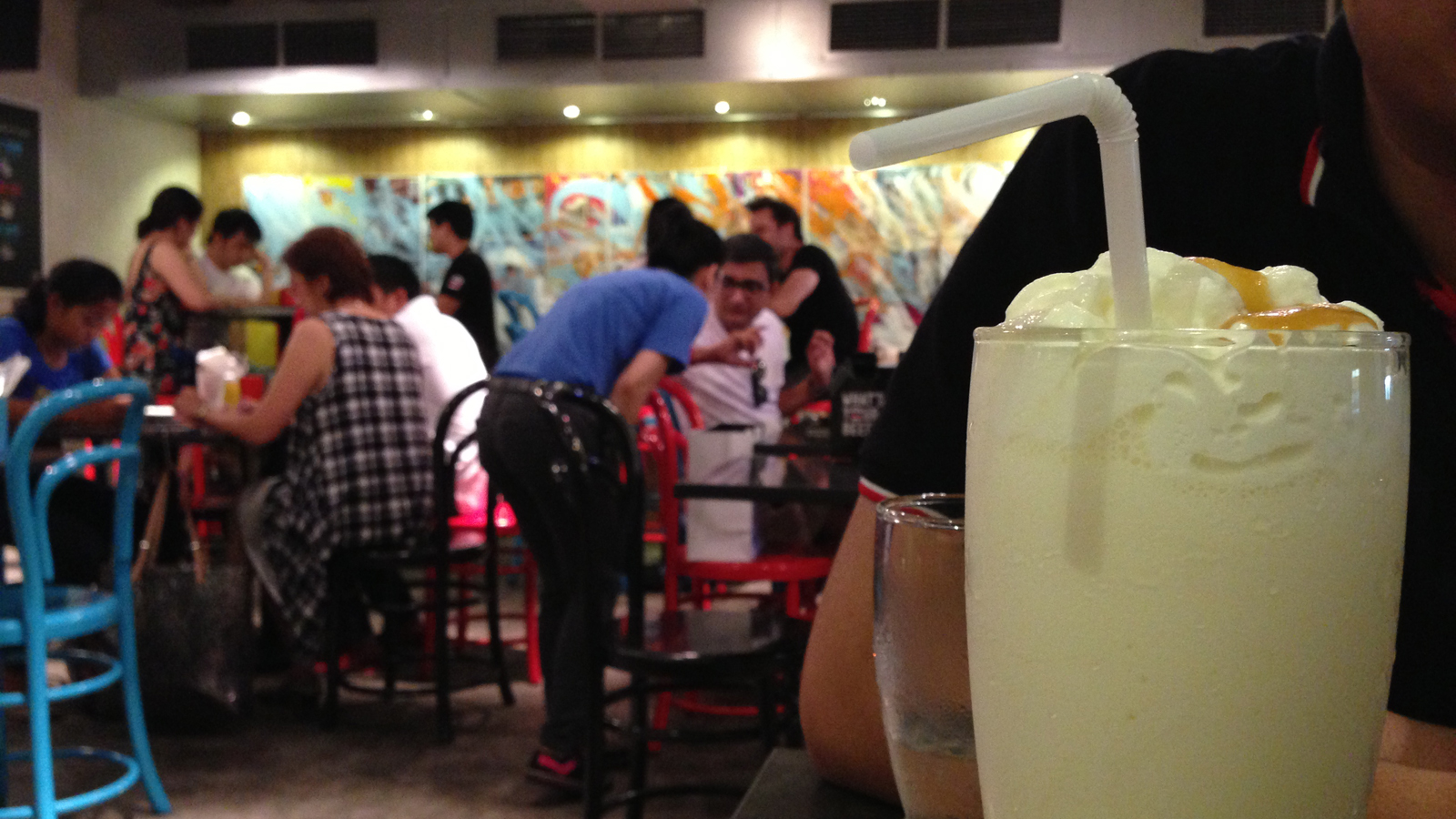 One of the best things about having a girlfriend is that you can use your dates as an excuse to eat in new places.

Sure, we both like to eat. I know that sounds bad, but really, what else do we do on dates? We've only been together for four months and we can't do everything yet. Sooner or later we'll be going on out of town trips (can I drive that far?) and maybe jump off buildings or something. No, I don't think I'll be doing that.

But Rainy and I, we've got a bit of an opposites attract thing going on. For starters, she's the spontaneous one and I'm the guy who plans everything out. I eat a lot, and she eats a little. On the night we first met, she barely finished half of her burger. But then again she's always on the lookout for sweets, and lately she's concerned that she's getting fat. Like me, then.

The other thing is her seemingly long list of allergies. I'm lucky I don't have that problem, although there was a time I assumed I was allergic to crab, and avoided eating them steamed for over a decade, until I went to Singapore and ended up getting both of a chili crab's claws. Rainy, on the other hand, can't eat crabs. She doesn't like vegetables, but she does eat them, and prefers squash. And she cannot - cannot - eat peanuts, or any kind of nuts for that matter, else she gets a nasty breakout. I've seen that happen first hand, during one of our lunches, and I swear she didn't eat nuts then.

"Minsan nga, bigyan mo ako ng listahan ng lahat ng allergies mo," I told her a few times. Twice, to be exact. I say this as a concerned boyfriend - she is my responsibility now, after all - and as a guy who doesn't want to eat a lot anymore. I'm trying to lose weight again. Nothing drastic. Just maintaining a sane, healthy belly, that's all. But when your girlfriend ends up buying a slice of turtle pie without realizing a layer has nuts, you have to help out. Thankfully I don't get any of those nasty breakouts, and my days of frequent asthma attacks are long gone.

So yes, an excuse to eat in new places. It, for one, makes me feel like I know my way around. We went to IHOP one day and found ourselves almost losing our slot in the line. A few weeks later we were trying out Chuck's Grub and discussing, of all things, fishes and my ADHD diagnosis. And yesterday, despite the fact that we just had breakfast and a doughnut each - from a surprisingly empty J.Co branch - we went to Burger Bar at Greenbelt.

Yep, we were talking about the competition to the restaurant we were in.

I am still, in Rainy's words, "traumatized" by my experience at Johnny Rockets. You know the drill. You've heard me blab about it before. One bland burger, one good milkshake, unlimited fries, all for P600. That's way too expensive for me. So we decided that we will judge Burger Bar in relation to Johnny Rockets, the absolute low point in burger joints.

One more best thing about having a girlfriend is that you have someone who'll go with your crazy ideas. I mean, I've had enough of my brother complaining when I dare have an opinion about the food I'm eating. "Critic ka na naman," he'd often say. Well, yes, and you have no tastes at all. But anyway.

Burger Bar is better than Johnny Rockets, but it all depends on your knowledge of what you're ordering. I had a Bar Burger, which had caramelized onions and watercress and prosciutto and, the best bit, their Big Game patty, a mix of hanger and brisket that has this lovely kick that doesn't overwhelm. I only had a single patty burger - didn't want to go broke; ended up broke anyway - and I quite enjoyed it.

The catch was, Rainy enjoyed it too, because her burger - a 4-Cheese Chuck, with, well, four cheeses, arugula and a patty made of chuck and short rib - underwhelmed her. Both of us, really. She thought it was bland, and the cheese, which should give it a kick, did nothing either. They call the patty the Beef Bomb, and yes, I get that it's beefy, but it gave Rainy a queasy feeling that she ended up downing with her salted caramel milkshake.

Well, at least she had the better beverage. I like myself a good root beer float but it doesn't look sexy. I know that sounds very selfish.

The ambience isn't much, and the burgers can be hit-or-miss depending on your tastes, but I paid a little over P900 for two burgers, a milkshake and a rootbeer float. And we enjoyed most of what we ordered. So that's got to be better than Johnny Rockets, right? Considering how we have decided to review burger joints, yes. More or less.

Next time we will go to Charlie's. If I could get her to go to Kapitolyo on foot. I smell a new couple thing.
And your responses...