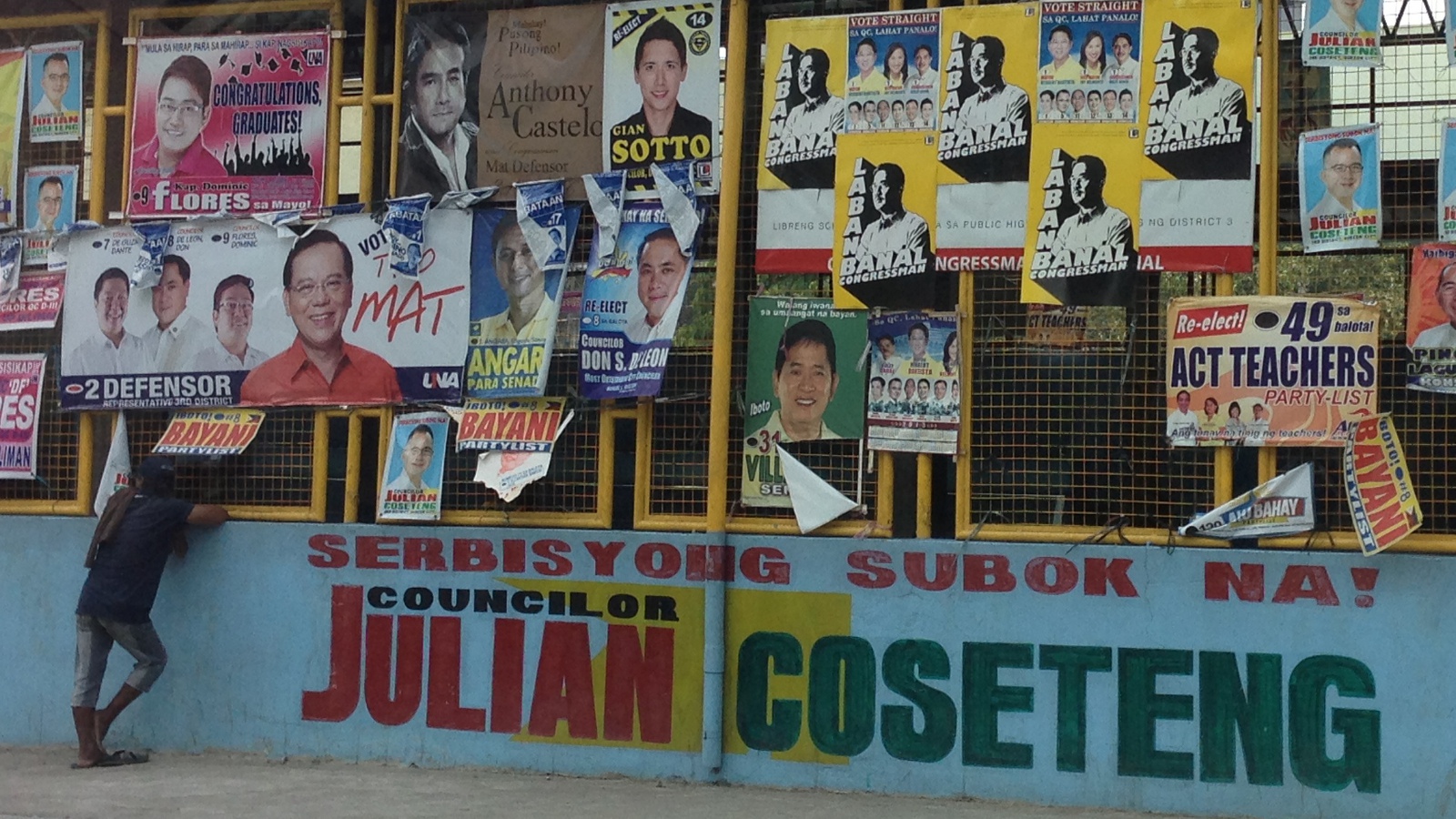 "If you don't vote, don't complain," some people say, and it's something I've never agreed with. For one, politicians get their salaries from taxes, and we all pay taxes regardless of voting age, thanks to a 12% VAT on pretty much everything - so when they dip their hands into the national coffers to give their mistress a boob job, we have the right to complain. Also, not a few people decided not to vote out of choice, believing none of the candidates really deserve to be in office. I don't know if there will be some sort of "abstain" option on the ballots come Monday, but I know of some people who will not vote at all. Or some would go to their precincts and shade all circles, rendering their ballots spoiled while making themselves heard. Hello, Carmel.

Me, I'm still voting, although me in 2010 compared to me in 2013 is completely different. I am more aware now - and I'm not talking about how many times I've blogged angrily, here, about stupid legislation and Noynoy Aquino's mere political existence. I may not be a fan of the president (understatement of the year) but I am still closely watching if he really can, uhh, rescue the Philippines from whatever it is that's bothering it. Whether you like it or not, we all have a stake in this thing, so you really can't help but go to your precinct and pitch in.

If only voting this year is an easy choice. Granted, it isn't as difficult as three years ago, but back then I was an eager first-time voter who tried my best to do an educated choice. Now I'm a second-time voter who hasn't read up a lot because, well, I have work to do. That, and the choices presented to me nowadays don't really appeal to me, so there's a part of me that goes, "why bother?"

Yeah, why bother? Because really, who knows? I'm not voting to see my favored contestant win. This is no American Idol, although the bit about producer manipulation might stand. Knowing that Gibo Teodoro had no chance of winning because of his mere association with Gloria Arroyo didn't deter me from voting for him. Anyway, so how do I vote this Monday? That, at least, I have a bit of an idea on.

I will vote for a candidate who I know has done something. I know, I know, I didn't do as much research as I should have. I'm not voting on the basis of soundbites, though - of grand statements and robotic (now there's a term for those who followed elections in La Salle) promises. If you're not a newcomer - if you're, say, a reelectionist, or one who's looking to move from the Lower House to the Upper House - your previous deeds will come up one way or another, whether it's a positive or negative, whether it's from one of your political ads (hello, Loren) or what you insist is "black propaganda" (oks ba, Jack?). I'd like to think I have an idea which of the hopefuls would do good on the job, because as much as they spin what we all see, the truth will somehow come out, or at least what's close to it. It's called gut feel.

I will vote for a candidate who is not what we all call a "trapo". It's a shame that we no longer have highly respected political elders, whatever that means. I mean, perhaps we're just more cynical. I mean, Johnny Enrile was that during the impeachment of Renato Corona, but then there was the "Christmas bonus" issue and suddenly he's the bad guy again. I don't think Ramon Mitra went through something like that when he was Speaker of the House - not that I'd know; everything just seemed more respectable back then - and I don't think the current speaker, Sonny Belmonte, would be showered with lavish veneration when he dies.

Anyway, I digress - and also, I'm not saying that they're all trapos. The impression is that trapos are those old faces who stay in position just for the sake of it. But then again, some of the older faces do deserve to stay on. (Ever wonder why nobody dares call Miriam Santiago a trapo? Okay, maybe you don't have to.) For me, trapos are those faces, old or new, who treat everything like an old man's club. Political arenas seen as one for the exclusive few, where merit gives way to patronage... in other words, Noynoy Aquino, with his "may I remind you, my parents are Ninoy and Cory Aquino, heroes of democracy!" stance, one that informs his every move.

I will vote for a candidate who isn't riding on his familial connections. Again, Noynoy Aquino. Or, in this case, Bam Aquino. I mean, he's all good when he did this Go Negosyo thing, but not when he's insisting about feeling betrayed by his former boss, Gloria Arroyo. "I felt betrayed." "I felt betrayed." "May I remind you, my uncle is Ninoy Aquino, and my aunt is Cory Aquino, and they're heroes of democracy!" Same goes for, I don't know, Nancy Binay. Am I bullying her? Perhaps, but really, we're all calling you out for not telling us why you deserve to win, apart from being the daughter of your father.

Since talk of finally issuing a law against political dynasties - one that will always stall no matter what happens - has spiked up, politicians seem to have taken an up-yours! approach by highlighting their familial connections. Like this one that James found in Malabon. Or this one that I found in Bayombong, Nueva Viscaya. Or the ones I see around my subdivision on a daily basis. Jolo Revilla is running for vice governor of Cavite, and his posters have his father, Bong Revilla, the senator with a proclivity for blue screens, behind him. He's up against Jay Lacson, the son of another senator Ping Lacson - you can't miss this; he's a ghosted figure in the background. Or, or, of course, Grace Poe! "Ang sinimulan ni FPJ, ipagpapatuloy ko." Which is what, exactly? He wasn't even elected. Cheated or otherwise, he wasn't even elected. But her posters still have FPJ's ghosted figure on the background, and "anak ni FPJ" stamped in front, and her ads have that song on the background. And we follow in droves, like swaybots on American Idol.

It's still hard to pick with those criteria in mind. And that's despite me conceding that I will not have a complete ballot come Monday. I mean, most of the candidates for senator are just there to warm seats and be lackeys (I trust you, Bam). The local candidates, on the other hand, do nothing to me, perhaps because I live in a gated subdivision and spend most of my waking hours outside of my home city, and, in my case, it's hard to be involved in Bacoor politics even if I try.

Also, elections are one of those few moments that you feel you can't fuck up, regardless of whether you're ill-informed or not. (I mean, that's subjective. You may think Nancy Binay is a worthless candidate, but somewhere in Makati an elderly woman will shade the circle next to her name because she wants her amiga in Caloocan to have the same benefits she has. It sounds stupid to you, but it doesn't to her.) So your principles come into play, and you put your heart into it, and you end up overanalyzing. UNA has some good faces but it's bogged down by the perception that it's headed by old people - Jojo Binay and Johnny Enrile and Erap Estrada, bastions of a past we all want to forget, but end up sticking with anyway. Team PNoy (ugh, that nickname still leaves a filthy feel on my fingers) portrays itself to be the savior of the nation but has had to deal with the devil to look good - not that I believed in this, but what the hell happened to "Villarroyo"? - and, during the campaign, they're pretty much acting like the trapos and bimpos ("batang isinubo ng magulang sa pulitika", so the term goes) they claim not to be. And sure, there are independent candidates, but you don't just vote for them because they're not affiliated with any party, right? That's a, uhh, that's a frosh mistake.

Unfortunately we're all trying to take these elections seriously - these elections being just a branch of the longest running variety show in the Philippines. You may say it's Eat Bulaga!, but not really. That show only gives money away during an hour-long segment. Here they give away money every single time. Fine, I'm being harsh about Philippine politics - there will always be people who try hard to make a change, sure, and some of them are fortunately running, and they definitely have my vote. But they're just players on a stage where everybody posts videos of themselves dancing "Gentleman" hoping to look cool. No matter what you do, you will be overwhelmed by whatever's gone viral, and everybody will do what they do, and you'll be pushed to the background. You want to change things, but in the end, your shaded circles are nothing compared to what the candidates will do when they assume their positions.

It's easy for us to blame the other voters - the people who were, as you say, stupid enough to vote for some newbie with a prominent last name - and maybe it's true. We won't get anywhere if we keep on bringing back the same old people. But then again, how can we go anywhere if all the powerful offer us are the same old people? Or maybe a rehash of those old people? I know, this argument gets me nowhere. I can't blame the voters entirely, nor can I blame the system entirely. It is a vicious cycle, one where family names rather than political beliefs are maintained as brands, one where aspiring legislators get to act like they'll save the world by giving out money even if it isn't their job. (Scrap the pork barrel. It makes everybody healthier.) Maybe I am just being cynical, but there really is no way to change this one bit. We are headed to a Senate that Noynoy controls like puppets, with an opposition that's lacking in backbone (or in Nancy Binay's case, any experience) and only out to further themselves (and their brand) in the political arena. Maybe I should do what Carmel would do - and shade all circles... but what did I think all of this up for? So I could have the right to complain?
And your responses...