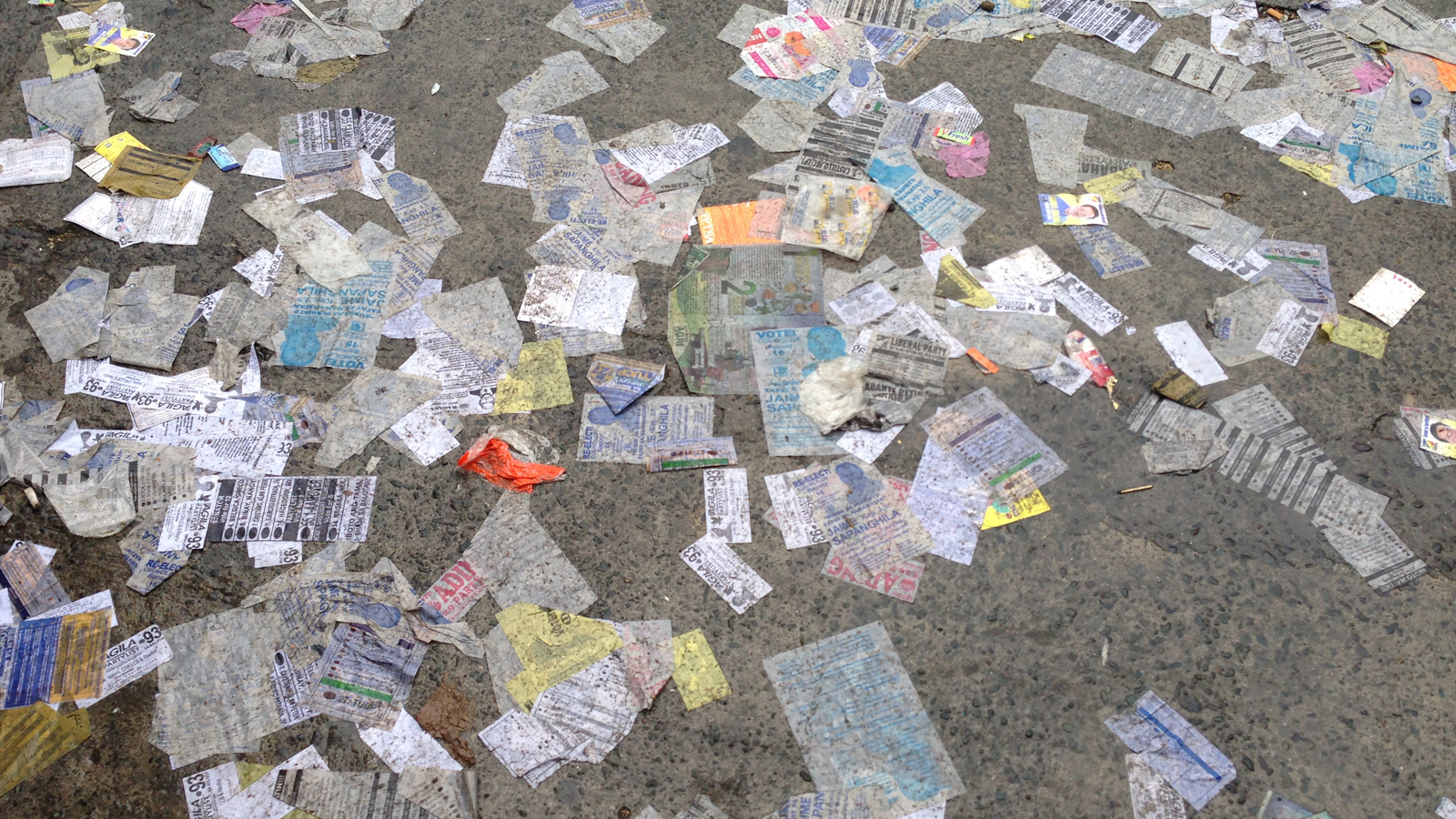 After today I am convinced that elementary schools don't make good voting precincts.

Or maybe it's just me. You see, I live in a populous barangay in a populous new city in what is, apparently, the province with the second largest number of voters. I am the product of, perhaps, a million new couples, from the latter half of the 1980s onwards, that settled down in one of many relatively cheap subdivisions south of Metro Manila, a bedroom community that's as disconnected to its own politics as it is connected to everybody else's.

The elementary school I was voting in, Molino Elementary School, reflects that rush down south. The expansions are seemingly haphazard, the pathways going up and down, the corridors going from comfortably wide to a claustrophobe's nightmare. Send tens of thousands of voters there for one day, and you have a really uncomfortable place to be in.

This year's elections is the second I'm participating in, and no matter how much you think you've prepared yourself for the onslaught that is the voting process, it still hits you. Granted, you can now find out which precinct you are assigned to ahead of time, but then you'll have to figure out where that precinct is, which means walking through seas of people, idealistic people, impatient people, intensely annoyed people. And illegal campaigners. And ice candy vendors. And I haven't factored in the possibility that you've been moved precincts, or worse, that you're not on the list at all, which is the case for some of the people around me.

I waited roughly an hour and a half to get inside the precinct and vote. The voting is the easy part, of course. Once the volunteers give you your ballot, you take all the time you need to shade the right circles, and then hope that the PCOS machine reads your ballot the first time you put it in. (Not in my case. But my ballot was only spit out once.) Then you get your finger stained with indelible ink, and you can go home.

The waiting? You stand under the intense heat. You wonder if the person beside you is planning to steal something off you. (I really shouldn't have taken photos for this blog entry, but I have to.) You wonder if the other voters are having as hard a time as you. (My father didn't have to fall in line, but then again, his precinct was full of, I guess, disillusioned voters who don't want to waste their time not being heard.) You wonder why all of you have to be squished together in one labyrinth of an educational facility, when others get to vote in airconditioned clubhouses. Yeah, sure, my parents couldn't afford to buy anything in Ayala Alabang when they got married, but we live in a relatively private subdivision anyway, with a covered basketball court (paid for by the mayor, so the story goes) and a public stadium (yes, a public stadium - imagine the chaos) within its gates. Why can't we go there and decongest? Why didn't I bring a cap? Why didn't I bring loose change for ice candy? Why am I taking photos?

"Totoong tao na?" she laughed. Seeing old friends in voting precincts makes things a little bearable. Me and my childhood friends, we all entered the voting list at the same time and ended up, perhaps, being clumped in the same precinct. This was the case three years ago, and this was the case today.

I also never brace myself for the things they might say, even if they always revolve around how tall I am (although Erik, another elementary classmate and now Gay's boyfriend, is taller - or could it be the hair?) and whether I still do the things I did when we were little children.

"Gumagawa ka pa ba ng diyaryo mo?" Gay asked again, referring to those sheets of bond paper that I'd fold in half and write things in... it's hard to explain again, so here's a link.

This year's elections is the second I'm participating in, and despite the many reasons for me to be deterred from voting, I still do. At the very least, it's a civic obligation. You want to make the country work, you do your part. Everybody tells you that your country's future is in your own hands, that one vote can make a difference, that your one vote might make the Philippines a better place than it is right now. You feel invincible, and you brave the elements and the crowds just so you could make a difference.

I walked out of the classroom a little before midday. It wasn't scorching hot outside anymore; it was, in fact, raining, and it will rain so hard that the front of our house will be flooded again. And I was hoping that my vote would be worth going through all that. Then you'd hear about that stand-off elsewhere in Bacoor, and the supporters of that supposedly beleaguered senator crying foul - "if authorities can harass the good senator, then what about us mere Caviteños?" Then you'd see your Twitter timeline filled with meaner and meaner jokes at the expense of Nancy Binay, from people who call everybody else who didn't vote the way they did as stupid. I realize I don't really know if my voice is being heard.
And your responses...