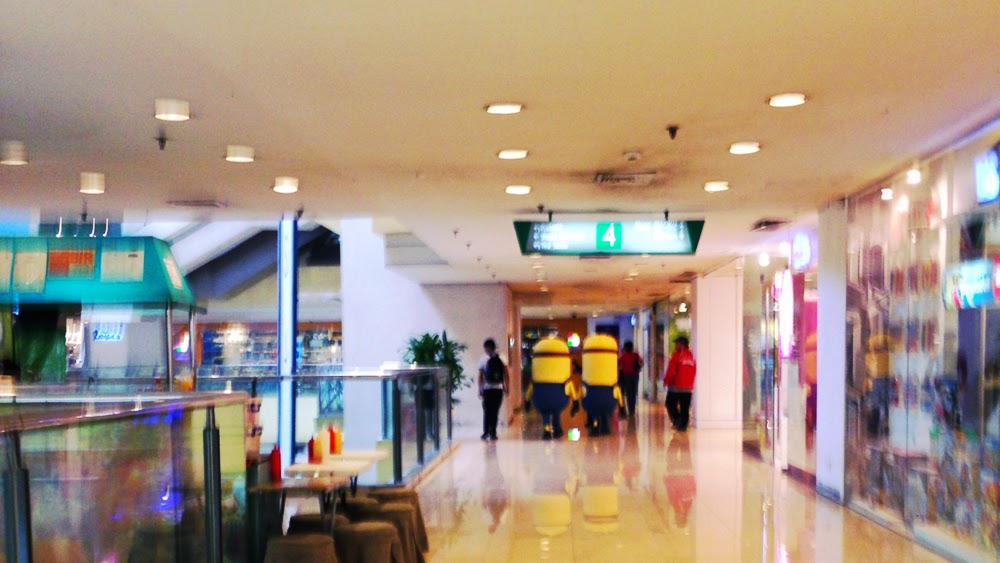 I haven't seen Despicable Me. That alone should explain why I scoff a bit when seemingly everybody talks about these yellow, pudgy, dorky, slightly dim-witted, possible genetically-modified creatures - hey, this is, uhh, Steve Carell's character we're talking about - they all call Minions.

Well, yeah, of course I have seen the trailer. I know about the Agnes girl extolling the fluffiness of a unicorn doll. But I never thought much of the banana-grabbing Minions. (Not Mr. Bananagrabber - that's something different.) Sure, the producers definitely designed them to become the breakout, easy-to-merchandise characters, much like Scrat in the Ice Age franchise was, but then again, I have not seen Despicable Me.

So maybe that means I should not, by any means, talk about how... well, I wasn't annoyed by how seemingly everybody talks about the Minions. I mean, they're posting trailers for the sequel, fine. And then McDonald's begins selling these toys and everybody my age comes out and buys them and collects all twelve and deprives little children of a chance to have these Happy Meals themselves. Nobody thinks of the children anymore! I have a friend, a mother, who's literally begging the heavens for a McDonald's branch that still has these toys in stock, because her daughter - I think she's four - never catches them whenever she drops by.

And you have these adults, these professionals, who gather up their money just before lunch break, head out to McDonald's, and hoard these toys. Then they'd take photos of them "interacting" and then post said photos online. "We need two more Minions!" They already have ten. "You buy next time!"

Then you'd see these same toys in different places. A friend has them on a bookshelf. Another has them in her handbag - yes, the handbag she brings every day to work. Another has them beside a computer. Reading law books. Doing a food porn-y photobomb. Running like crazy on your phones. (There's an app for that.) Definitely not taking over the world. Okay, I am not annoyed, exactly, because again, I haven't seen Despicable Me, and by the Law of Social Inclusivity (I made that up, I think) I will never understand how it feels to fall in love with a bumbling bald yellow thing and devote lots of time and love to it. (I know the angrier people have taken the image of a Minion and transformed it into this country's president, but I certainly did not intend to be political. But fine, whatever.) I will never understand how it feels to watch animated yellow blobs sing about their love for bananas. And thus, I do not have the right to feel... frustrated? Annoyed?

I'm not saying we're not supposed to be children again. I watch cartoons, still. Although not as much anymore, since I barely spend time in front of a television now, what with my brother hogging it with his sports analyses. I love Stitch. I love the aliens on Toy Story. I have shirts with both of them. But I don't know. There's something about how much space is devoted to the Minions that's off-putting. Or it's the way everything seems magnified to extremes nowadays - I am a culprit, if so...

The thing is, you can't help but be swept away by it anyway. Rainy talks about these things during dates and I have a puzzled look on my face - I am now portraying myself as a clueless geezer - and I just say that, no, I haven't seen Despicable Me, so I have absolutely no idea what she's talking about. But then, yesterday, while we were at a mall looking for birthday gifts for her younger brother, I spotted two Minion mascots make their way to the elevators.

"There," I said, pointing ahead of me.

She spots the Minions and literally, perhaps shamelessly, ran towards them. "Minions!" she said. "Miniooooons!" Well, she didn't exactly run, but more of waddled her way, like a duck, towards the elevator lobby, my phone in hand, trying to take photographs, and thinking she's missed them.

"Where?" she told me, not realizing that they're just behind her - at least until one of the mascots' handlers said that, yes, they're still there, and yes, she can have photographs with them. There were a couple of girls behind us - older than us; maybe in their early 30s? - who saw us spot the mascots, who definitely saw Rainy waddle her way across the corridor, and for some reason, got to have their photos taken first.

She did get her photo taken eventually - there wasn't a crowd; the mall just opened - but she was disappointed that she looked ugly in it. (I know she did, but then again, one of the Minions had that contorted face, so I thought she was imitating them. Ah, girls and their vanity.) But she was happy, and I was... a bit weirded out. Here I am, in the middle of the one thing I feel off about, the thing I shouldn't understand and yet feel something about. And suddenly I don't feel any more disturbed than I originally was.

That night, we talked on Facebook, and to impress her, I installed the Despicable Me chat stickers. Yes, they exist. I expect an onslaught of these in the coming days, and it probably wouldn't annoy me. But I fear for what will happen in a year and a half, when the Minions get their own movie...
And your responses...

honestly speaking, i think the minions are pretty overrated. yes, i'm going to go to hell for saying this but i don't find them interesting whatsoever. i kind of think they're lame and like the 'haha okay meh' kind of funny so yeah