7/11/2013
Netizen blasts ABS-CBN for getting tweet, name wrong
Rainy was the first to tell me of the huge fire that engulfed shanties behind Makati Medical Center. She lives nearby - she wasn't there at the time, though, and she isn't affected - and she was asking me if it was true. Only then did I start seeing reports of that fire - an explosion, then the flames, rolling outward and upward, ultimately affecting a thousand families, a fire that authorities struggled to kill, but thankfully was put down before it could get much worse.

"Ang laki ng apoy," I told my colleagues as I looked out of our office window in Ortigas. From there we could see a huge plume of smoke.

I was doing nothing that morning - I was just waiting to head out for some errands and a meeting at SMX - so I just monitored the events, did some typing, and monitored the events some more. Slowly the people on my timeline got angry, as somehow, in between all those citizen-submitted photos of the fire from different angles (it helps that it happened in Makati, home of tall glass buildings with similarly bored office people) there was this photo of a woman taking what everybody calls a selfie, with the fire in the background.

Ugh, yes, the angry people are out again.

I've written about it before. When someone makes a fool of themselves, and unfortunately did so in public, people will pounce on it. They will chastise said person for doing something so reprehensible. They will shout to the rooftops, saying that no, they will not do such thing, because it is reprehensible. Add all that to the echo chamber that is the Internet, and you have a rambling that could cause an earthquake.

So, yes, the girl who took the photo fumbled. But so did everybody else who hated on her for doing so.

Of course, I'm a guy almost constantly on Twitter. And I'm a pretty opinionated person - which explains why I have a blog, and why I cannot work for the government. But I only made a remark about the whole brouhaha when I got to SMX, around one in the afternoon. I posted two tweets, because I really can't squeeze everything in one. Then I tweeted a link to the aforementioned blog entry a couple of paragraphs ago. Then the meeting started. 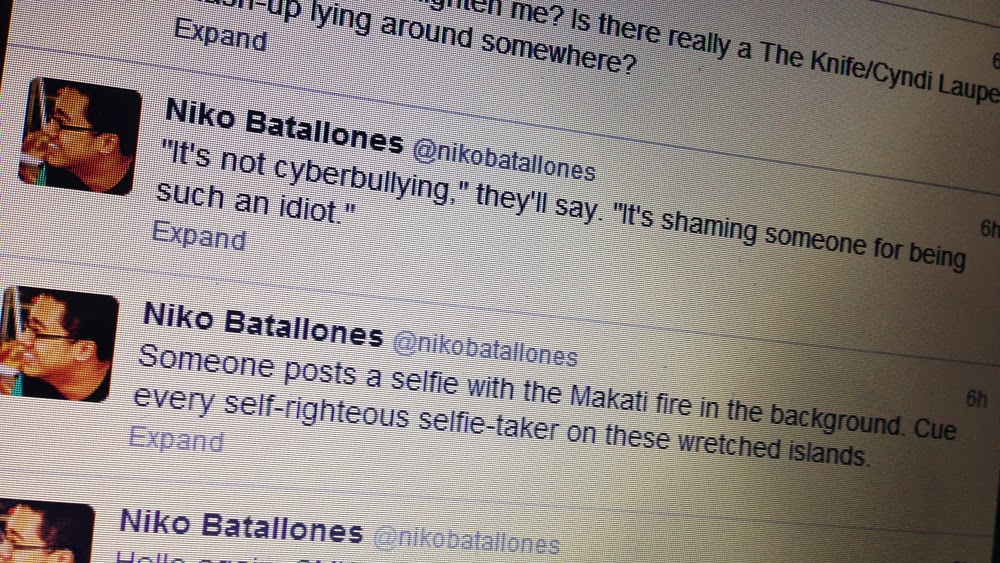 The fire, thankfully, was put out of control before the meeting started - but not after reaching Task Force Alpha.

I'm typing this from home. I'm home early - the meeting ended earlier than usual - and I'm just texting Rainy about, I don't remember, pigs, I think. Then my sister tweets me. "Have you seen this?" she asked, with a link to an article.

I wasn't gonna click on it, initially, because I thought my sister was trying to get me to react about a straightforward news article on the unfortunate photo. You know us, we can have deep conversations in the most unlikely of places - say, a rumination on what constitutes "hipster literature" on Viber. But then I realized something else might be up, so I clicked on it... and I found my tweet. They quoted my tweet.

And they got my name wrong. 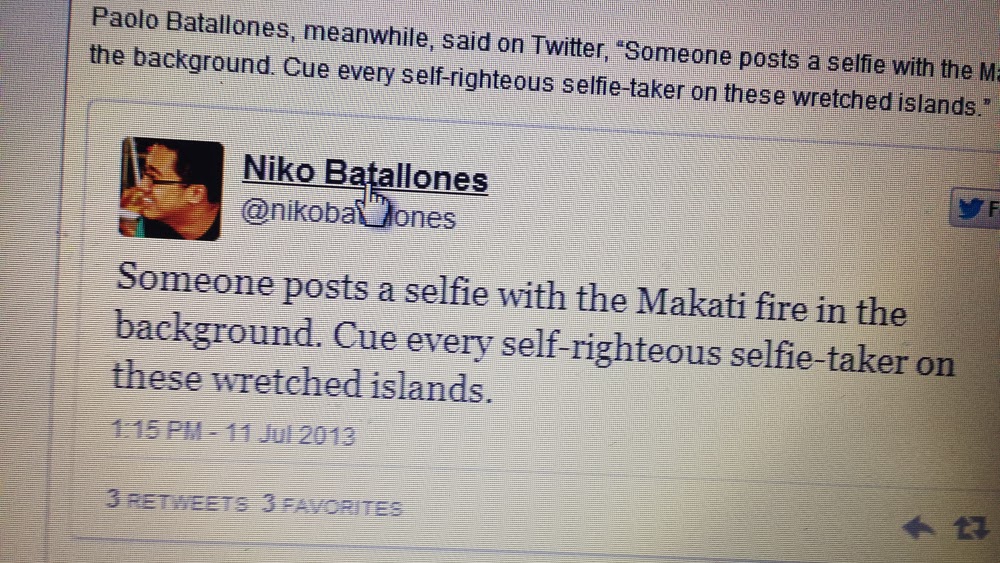 I've also written about it before. I hate it when people misspell my name, especially when they do it on Facebook, where they're posting a comment and the page clearly says "Niko" and they still insist on writing "Nico". But this one just takes the cake. My name, apparently, is Paolo. But they embedded my tweet. And it clearly says Niko.

"Writers thinking about the celebrity," Dexter suggested. Well, perhaps. Whoever was tasked with taking the pulse of the wired generation was probably thinking of Piolo Pascual. Okay, not Piolo Pascual. Maybe Paolo Bediones. It's not unthinkable, having these newsrooms monitor the competition. Maybe he was thinking of Paolo Ballesteros. That makes sense. Our surnames are pretty similar.

So, perhaps, a dazed writer confused our names when he saw my tweet, perhaps after searching for tweets with the words "Makati", "fire" and "selfie" - my tweet which wasn't gaining any traction, save for that ShutangInaBeks account, which, for some reason, marked it as a favorite - and decided, "well, it has the word 'wretched' on it, so it must be angry at the woman taking the selfie!" and added it into the article. Big words. Big, angry-sounding words.

Honestly, I don't even mind them quoting my tweet without asking me - it's ideal that they did, of course, but then again, my words are in the public domain now, so it's fair game. But of course, anyone who knows me knows that I'm more likely to be angry at the angry mob than the person they're targeting. Also, if they read my tweets - maybe if they saw the second tweet, which didn't have "Makati" or "fire" or "selfie" on it, and was therefore skipped - they'd know that I'm not saying what they suggested I'm saying. Was I criticizing how self-absorbed we can be? Perhaps, but it's not as simple as that. I wasn't aiming my sights at the girl; I was aiming my sights at everybody else.

Frankly, I don't mind being misinterpreted. We are on the Internet. Sure, things that go online last forever, but they'll be deep in obscurity at one point they might as well not exist. (Except for this one, because I am immortalizing it.) But then again, we are on the Internet. I know. I spent almost three years writing for an entertainment news website, and occasionally I rely on tweets to get me something. I know how being first means more than being right nowadays. I certainly remember banging my keyboards just to talk about Joanna Pacitti being disqualified from American Idol for being a ringer. (Side note: who remembered Felicia Barton before today?) It's a fight to be first to write about something, no matter whether what you're saying isn't exactly properly vetted and scrutinized or anything. It's about looking like you're on top of the story. It's about looking like you understand the side stories that make up the bigger story - which explains this focus on what we opinionated tweeters say, because yes, you're down with the kids, you get the Twitter thing, you will trend, you will definitely trend.

Is this what passes for journalism nowadays?
And your responses...