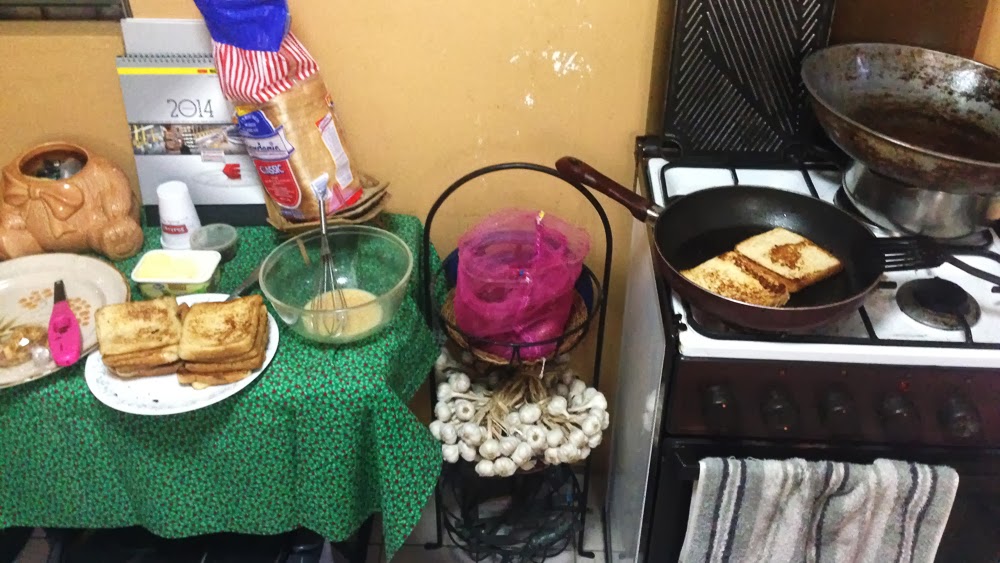 It's not that I still don't see the need for a work-life balance, the premise of which is already so scratched up it's starting to mean nothing. I just never really had the urge to, you know, drop everything and go on a vacation, like most of you do. Weeks of Facebook posts hyping up your stepping on a budget airline and flying to some Asian destination. "I deserve this!" becomes your mantra, and the closer you get to departure, the more torn I am. I want to throw a brick at your face so you'd stay here and suffer, but I also want you to leave, take that holiday, and maybe, never return. I mean, why not? You deserve it.

But I digress. I really just wasn't the type of guy who'd take a leave from work for no concrete reason. And up to now, "I just want to use my leaves while I can" was not a reason. But this year the company decided that unused leaves won't be convertible to cash, and with the discovery that I have not used even one day of vacation leave, out of the 15 I am entitled to per year, I decided that, well, I'll take a three-week leave, because, well, I deserve this!

The last time I was idle for this long was the two weeks between my last job and my current one, a time mostly spent getting used to my new-ish rhythm - I was working at home, after all; I will be taking public transport again - and complaining about things, and changing my blog's layout, and, well, getting my heart broken. This three-week break dovetails in nicely with the many Christmas-related national days-off, so at least I'll be busy with stuffing myself and trying to burn all those calories off. (I have resumed my morning walks because, well, there finally is a very compelling reason to listen to your alarm even if you really should be having a lie-in.) I also managed to renew my drivers' license, and I also plan to do some cleaning and, maybe, change this blog's layout again.

I'm a third of my way through my three-week holiday. I'll admit, I haven't really done much. Because damn it, it feels nice to not have to do anything, perhaps apart from your house chores, and your walking, and your license renewing. (I don't think that sounds right.) I think I spent a lot of my time in front of the computer, playing SimCity again. As much as this game vaguely threatened to tear me and Rainy apart, she still gave me the game's futuristic expansion pack as an anniversary-slash-Christmas gift, and now I'm knees-deep in giving my five-city (so far) region more wealthy people to keep ControlNet running. Also, one of my cities successfully transitioned from a coal-digging town to a TV-manufacturing one, because, well, coal is running out, and there's a lot to earn from making televisions.

Speaking of televisions, I have not yet caught up with some of my shows. I have finished that David Sedaris book that was given to me at the company Christmas party last year, though. I mean, it is Holidays on Ice. It is Christmas-themed. It only makes sense to read it during the holidays, or at least in between them.

One day my mother went home with a bag of pan de sal, from one of those stores that open early in the morning and get lots of queues, as if pan de sal is already a rarity here. I mean, yes, they got smaller and more expensive, but they're still not a rarity. But I don't mind. The ones sold from inside our village is quite delicious: crusty outside, fluffy inside, and just the right touch of yeast-y. But my mom bought bread from a different store, a couple of villages away - she ran an early morning errand and had a car - and it was, well, not that special. It felt a bit too starchy even when warm. Well, it wasn't really warm, for one.

I ate it anyway. Got a piece, opened it up, scooped a spoonful of Biscoff - I should take the opportunity to mention that speculoos is not a brand, but a type of cookie - anyway, scooped it, spread it, bit into it. And I thought, since nobody was likely to touch the bread, because nobody seemed to perk up with enthusiasm about it, what if I made French toast with it? French toast with cookie butter filling? Would that be too much?

For the past few weeks I've been watching old episodes of Alton Brown's Good Eats. (This is why I do not have time for Sherlock.) So there I was, watching a cooking show on what's left of my lunch break at work, trying not to get hungry again. Pumpkin pie. Bouillabaisse. Bread pudding. This was also the time when I was going to Christmas parties in hotels, so I was wishing I'd have the brilliant bread pudding at EDSA Shangri-La. It's an impossible dream because I wasn't going to be there at all.

Bread pudding, Alton said, is essentially custard and bread baked together. French toast, on the other hand, is essentially custard and bread fried together. I can't remember if Alton said that himself, but it is bread soaked in a mixture of egg and milk, and, well, I am being long-winded here, yes. The only difference is in the frying. And yeah, I suppose I can do it myself. And conveniently, Alton's bit on French toast is also on YouTube.

I've done it twice this week. The first try was a test run - not that I doubt my abilities to do French toast, because I have done it before. But I was getting used to it again. Now, I don't cook a lot. I did watch a lot of cooking shows, and I can find my way around a can of corned beef, but my dreams of being able to cook adobo are still, well, dreams. The day after Christmas I vowed that the best adobo I'll make will have roasted garlic - I mean, I drizzle a head with some oil, roast it on an open flame, then squeeze the cloves out and throw them into the mix - because I had adobo the day before and I swear I tasted something smoky in with the flaky pork. Rainy, on the other hand, has given me a small box of Graham balls (it's an experiment) and a similarly small box of pastillas (it's a failure, she claims). Not that I feel competitive or anything, but still, it's the sort of thing I should be doing on a break, right?

Also, admittedly, I did not expect to be doing French bread again, until my mother asked me to do some thing morning. By then I've gotten a few more things right.

Use a big bowl. The first time I used a small mixing bowl to whisk my batter together, and I ended up making only seven slices. (This is Gardenia bread, the ones stored in the fridge for past its expiration date. I can't buy those fancy breads on the Alton Brown video. At least not easily.) I ended up squishing the bread so it'd be evenly coated, and it just sucked up more of the mixture. On the second run, I did twice the number of slices, but it wasn't as dense, but that really depends on whether I want French toast or bread pudding.

Always have butter ready. You'll need a dab of butter for every batch of French toast you make. You will end up with a dry pan at the end of your first two slices, and you know how clingy eggs can be with hot pans.

Use nutmeg. I will forever thank Maica for tweeting about the wonders of nutmeg on spaghetti sauce. We tried it, and enjoyed it, but ultimately it meant another spice on the cupboard that I can use whenever I see fit. I am, after all, the guy who makes sunny side up eggs topped with pepper, garlic and dried basil. In other words, it's a surprise my breath isn't bad yet. Adding some honey to the mix is also good - and, turns out, orange blossom honey works very well with nutmeg.

Four slices into the second run, I felt pretty awesome. I have become an egg-dipping, bread-frying, butter-dabbing, French toast-making machine. I remove the finished slices from the pan and put it on my plate. I whisk the mixture again so the nutmeg doesn't settle. I soak one slice of bread and put it on the pan, followed by a bit of butter that I portioned just a few minutes ago. Then, another slice of bread, soaked and coated on both sides. And then, the wait for that elusive golden brown. That, I admit, I still have to work on.

So, yes, I am not yet a French toast monster. I did find myself settling into a rhythm, of dipping and frying and slicing and flipping, and I did feel like a robot. And then I thought of Neil, who's now working in the kitchens of one of the hotels near where I live. I bumped into him a few months back; he had a day off and was finishing a book (which he only had for a day, I think?) at Starbucks, and I had my earphones on, listening to the last SONA, and tweeting angrily about it. (Another reason why I don't file for leaves: sometimes I go on official duties outside of the office and end up going straight home. It's not cheating.) And we talked about how he works, about how he looks after at least two dishes at one shift - and I am pretty sure I got that figure wrong, because my memory has failed me - and about how the breakfast shift is the most nerve-wracking mostly because you're juggling things in the middle of the night.

I mean, I've watched enough cooking shows, specifically Top Chef, to know that, in the end, you'll get used to the shifts and you will be a lobster-cracking, beef-searing, sauce-making robot in a kitchen that's essentially a factory production floor. It feels nice being part of a unit. Neil is happy with his decision to enter cooking school and pursue a culinary career. But then again, that unit will not allow you to add nutmeg, not cookie butter, to your French toast to impress some people, like your parents.

Changing thoughts completely, I've yet to bring Rainy to a date at a hotel restaurant.
And your responses...

ME WANT FRENCH TOAST. Y U NO GIVE ME ONE!