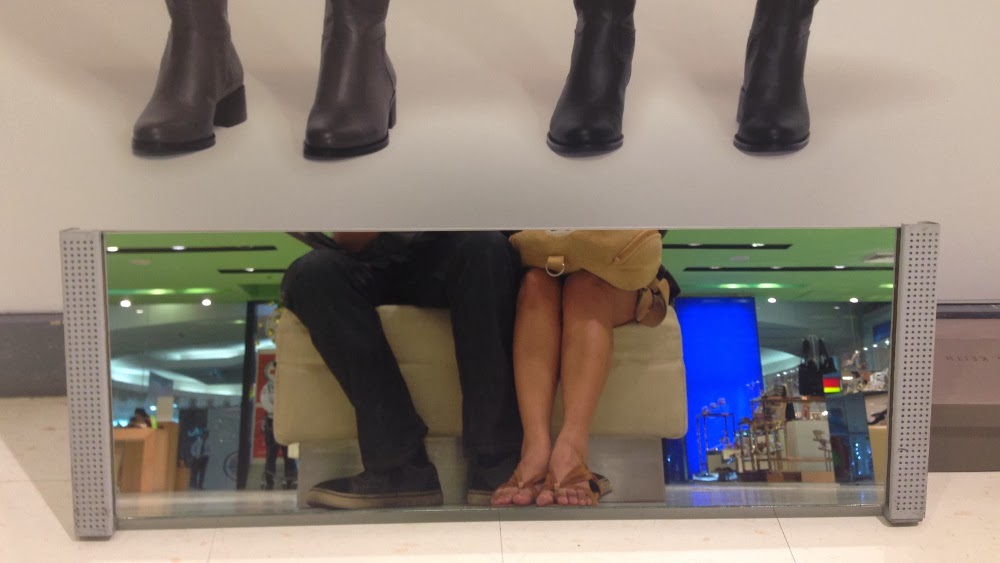 My only takeaway was my blooming contempt for wedding receptions. Well, not all of it. Sometimes the food is great. Oftentimes you get to learn more about the newlywed couple, mostly the sort of thing you never get told about, because it's too awkward or it's too obvious. I was seated in my table, hoping to have more of the delicious mango pudding, when I heard the host, once again, ask the newlyweds to kiss in front of their family and friends.

"Can our newlyweds exchange another kiss? Pwede ba?"

Really? I mean, it all feels so, you know, weird. A wedding is a celebration of love between two people, and those two people are being treated as entertainment. Hey, look, these two just got hitched! Ten bucks to see them on their honeymoon. It's inescapable if you're William and Kate, or Freddie and that teenaged girl. Whether you like them or not, a part of you still wants to see them go through the motions, like you're demanding that they prove their love for each other is real. Err, maybe except for Freddie.

But then again, I have all but given up on love. Well, on finding love. Evidently I still believe in it. I just proved it a paragraph earlier. A wedding is a celebration of love between two people. Ultimately you root for those two people. You hope that the promises they exchanged to each other, in front of the priest, of God (or the mayor, but they're interchangeable, aren't they?) and most importantly, you, the spectator, the guy who bought a new outfit and put on extra-noticeable perfume for the event - you hope the promises they made in front of you are kept. Well, again, maybe except for Freddie. But I'm not saying that.

But you also know that not everybody gets to make that promise, and as I sat there, trying to find a pew where the wind flows better, and reaffirming to myself that I will never get married, I was thinking of the year ahead. I had it all planned out. In 2013, I would save enough money to go to Sydney. I would save enough money to go there for a week. Fly a decent airline, stay in a decent hotel, have some decent food, maybe see some decent, non-confrontational kangaroos. I'd take photographs, but no photos of myself. I'd meet Lau, and together we'd go to Ultimo and, you know, stand around, wait around.

In 2014, hopefully, I would have enough money to go to London. That is a far out dream, for sure, because the costs aren't just double. But then again, where else would I spend my money? After bills, food and whatever else strikes my fancy - and, yes, savings - I still have a lot left. Figures I might as well reward myself for being so painstakingly boring and unremarkable and unappealing, right?

Evidently I was too caught up with my travel fantasies, so much so that I did not realize what exactly I was doing.

Rainy and I have been going out for a couple of weeks by then. She went to my blog six months prior, and we slowly began talking more and more, especially when she got her first office job and I, major show-off, decided I'd help her out with the transition. That led to a couple of breakfasts at one of the many McDonald's stores along Ayala Avenue, which led to her helping me out with my Christmas shopping, which led to some typically off-the-cuff jokes about waiting five months before I court her, because obviously I was not going to do that, ever.

"I thought you'd react adversely to my suggestion. So you are mine! Aha!"

"No! I really was just surprised!"

"No! Akala ko nga magba-blah-blah ka. But now I'm inclined to ask 'you really are mine?' No blah-blahs!"

I was heading home from the wedding, news of Pacquiao's knockout defeat still on the radio hours after the fact was known. The food, save for the mango pudding, was disappointing.

Rainy is a nice girl. She's smart and fun and just has a little hint of the crazies. But that likely is an understatement. By then we've met up seven times in two weeks. It's partly down to coincidence, how I often found myself in Makati most of those days, but it's mostly down to how comfortable I felt with her. This is a person I only met through my blog. This is a person I'm joking with about, well, courting her in five months.

"What if I ask you the same question?"

"What do you expect me to answer?"

"Uhh, I'm not expecting whatever answer."

"Okay, change gears. Suppose I say yes to your question. What about my question?"

I was in Manila by then, hurtling towards the home stretch, my phone having some signal issues. She was in Manila, particularly in Quiapo, in some coffee shop, with this kid, who she likely doesn't know.

I always found her pretty. Sure, yes, sure, that's perhaps one motivation when I began talking to her. But then again, I have all but given up on finding love. I was not expecting her to be my girlfriend. Not after looking foolish in front of my last crush in college. Not after blowing it on my last crush at work. Not after that coffee shop encounter. Definitely not after that. I've long - long before these - I've long told myself that this isn't meant for me. I was absolutely convinced that I'll grow old single, well-traveled, taking care of my parents, inheriting the home I've grown up in. I'll be happy materially, perhaps, and yes, sure, there will be times when I look at the younger people and feel terrible about myself, and I'll think of the what-ifs - I would have done this hundreds of time by then - and then convince myself that what I have is a good thing. I went to Sydney. Stood around in Ultimo. Shopped at Rough Trade. Got frustrated at the expensive prices in Copenhagen. Met the Naked Cowboy in Times Square. And I write about these experiences for a living now. I have books and the respect of my peers. Or maybe not that, because I'll overthink it and believe that they just want something from me. But it's better than being lonely because you wanted something you definitely were never meant to get, right?

"You feeling awkward? Let's just forget about the convo."

"The running away with it thing that I do."

"I thought I'd get an answer."

"If you ever get one then what would it mean? I mean, I do have an answer, but I'm trying to analyze you."

"It just means we're equal. We both have answers."

It's been a year since that exchange. It's been a crazy year. By all means, that was not a way to get into a relationship. We had the five month thing. I'd do some chores for her family and maybe, in some heavily-foreshadowed moment, she would say that, yes, I do have her, and yes, I succeeded. But I never really thought that was the way to go. You don't go in on someone you like and force her to like you back. All this was is a little nudge, and yes, I had to spend two weeks to grapple with the reality that, oh my, I am, more or less, in a relationship! But yeah, sure, I admit, in reality she was the one who pursued me, and for some reason that worked. That little nudge led to a complete turn-around.

For one, I look forward to spending the rest of my life with her. Ideally, when we promise to do just that, there wouldn't be a host that would ask us to kiss ("on the lips!") every time a godparent finishes his awkward, already redundant speech on how he wishes the best for us. (Please tell me you don't do these things when you host weddings, Ariane.) There might be a paradox there. I don't like the idea of us kissing being entertainment for everybody who happens to be there. But I love her so much, and when we do get to meet I can't help but want to kiss her in escalators. I know, I complained about this thing. But then again, what do I know? And also, am I not allowed to change my mind? And also, I love her, even if things have not always been ideal, even if patchy phone signals led me to be this close to a break-up, even if we promised, many moons before, that we will make up when we fight, and that we will be together until, well, until the end. Here it is: a chance both to prove myself wrong and right at the same time - a chance to show me off as a hypocrite, as an anti-romantic who's only looking for love; a chance to be the guy who takes care of someone; and neither feels like a grudging obligation.

I've always been the guy who wants to get things right the first time. Sure, I want to get this thing right the first time. I honestly don't think I could handle the fact that I'll fumble the one (and only) chance I'll be in a relationship. But I don't care if I get it wrong along the way. Things, again, have not always been ideal. It still isn't. But it's nice knowing that, somehow, somewhere, there's this one person who's dealing with these things with you. You are not alone. You may still feel alone most of the time, when you see your peers get it right the first time, but you are not alone.

At the very least I will have someone to travel with, perhaps not someone to go to Ultimo with. To Hong Kong and retrace the steps to her fifteen minutes of newsy fame. To Cairo and make the most of post-revolution Egyptian cuisine. To Tokyo and find some place that's all Rilakkuma all the time. To Singapore, for shelves from Ikea, for that condo unit we occasionally daydream about. I may not look like it, but I finally have something to look forward to.

But yeah, I still have to pinch myself. I actually have someone, and someone actually has me.

Happy first, hun. I know I shouldn't do this, because, you know, the entertainment angle, and this is the moment before the climax we all see coming from miles away - but I love you, and I promise that I always will. Here's to where forever takes us.
And your responses...

Aw, you two are so sweet. Last long guys and hope y'all are really happy :-) Sincerely, Anonymous reader of both of your blogs