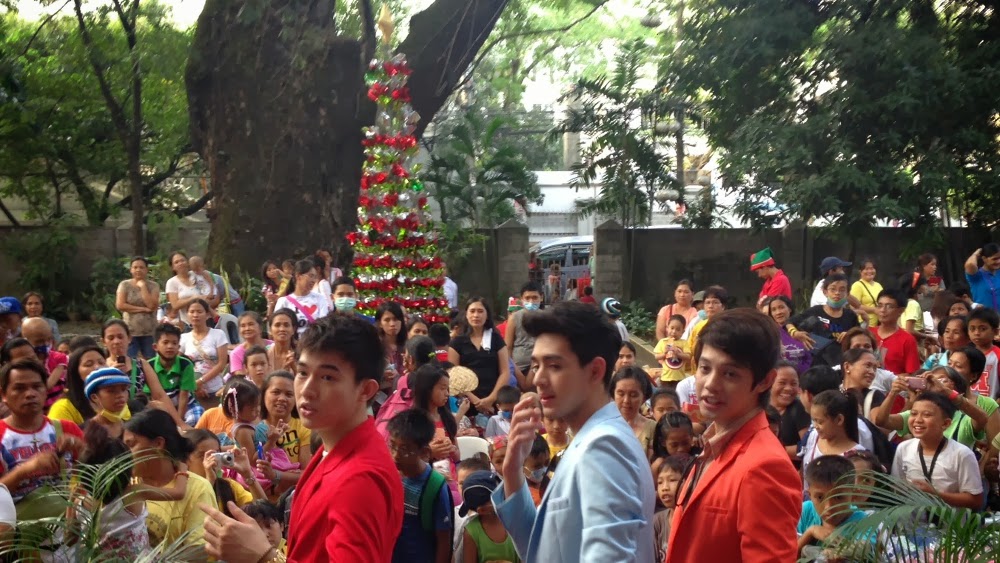 I was clutching two big plastic bags filled with stuffed toys. Dogs, three kinds - one black, one brown, one cream, vaguely - each clutching in their mouths a Christmas ornament of sort. One had a wreath, another had a candy cane, and yet another had mistletoe, I think.

The inside of the building was, surprisingly, dark. I mean, I shouldn't be surprised that it is. It is, after all, the Philippine General Hospital. A government hospital. You've all heard stories of how underfunded our public hospitals are.

But a part of me expected this particular building to be different, if only because of all the mileage it's getting. I was bringing stuffed toys to the Cancer Institute, particularly to the kids who go there every week for treatment - the very kids I've seen a few times on television, always an inspiring story of courage amidst the odds. And the Cancer Institute is, to me, a depressing place to be.

You wouldn't see it in the kids, however. They, along with their mothers, were gathered outside the building's façade, a closed driveway with a couple of big trees. It was their annual Christmas party, organized by a woman who my dad happened to know from high school - not that they were close friends then, but you learn things about familiar-faced strangers when you attend high school reunions and become an active member of the alumni, after all.

Annie has been doing this for ten years now. Every week, usually on Thursdays, she would visit the PGH Cancer Institute and talk to the kids, talk to the mothers, ask them how they are. Eventually there would be storytelling sessions, some gifts, and lunch, always from the Jollibee branch nearby, because they don't want to risk the already fragile children being affected by food turned bad. And every year, a couple of weeks before Christmas, they would throw a big party, with activity booths and a bunch of D-list celebrities singing.

I didn't know any of those who were singing. I just found it a little bit shambolic, for lack of a better term. I know their intentions are sincere, perhaps coupled with the wish that karma would catapult them to, maybe, an inevitably short-lived variety show on one of the less-watched television networks. But there they are, wearing flashy outfits and singing Christmas carols and dancing while the sound system would fail. It all just seemed, well, shambolic, at least to me. The weirder part was this one boy band (of sorts) that, for some reason, managed to bring ten or so gay groupies, shrieking when they danced.

The only celebrity that I did know - Alden Richards, a kapuso - would not be able to make it; he did call Annie, and the microphone was pointed at her mobile so everybody would hear him. Not that it's a problem. The mothers enjoy it. The kids, clearly, do. They would, of course, take what they can get, because it's something good compared to the treatment they would go through every week.

I played with this kid, a little boy, around two years old. He wanted the cream-colored stuffed dog, but I couldn't give it to him yet, because all the gifts would have to be given at the end of the program. (My dad sponsored an ice cream cart; the sorbetero, as it turns out, is already a regular in these things. The stuffed toys were donated by some of his friends.) Save for the extra pinky finger in one of his hands - I'm sure it's not connected to his condition - he was just like the kids you'd usually play with: a smile on his face, and a determination to have his way. He wanted the toy and, at one point, was angry at me because he couldn't have it yet. And suddenly play time was interrupted, as a nurse came out and looked for him. It's time for his treatment.

His mother seems a bit unfazed by all this. By now, the routine is very familiar to her. They have to get to the Cancer Institute early on Thursday or Friday morning, and fall in line. The treatment, she says, is free: the medicines, however, depends. If your child has leukemia, somebody's got that sponsored; otherwise, you have to buy the medicine yourself, and at around P3,000 a pop, it is a burden.

Some would travel a long distance just to get to the PGH on time. One patient lived in a particularly far-flung town in Rizal; she and her mother would wake up very early just to catch a bus to Manila, carrying their supplies for the day and the girl's medicine. They'd only be able to go home at around six in the evening, maybe seven. Another long bus ride to Teresa.

Inevitably, all the mothers would form a close bond. "Ilang chemo na lang anak mo?" is always the first question one asks another, and when that's done with, they gossip about, well, whatever. The scene at the front grounds, while the children listened to a particularly animated story teller, and the mothers chatted about which stubs are for which carts, was jovial - a complete contrast to what's inside the Cancer Institute itself.

So, yes, it is dark, but there's a courtyard in the middle, with a solitary swing set and a couple of concrete benches, so the hallways are awash with daylight, at least when the sun is up. The lobby, however, is dark and dreary. The walls are high and dirty. There's one small clock hung on one of them, and it isn't working. There's only one fluorescent tube lamp lighting the whole place, and it just makes everything look extra forbidding.

I hope the clinics and the treatment rooms look better. But as I can't just go there - at least eight of the patients that day couldn't join the party because they were in isolation - I just stepped back outside, to the front yard, where three boys dressed in outrageous suits sang a song, unable to do decent harmonies because they all had to share one microphone.

I made sure the boy got the stuffed toy he wanted.

One kid got a bit more attention that day. Her name is Erika, and she finished her last chemotherapy session that day. Annie made a personal appeal over the microphone. "Kung pwede lang po, mapauwi na po natin si Erika sa probinsya nila, sa Palawan," she said. They managed to raise P24,000 for the little girl.

Erika is a familiar face to me. The Christmas party with the stuffed toys, it wasn't my first encounter with these kids from the Cancer Institute. Almost two years before - I was just new in my current job - I accompanied my dad to this event held by another friend of his, at Sangley Point in Cavite City. Around sixteen cancer patients were given the chance to ride one of the Air Force's aircraft - just off the runway, a couple of rounds above the Manila Bay, and then back. Ericka was one of those kids. I was glad she was finally able to go home, after at least two years of chemotherapy sessions, and staying with her aunt, and being away from all of her family and friends.

Well, it's not as if she hasn't made new friends, formed a new family, while she was undergoing treatment at the PGH. And the bond these people form with each other - the children, the mothers, those who help out - is undeniable. But then again, I'm a half-empty kind of person, and my mind still wanders to the dark lobby of the Cancer Institute. It's still not a fun place to be in. It's a reminder of what could have been, and when the sessions end and the doctors give the all clear, you can escape the dark and become a kid again.

"Ayokong sabihing 'see you next year,'" my dad would tell one of the mothers before we went home. "Gusto ko next year magaling na ang anak mo."

Today we learned that Erika has passed away. Chemotherapy's ugly head had reared itself; the good cells were killed alongside the bad ones, and when she was struck with measles, she was defenseless. "I'm very, very down," Annie told my dad. "I never felt like this for the past ten years of dealing with them."
And your responses...