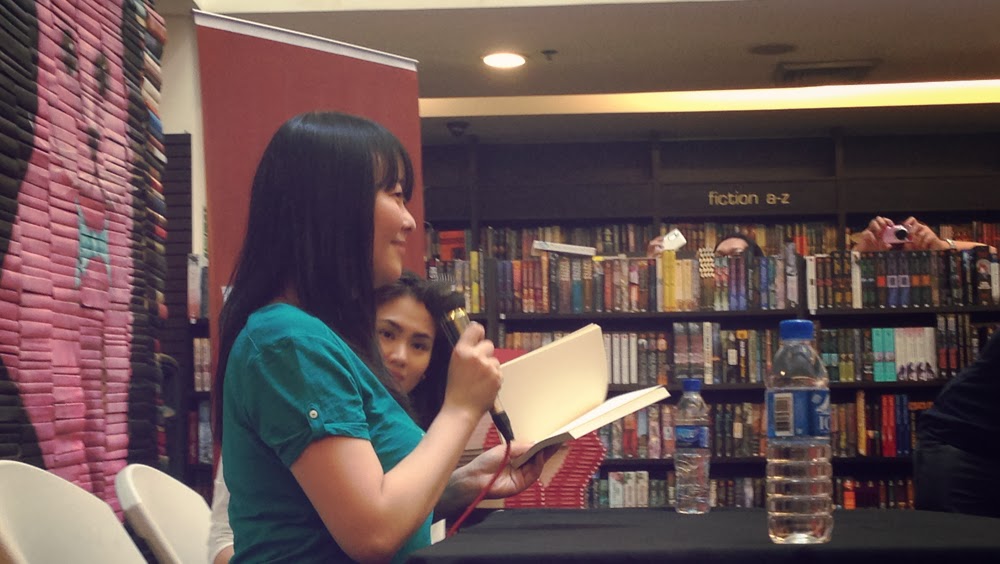 Writers are a very subjective thing. Sure, there are constants when it comes to, say, how the words go together and how the narrative builds up to a satisfying conclusion, but in the end, one person's trash is another person's "definitive wordsmith of our time". I mean, John Green will always be crap to me - possibly an ill-informed, hater-y opinion, if any - but there will always be someone - or, unfortunately in my case, many people - who see him as the man who has given their life meaning. But that's another story.

There are two moments from this afternoon's Lang Leav book signing when I realized that. The first is when the event's host correctly pointed out that, at the end of each poem she reads, there is a loud, collective sigh from the audience, a sigh that both suggests entrancement and exhaustion, at least the emotional kind. The moment she finished her sixth poem - they're mostly short, simple, broad in its scope yet surprisingly piercing in how it evokes particular things - everyone at the Fully Booked lobby seemed to take the cue and start breathing again.

The second moment was before the event itself. It was a quarter past one and the chairs have yet to be set up. Some fans were already milling around the lobby, hoping to get good seats. The organizers were surprised that the crowd was big - a line started forming at eight in the morning; Rainy was already the 63rd in line; there were still people outside an hour after registration started - and there were more people watching from the upper floors than, say, the Ransom Riggs event last year.

Fifteen minutes later, the seats were prepared, but nobody was being allowed to take a seat yet. I was, like last time, browsing at the shelves nearby, with Rainy's friend Ellia, who just wanted a glimpse of one of her favorite poets. We barely started talking when we heard a sudden crash, like a tower of books just collapsed. Turns out it was Lang's fans, getting seats like it was a game of Trip to Jerusalem. Rainy, thankfully, got a good seat in the front row. 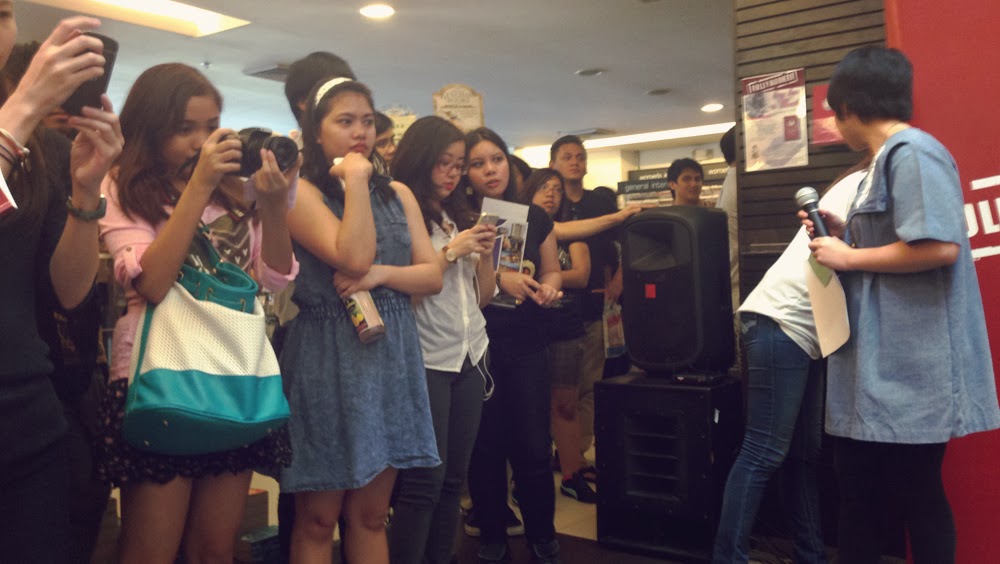 I've not heard of Lang Leav until her event. Rainy, of course, would know her, as aspiring poets who spend a lot of time on the Internet do. She does poetry and artwork too - that's how she met Michael Faudet, her current partner, and the reason, she says, why her book of poems is called Love and Misadventure. ("Also," she said. "It stands for Lang and Michael. L, M." Their story - he bought artwork from her; they started talking; the rest is history - she considers it her greatest romantic adventure. So, yes, she does fit Rainy's romantic side, too.) She posts a lot of her poetry online, which explains why Rainy was already familiar with some of the verses on the book. Also explains why the poetry reading had the sort of radio request show vibe, with fans asking her to read this poem or that poem - Sundays with Michael, for instance, a relatively long set about their first time apart, as my girlfriend requested.

The whole social media thing means she's captured a lot more imaginations than you'd expect - an audience of people looking for that one outlet that expresses their frustrations and tells them that, well, things will turn out fine in the end. Lang is a romantic. That explains all the sighs. That explains the large crowd. Just today, she signed 800 books. The crowd just never thinned out, even after the ninety minutes Rainy and I spent at the coffee shop after having her book signed.

Lang, at least from the few poems that I've read and the answers she gave during the Q&A, also wears her heart on her sleeve. Well, that does tie in with the romantic thing. She seems the sort who lives her life by the day. When she was being introduced, she was a bit giggly, seemingly overwhelmed - well, who wouldn't? - at just how many had turned up. I was standing beside her, and I didn't realize I was standing beside her until I thought that the only person who would get giddy because of an opening spiel would be the subject of said spiel.

"That is a pretty long introduction, huh?" I told her.

"Yeah," she said, still giggling, but not so, as she was going to take her place in half a minute's time.

Ellia didn't realize the person she just wanted a glimpse of was right in front of her. She didn't quite get over it, I think, throughout the rest of her stay in the bookstore. 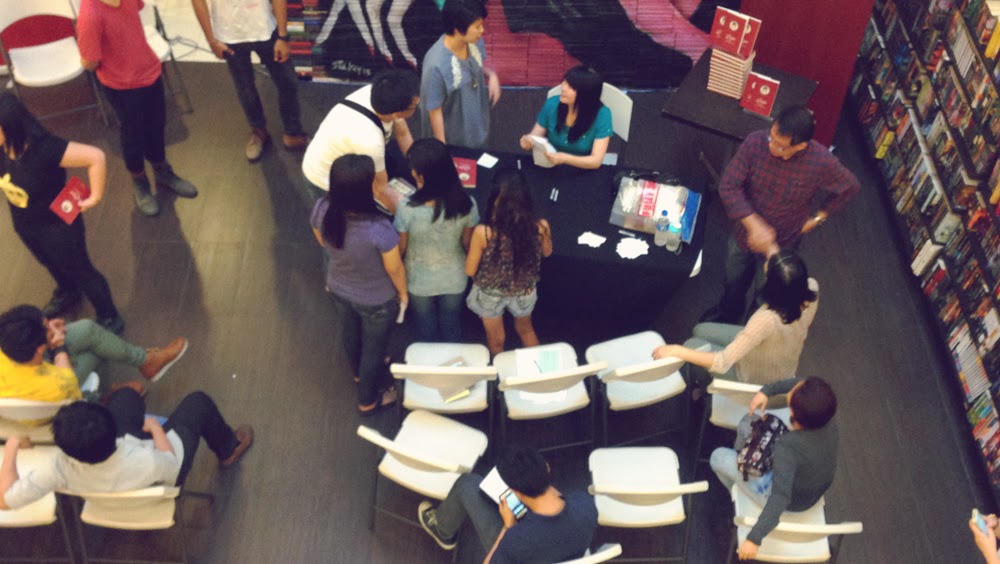 For a moment, Rainy and I felt terrible for Lang. I was almost five in the afternoon and she still isn't done signing books. Granted, the lines finally thinned, but there were still some last-minute shoppers who, probably, maybe, impulsively bought the book just because they can have it signed. But she was still all smiles, constantly saying "thank you very much" - Rainy had lost count - and, occasionally, hugging those in line.

"It must be hard to be in her position," Rainy said, or at least something like it. "You can't complain, or else you will look rude."

Being a writer is a thankless task. You're mostly invisible. You'll definitely be misinterpreted. There will be someone out there who thinks you're crap, and will insist that you're crap, despite the fact that a sizable majority love you. (Or maybe not a sizable majority. I don't know.) So you, well, you take what you can get, and make the most of it. Here's someone who's clearly in love; the whole thing shines through everything she does. Her poetry, sparse and intimate, cutting through what turned out to be at least two hundred people when I was there. And she will do it all over again tomorrow, to what I assume is a smaller crowd at Alabang, and only because the place is smaller. I hope she's ready for it.

Well, I think she is. She easily opened up about her life during the Q&A.  The whole thing didn't strike me as an obvious promotional tour thing. Sure, it was rushed, because there was reason to rush, but still, not very rigid. Or maybe it's the source material. I won't quite understand myself.

As for me, well, I'll just feel a little smug at the fact that Ellia standing right behind Lang didn't quite click with her until it was too late. And Rainy, well, she surprisingly didn't hug Lang. And how come, she said, I shook her hand? 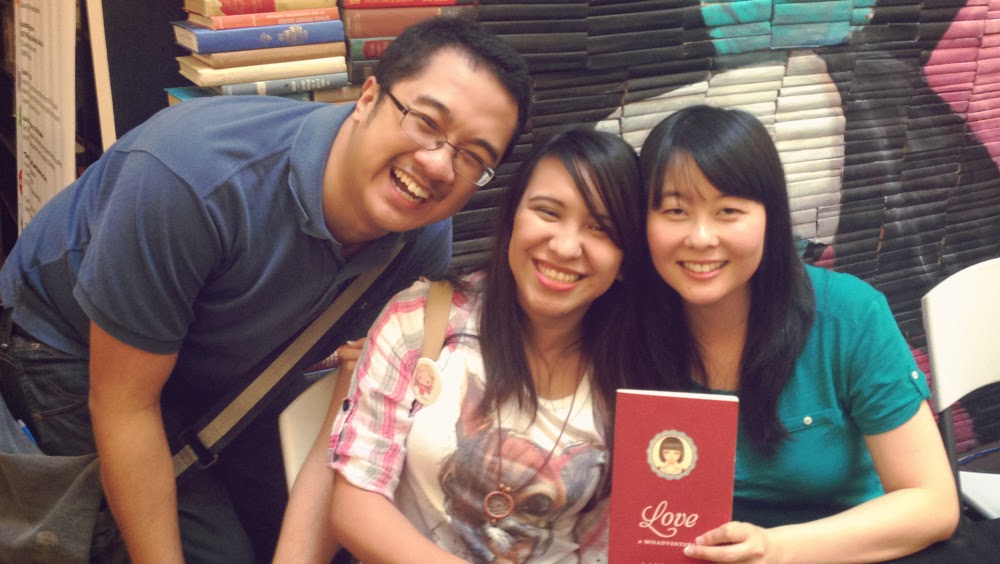