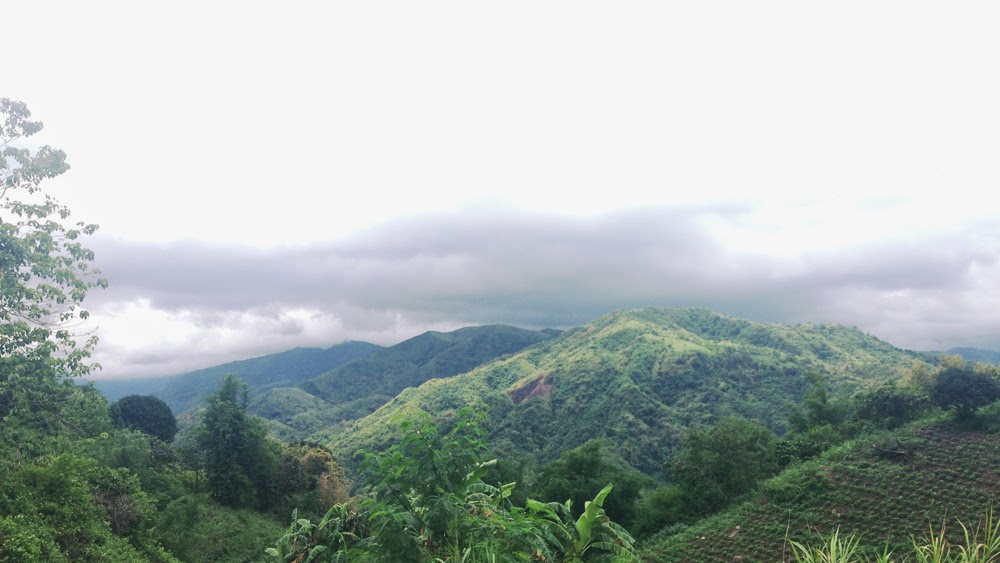 I am, of course, not the fittest of people. My belly worries me, and my weight is, too. I try to do some exercise whenever I can, but chances are I wake up late and the sun is high and I don't see the point of sweating a bit when I'll probably faint and die of heatstroke.

And yes, that won't apply in the coming rainy months, but it will be raining when I feel like walking. But what about the gym, you ask? Why not get a gym membership? Well, what am I, a douche? You don't like me already, so why will I give you more reasons to not like me?

Anyway, yes, I am, of course, not the fittest of people. I can do some things but not others. I can walk long distances, but I can't walk very long distances, and I can't walk distances that I think is long because of one reason or another. Take yesterday. I walked two kilometers, and a third of the way through, my heart was beating so loud I could easily measure my rate. Second clock moves. One. Two. Three. Second clock moves. "180 beats per minute," I told my companions, and I looked up to the sky and prayed that it wouldn't rain.

I was in the mountains of Rizal yesterday. No, it wasn't me trying to crash course my way to being sexy. I was there for work, sort of. The so-called night job, actually. I was there for an ocular inspection - that, apparently, is only a term Filipinos use, but I don't see why I should change my reality for your proper English - for a CSR project I somehow ended up co-heading. We went to the little school we'd be donating items to, and to get there, we had to drive roughly two hours from our Makati rendezvous to the outskirts of San Mateo, and then, when we realized the pick-up truck we brought isn't high enough to handle the very rocky trail, we walked the rest of the way down. Forty-five minutes, and two kilometers, seemed like an eternity.

You've probably heard of the La Mesa Watershed. It's all over the place - lots of trees, lots of activities, and an important source of water for Metro Manila. La Mesa took that role over from the Marikina Watershed, best known as the location of the Wawa Dam, which used to supply most of the capital's water until the Angat Dam was built off Bulacan.

But you still can't hit the importance of that area. For one, it's a huge place: roughly 25,000 hectares of mountains, trees and tributaries of the Marikina River, covering several towns and cities in Rizal. That's a lot of forest cover that we're not paying attention to, and possibly destroying. On the first half of our trip, by car, we were greeted by a bunch of factories, buildings on top of mountains, and an ongoing road widening project. Studies have confirmed that the record flooding Metro Manila endured in the immediate aftermath of Typhoon Ondoy was due to the Marikina Watershed not being able to handle all the rain that dropped on it. With nothing to hold things back, all the water went to a city that insists on building malls and subdivisions on riverbanks. You know what happened.

That said, a majority of the watershed is now designated as a protected area. That's why getting there is hard. Any construction project - any construction project - has to be approved by the DENR, and that has led to the place remaining mostly untouched. The forty-five minute walk to the school was very tiring, but you're treated to beautiful sights, of untouched mountains and skies that are allowed to be what they want to be. (I would've said "clear", but it was going to rain.)

But the walk was tiring. Maybe it's because the three of us - me, and two colleagues from Smart, who have spearheaded some of the efforts to help those living in the area - are city dwellers. We walk, yes, and sometimes we walk a lot, but we walk paved roads, mostly flat, and we know where we are going. Here, the trails are winding and there's not much to guide you. We'd see some residents, asking them how much longer the walk is. "Malapit na po kayo," they'd always answer, even if, as it turns out, we've barely begun walking. 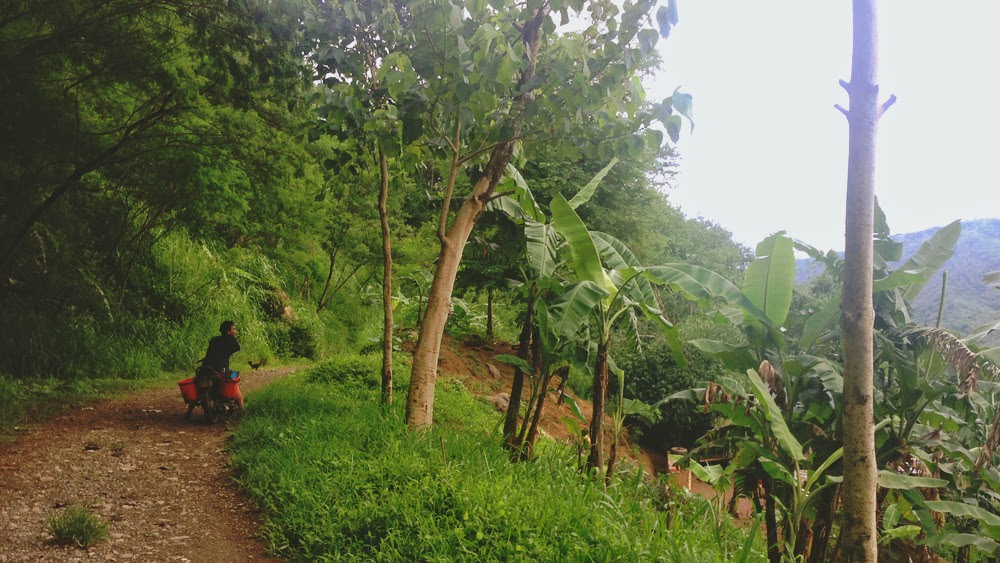 At one point, we saw a man, barefoot, driving a muddy motorcycle, selling fish to the residents. We talked to him a bit, asked if we're in the right path, and he says yes. We leave him behind as he deals with a kid, who came out of a house coupled with a plot full of sweet potatoes. Fifteen minutes later, we see him pass us by, and he gives us a smile. "Malapit na po kayo," he says again, as he tries to navigate the tricky trail. Everything starts to bend and you're not sure if you're going to die of heatstroke, or are just exaggerating it.

But then you realize that you've, at least, done something Survivor contestants won't do: actually walk to Tribal Council. And you push on.

Sitio Casili is a little splinter town that;s subject of a border dispute between the towns of San Mateo and Rodriguez. The sign on top of Casili Elementary School definitively says the latter. It is the largest of three schools in the area, with six teachers looking after around 150 students. It sits on top of a steep slope up the main trail we've been walking: full of trees, but with a few houses, too. Two sari-sari stores on the main road. A basketball court built, in part, by soldiers stationed there, purportedly because of the presence of communist rebels. Outside a few of those houses, I saw eggplants growing from bushes, seemingly fresh for picking, but are smaller than what you'd see vacuum-packed in supermarkets. We inevitably wondered: why would there be a settlement in what is otherwise a protected area, where construction of any structure would pass deeper scrutiny? "Water under the bridge," one of my colleagues said, as one of the teachers served us jackfruits, assorted cookies and coffee.

"Okay lang po," Joyce, who is part of Smart's department dedicated to this sort of thing, assured her. "Hindi rin namin kayo nasabihan agad. Hindi sumasagot si ma'am, eh," referring to the school's teacher-in-charge, who, turns out, was reassigned elsewhere.

Most of the students - and, except for Joy, all of the teachers - do not live in the immediate vicinity of the school, so they have to make the long trip back and forth. You either walk the long trail like we did, or you cross the river, like the reports on TV showed. Sitio Casili is at a point where two rivers - Buso-Buso, which has dirty water, and Montalban, which doesn't - cross. The other teacher with us (I forgot her name) said they only cross one river, but they have to cross it seven times. The whole trip, by foot, takes them two hours "kung mabilis kayo maglakad". The school ends classes early on Friday to allow everyone ample daylight to head home.

Since a photo gone viral and a bunch of reports on television news, Casili has seen a lot of help come in. The small school - four classrooms made of native materials, dilapidated chairs, a small stage - has seen many groups come and go, giving teachers, students and their parents many things. The usual uniforms and school supplies. There is now a small library, with two bookshelves donated by one company, an encyclopedia set donated by another company, and a flat-screen TV and DVD player, donated by yet another company. (There are no power lines in the area, but most things are solar-powered.) 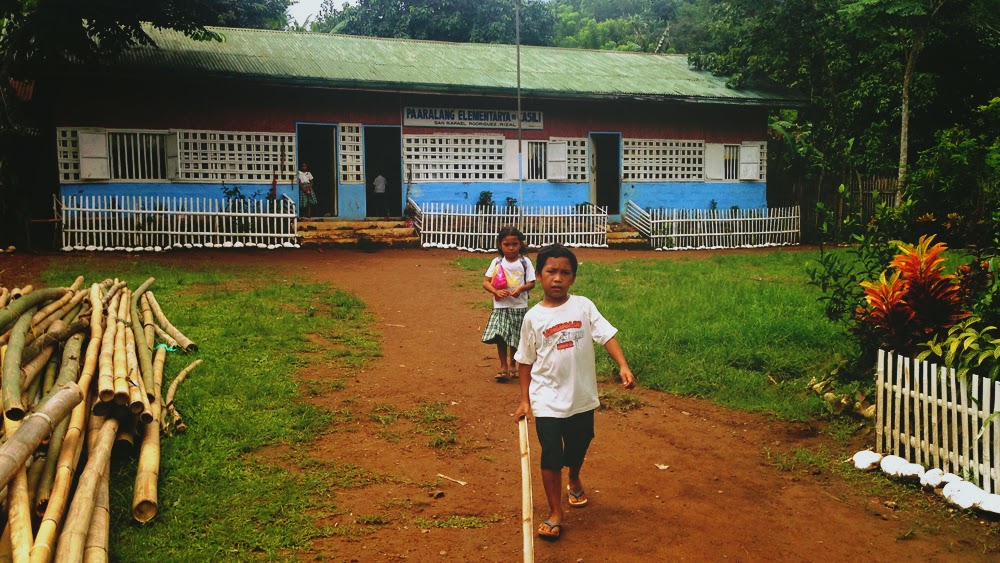 You've probably seen these news reports and thought the whole "they're doing this for the love of what they do" angle is overly dramatic, but it is what I saw there. Maybe it's the Filipino language's tendency to be too romantic? The students there were eager to study, or in the case of our visit, clean the place - during recess. (It has to be said that not everybody was there. It was, after all, the Friday after Independence Day, a holiday. Most of the kids stayed home. I wouldn't blame them: the trip is hard.) The teachers were very nice. I, stupidly, forgot to bring bottled water, so I was pretty dry when I got to the school; they let me drink some of their water, seemingly hard to get, but actually fresh from the river, complete with leafy aftertaste. A couple of hours after we left, they would call off classes so everybody could go home. You wouldn't cross one river seven times if you didn't love what you do. "Teaching is a vocation," they told us, and indeed, it was true.

They need raincoats, we were told. And the teachers are hoping for rubber boots, too. Slippers are great, but everybody changes footwear roughly three times a month, because of that arduous journey. With the ball now passed to us, we took a few photos and left to walk back, the trail now going uphill, back to the pick-up truck (and the guy driving it) we left two kilometers away. And a few more meters, as it turned out, because we asked him to move to a safer place once it rains. It did, so he moved away, but not after his wheels got stuck in the mud, and he had a guy help him out in exchange for coffee.

You begin to wonder why people can't be nicer here. Maybe it's all the conveniences? This is, I know, that typical overly dramatic conclusion to a story about a place so isolated, it's seemingly been left behind when every modern distraction took our aspirations for simplicity away. But here I am, typing this essay from a laptop at home, and there they are, in a place with no electricity (except, again, for the solar panels) and no mobile phone coverage. It's something I did not realize, so for five hours I was out of reach of everyone. The teachers at Casili seem to have found a way around it: they leave their phones on the bamboo fence outside the school, the only place where some sort of signal can be received. They send text messages from there, without removing their phones from where they are perched.

As we drove away from Casili and back to Antipolo, my companions slowly checked their phones for any communication they might have missed. One by one, everybody got their coverage back.

"May signal na ako," Avel, my partner in this project, said. "Ikaw?"

"Mag-Smart ka na kasi," he joked, as I checked my phone, repeatedly, if I got something. It was stuck at "searching..." until I was deep into Antipolo.
And your responses...