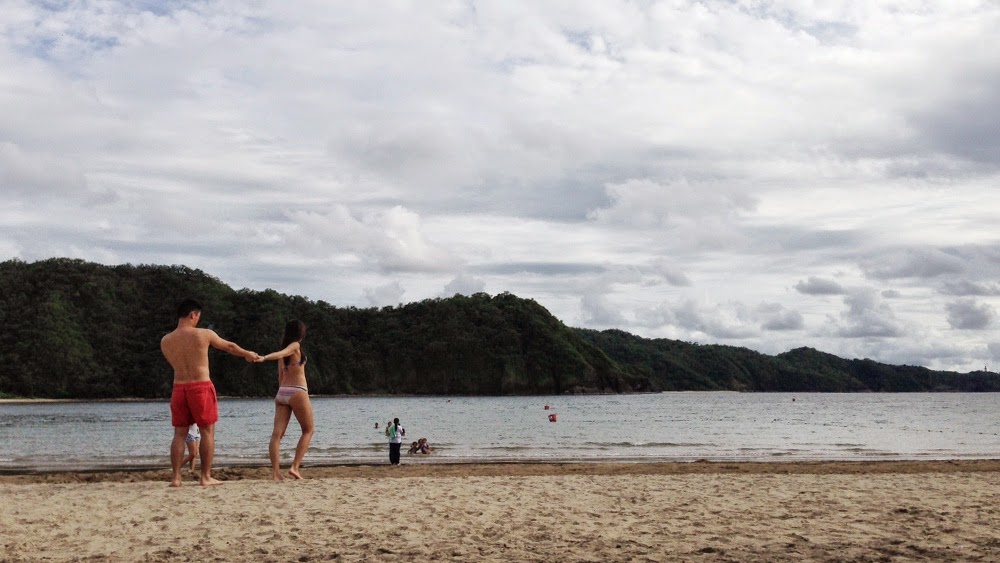 The last time I was at Pico de Loro, a little over two months ago, I was with Rainy. One last day at the beach, Sunday morning, the sun being harsher than usual, that usual being very harsh to begin with. There were, inevitably, a few people on the beach. Just a couple of families, if you exclude mine.

The loungers were big enough to accommodate two people, but it still surprised me that we both fit in there. I mean, I am a big person, vertically and horizontally. Or maybe I am exaggerating. We couldn't go to the beach because she was at that time of the month - then again, it didn't stop her from swimming, and getting jellyfish stings, the day before. That, and I no longer wanted to go to the water. Since I finished swimming lessons in La Salle a good six years ago, I have not gone to a pool. I only broke the streak when she came along.

And besides, it was really hot that day.

We ended up people watching. There were not much people to watch - again, temperatures - but we had our eyes on two girls, same family or something, doing the usual beach stuff. One was in her mid-teens, around sixteen. The other was perhaps six years older, or much older, because her face suggested just that. She was wearing this flashy bikini, and Rainy and I were staring at her ass.

This is where I would start quoting the two of us at this point, but to be honest, I have forgotten most of what happened that morning. Don't drill it down, please: I know I am a terrible writer, and I know I don't keep diaries like my favorite humorists do. (Nor do I have their sense of humor.) But I do remember a couple of things. I remember telling Rainy that I found the younger girl prettier, which inevitably led to some jibes about jailbait or something. I also remember that, in the process of me telling that, Rainy thought I was referring to a third woman, who was also wearing a red outfit - a third woman who was older, who seemed to be their mother, or a single aunt of theirs, or something.

I felt foolish, but I just hugged her. Minutes later the skies grew dark and, yes, it began to rain.

I was at Pico again over the long weekend. I know, it seems we'll be frequenting the place now, or at least as long as we get a place to sleep in. This time, though, I was alone in that lounger, finishing Maziar Bahari's book, a piña colada (which took forever to get to me) in tow, frothy and possibly not at all refreshing. Next to me, two empty loungers accompanied by an umbrella. A young couple went there and, like me and my girlfriend two months before, made themselves fit in one lounger, the one under the shadows.

Distracted for a moment, I watched the couple. She was wearing a bikini, and he was wearing board shorts. And they looked the part. How come all people at the beach look the same? I thought. The men are buffed and, maybe, have chest hair. The women are toned and slim, but for some reason have a big ass. And they can definitely fit into a lounger.

But mostly I just felt a bit lonely. There I was, solo on a lounger, reading a book, cocktail on my side, trying my best to fit in. There I was, worrying that I stick out, in all the worst ways possible. I don't look the part. I don't do the part. And I shouldn't care at all, because, I mean, come on - this is the beach! In here, you are invisible. You can do what you want. You are surrounded by kids making sandcastles and douchebags trying to score. You are invisible. And yet everybody looks the same, and you look at yourself, and you do not look like them.

I curled up, resumed reading my book, and imagined Rainy on the same lounger, us hugging.
And your responses...