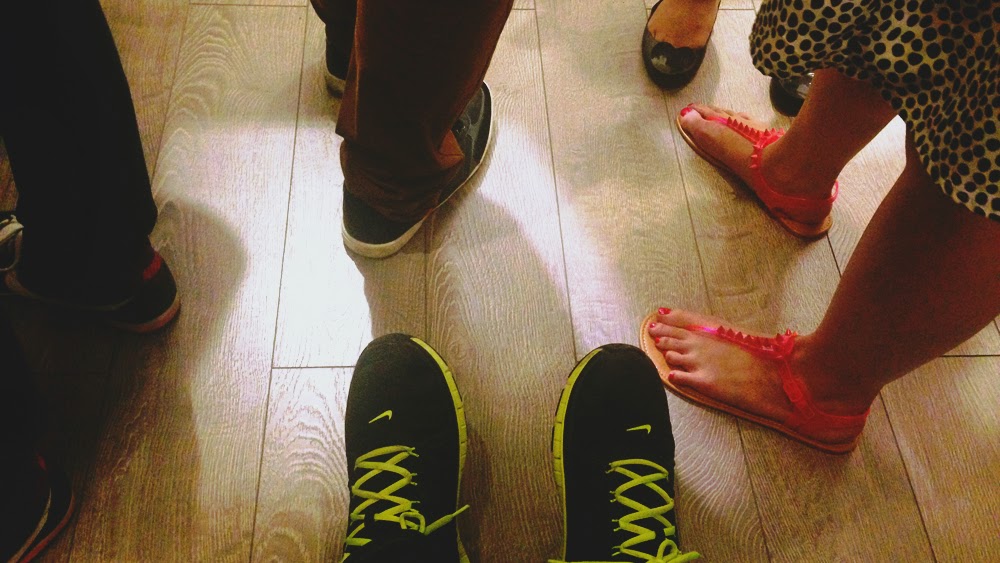 "Everybody claims to be socially awkward," I said, very much aware that, one, I am riled up again, and two, I shouldn't be, because I am in a coffee shop, talking to someone who, until three hours ago, was a stranger.

"No," she interrupted, as she fiddled through her bag and looked for a cigarette. "Everybody claims to be an introvert."

"Aha, yes!" I answered. "I mean, if you're an introvert, then declaring that to the world, repeatedly, isn't a very introvert thing to do!"

I am definitely not an introvert. The only time I remember consciously declaring otherwise is when I was in second grade, or maybe third, on the first day of classes, when I repeatedly said "I am shy this year" because I just didn't feel like introducing myself to my class, most of whom were my classmates just two months before. For the most part, I like talking to people. I like listening to their stories, and I like telling mine.

What I definitely am, though, is a fool. Or maybe unconsciously optimistic, the complete opposite of what I say I am. I know that there are people who you cannot talk to, because it's just not where you ought to be - but I cannot just sit there and watch things go by. "I am shy this year" only lasted for five seconds, when I had my teacher off my back. But that was the exception.

I sat, awkwardly, at the lone bench, as a small group of people, roughly ten or so, milled by the walls, looking closely at photographs taped to the walls, or printed and pasted on paper, or the actual things themselves. I've been there for thirty minutes and I've seen everything I could see: the independent magazines, the greeting cards, the twee bicycles, the vinyl records I scoffed at days before.

"What was your first vinyl record?" I asked.

"I was at the Makati Cinema Square," she said, and I remembered my childhood, tagging along with my father as he went bowling. "I saw this pressing of Fleetwood Mac..."

"Yes," she answered. "And I bought it. And then I realized I don't have anything to play it in. So, I said, I might as well start collecting them."

I have seen everything I could see, and I was surprised that I have. But I shouldn't have been. It is a small place, after all, and you could only mill around so much without looking like a vagrant or something. So, I sat on the bench, and looked at the feet of those people around me. And then I looked at mine.

Am I the only one wearing sneakers in this place?

I wasn't planning to go on an art exhibit. I would've. I would've brought my girlfriend along. "It's your gig," I told her often, but when it was clear that we wouldn't make it together, I ditched the idea. But then I had time, and I didn't want to go home yet, and I badly want to write something interesting and new (not that this is either of them) and, well, why not? I asked my girlfriend if she can go, a last-minute thing that defies my schedule-everything mindset, and it turns out her friends kept her awake with One Direction sing-alongs. It had to be just me. If I didn't go alone, I wouldn't be staring at everybody's feet.

I was hoping to spot Tootsie first, but she beat me to it - more of, she asked for me while I was typing out that text message that, in creepy fashion, merely said I spotted her. She's tall - well, considerably taller than my girlfriend, and I realize that I have not gone out with other people for the past two years. I could always ruffle Rainy's hair endearingly. I wouldn't have done it two years ago, when we first met, but I guess I got past that eventually.

I kept on seeing flats, and sandals, and that style of footwear that I saw on a style magazine and was interested in, only to forget what they're called. One pair of feet stood out. Platforms. That's not the right term. That dates everything, plonks everything firmly in the 1970s, and it shows how out of touch I have been. Two inches off the ground, maybe three. I've been seated there for fifteen minutes, turns out, unconsciously waiting for the right time.

There have been worse situations. Packed film premieres, swarmed with students, aimlessly walking around, somewhat hoping to get a chance to say hi to the actors you just watched minutes before. You'll end up with blurry photographs, a given considering the bad lighting and the few megapixels you could pack into your phone then, a decade ago. Everybody's a stranger, except for the people you're aimlessly walking with, involuntarily making a shared experience that you either cherish forever or forget immediately. This time, I am alone, but I am, as far as I know, not a stranger.

"Tell me something about you," I tell Tootsie, as she sipped water - stomach problems prevent her from ordering coffee - and I slurp the last of the blended drink I had no choice but to order, thanks to the truck ban.

"I have nothing to say," she answered. "I'm more of the listening kind."

I have heard this before, and I did not like it. "I believe in reciprocity," I answered, knowing that it's not what I would have said three years ago, in another coffee shop, when I was sure I was very awkward, and for different, possibly more nefarious reasons. "Besides, I've been talking a lot here."

Usually I'd be sitting nervously, heartbeats escalating and stomachs turning, but this time, I wasn't. And I was surprised, really, that it was the case.

"Hi, Reese," I said from my seat, peeled fruit stickers in my mind.

In two words, I introduced myself. I'm the blogger who wrote about you because my girlfriend likes you so much, the guy who wanted to go to your launch but couldn't, officially, because I had a friend to meet and I had work on other days and I had a flight to catch the weekend after, but now, for some reason, is here, sitting awkwardly, watching pairs of feet patter around the wooden floor.

"Oh, hiiii!" she said. "Buti nakarating ka!" And, in a completely unexpected but welcome gesture, she hugged me. For lack of a better translation.
And your responses...