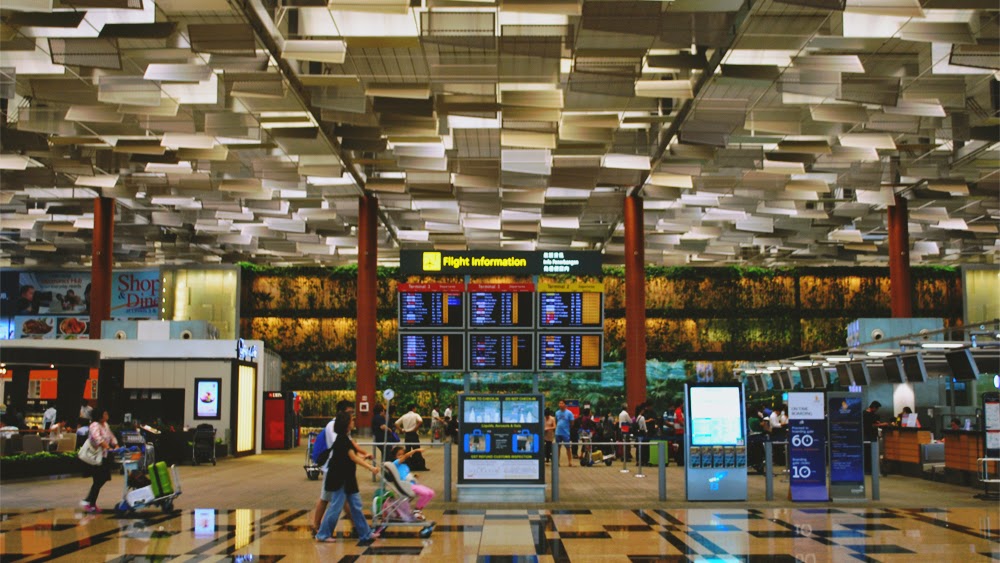 Thankfully the whole of Changi has free wi-fi - free and reliable wi-fi - so I was able to send a few more messages to my parents. Just the usual things. You tell them where you are, so they don't have to check on you, and get overly worried, and maybe prevent an awkward situation or two.

I wouldn't usually ride Singapore Airlines. I mean, I would, if I could. Why wouldn't I? I mean, I'm no frequent traveller, and I've never been past economy, but I still like their attention to detail. I like that I have a choice, from the films I can watch, to the drinks I can consume with my meal. I like that their lavatories have mouthwash, which comes in handy after that meal. I like that they offer a lot of magazines for reading, although I will be the first to admit that I don't read those magazines, because I bring my own reading material.

The downside to this, simply, is that the tickets are expensive. Quite expensive. I don't have the exact figures, because the only times I've flown Singapore Airlines - six times in total, three to Singapore, three back to Manila - is for work. Well, the last two times were for work. The first time, in 2009, saw me fill in last minute for my mom, who was supposed to accompany dad to Singapore; she would do stuff while my dad attended meetings. (This also explains the anomaly of me being checked in at the Sheraton. Me sleeping in a five-star hotel? I never quite grasped it until, well, today, with hindsight, now that I've spent so much time at the EDSA Shang organizing events.)

I mean, I could always take cheaper flights to Singapore - and I have flown to the country via Philippine Airlines during my first trip there, in 2008, and, shudder, I will fly there in a couple of months via, shudder, Cebu, shudder, Pacific - but my office is paying for it, so, well, why not? It's some sort of policy, I think. Some sort of unspoken policy, if you're flying international.

So, among the family, it's been a bit of a badge you wear with pride. All but my youngest brother have flown SQ. (I don't think he minds.) We have all compared notes on what we've experienced during our flights with the airline: what movies we watched, what dessert we had, that sort of thing. And we all know flying SQ pretty much puts you at the top of, well, something. That definitely explains the messages before I boarded. "Enjoy the SQ flight!" Don't worry, mom. I soooo will.

My return flights - this is regardless of airline - are always a big jolt back to reality. You're in a foreign country for an extended period of time and you see all these different people. After a while you get used to it. They're no longer foreign. You're no longer foreign. But you fall in line at the airport and you hear the language you speak, and every face is familiar, and the fact that you're a visitor returning home sinks in.

But there's something different whenever I return to Manila via Singapore Airlines: my fellow passengers tend to be, uhh, more boisterous.

I don't get that with PAL. My fellow passengers tend to be a bit more disciplined, a bit more, err, prim and proper. Cebu Pacific? Those are cheap tickets, my friend, so you know what to expect. And yes, I know that I sound like a snotty person, a guy who regards his exquisite tastes and preferences so highly, he does not want them dirtied up by some guy who wants the cheapest option because he doesn't know better. I have been trying to avoid that tone all throughout this entry, but I realize I can't help it, because my mind goes back to last Saturday night, with me sat on my aisle seat - pondering the fate of my phone's denim case, which I likely dropped somewhere between gate E11 and my seat - surrounded by these loud Filipino men.

I surmise that they're overseas Filipino workers returning home. So, yes, they're excited. They're going home! And, no, I do not want you to read this as an attack on OFWs. I swear this wasn't what I was thinking when all of this was happening... but sod it, you'll think I'm defensive, yes?

I must get on with it.

I think they're also aware of Singapore Airlines' classy reputation. The difference is, they can't keep it in, and I can. Well, this is my sixth flight. I know that, before the plane takes off, the flight crew will give every passenger rolled up hot towels. This is followed by your personal headphones, and then, by the night's menu, telling you what you can have for dinner, and the myriad drinks that accompany it. (You only have two options. You're still in economy. You can't ask the chef to cook you something special.) And then, since this isn't a morning flight, you'll be offered a first drink. Beer, wine, or juice?

"Beer, please," I say. I get a glass of not-quite-cold beer and a packet of mixed nuts.

There was a bit of a mix-up on board. For some reason - or maybe this is deliberate - the flight crew offered mixed nuts for a second time. The two men beside me, wearing thick jackets, ask for a second one, and then joke among each other.

I am surrounded by these men. I checked in early on Friday - online check-in is such a wonder - and I was pretty sure nobody was seated in my row. But now there are, and it's these men, seemingly fascinated with every nook and cranny on their seats. And one man in one row talks to another man on another row all throughout. I miss my denim phone case.

"Sir, please put up your foot rest, the plane hasn't taken off," the stewardess, speaking quickly and with a thick-ish accent, told one of the guys on my row.

You only had two main course options. You either had the sweet and sour pork on rice, or you had the pan-fried bass on potatoes. I was, by then, busy watching 22 Jump Street, remembering again that watching these films on a small screen with low resolution is, well, a bit excruciating. Are you missing a visual gag somewhere? What did Channing Tatum say? Oh, wait, it's an onboard announcement.

"Chicken," the guy beside me says. There was an appetizer, and it is a chicken salad. I should've taken the menu and brought it back with me.

"I'll have the fish, please," I say, in my apparently American accent. I felt good about myself, and two seconds later, I felt filthy. Two more seconds later, and the meal was in front of me. The chicken salad, the coconut cake, a bread roll, butter, the fish. I take the bread first. I couldn't resist looking left, to the guy who asked for chicken. He was eating his pork first. I know that observation is very snotty.

"And what will your drinks be, sir?"

"Which cocktail is available?" I ask.

"I'll have the martini, please." I've had my eye on the martini for a while now, because, well, Rainy.

"And you, sir?" There's the other guy beside him, the guy who got told off for putting his foot rest up too soon. He's asleep.

It's weird, watching 22 Jump Street while having a martini. But at least I know it pairs well with the fish. This wine thing confuses me. Red for meats, white for fish, but other spirits? Vodka on fish? Sounds about right, but I honestly have no idea. I eat with a knife and fork, too, because, well, I can. And then I hear one guy from one row talk to another guy on another row, and I stop myself from using my unused spoon as a weapon.

And that goes on, for the rest of the three hour flight, but it could be worse. I could be on a Cebu Pacific flight, with little leg room, surrounded by noisy people, unable to eat properly because they'll only offer you instant noodles and you'll have to pay for it. I could be on a Cebu Pacific flight bound for Manila - heaven knows how terrible Manila is in contrast to Singapore. I'm not quite willing to let go of all the peace and order for, well, the thing that made me excited to go to Singapore in the first place: the escapism, to a degree.

Or, worse, I could inadvertently keep my foot rest down as the plane makes its final approach. "Sir, please put your foot rest up, we're going to land," the stewardess says, and I realize that, damn, we're almost home, and for once, I'm the one not following instructions. Shows how little I know.
And your responses...