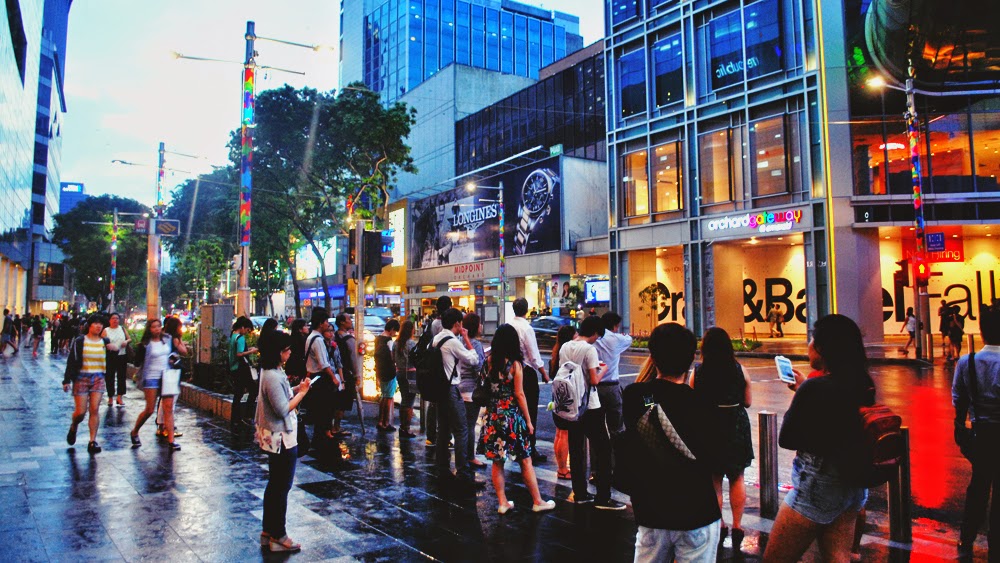 First, a caveat: that isn't entirely true. I've been to the country only four times, twenty-five days all in all. (If we're counting days, my sister has been there longer: she spent two months there, a couple of years ago, to try her luck.) I spent most of my time in the country's southern coast. Landing at Changi and taking a cab, through the ECP, to my hotel somewhere in the city center. Walking distances from as far west as Havelock Road to as far east as Scotts Road. Boarding a shuttle to the Tuas industrial district - apparently far by Singaporean standards - where I spent most of the past week. I barely covered half the country, much more all of it.

I could be forgiven for focusing on tourist destinations, but I haven't been to all of them, either. While I have strolled Orchard Road and seen the temples in Chinatown, I haven't gotten to the top of Marina Bay Sands, nor explored the whole of Sentosa. There are things that I don't want to do, and there are things I'm not willing to do again despite the change of location. (And then there's me having been to Night Safari twice, the first with family, the second with colleagues - as if I had a say in it.)

That said, it feels like I know Singapore like the back of my hand, or at least a portion of it. I wouldn't call myself an expert, but at least I know my way around. The past week I saw myself as an impromptu tour guide for my colleagues, telling them the best way to get to Gardens by the Bay from our hotel, a black hole of easy-for-tourists transit options. "I think we should go to Clarke Quay," I said on our second night, only to find myself walking to Chinatown, only to find ourselves eating at a McDonald's. We do get to Clarke Quay and two of my colleagues, who haven't been here, dropped their jaws upon seeing the district's lights at night.

My dad first went to Singapore, for work, when I was around eight or nine. This was around the same time I began collecting newspapers from other countries. He brought me a copy of The Straits Times as well as a bunch of maps, brochures and tourist guides, and I devoured them all. It's become a bit romantic, my fascination with the tiny country. The streets mostly go one-way, the malls all sit beside each other, and Sentosa is an island theme park - as a kid, that was perhaps the most amazing place to be in. And it's just a plane ride away. That was enough to get me past my fear of plane crashes. It would be a full decade before I finally go there, an excited kid finally fulfilling a childhood dream.

It's been almost six years since that first visit, and I feel like I have done everything.

"Boring dito sa Singapore," Y2K told me over dinner on my fifth night. She's been working in the country for roughly a year, so if anybody I know has seen more than I have, it's her. To boot, I was seated beside Nadia, who's close to clocking in five years in the country. If anything, I should trust them, as they certainly have been there for longer - and after she said it, I'm starting to realize how true it really is.

Singapore has a reputation for being all buttoned up. "This is a very fine city," the tour guides always say. "Litter, you pay fine. Chew gum, you pay fine." Yes, in recent years they've been trying their best to shed that image, slowly moving their business credentials away from the spotlight and focusing instead on the whole creative, fun aspect. And they built two casinos to boot, too. But once you get past the shopping and the sightseeing, there really isn't much to do. You get the impression that the government is spending all this money just to keep their citizens entertained, and the tourists, too. It succeeds, yes, but something still seems missing. The Supertrees, for one, are impressive, but it all feels so sterile. As for the chewing gum, some still think it's banned in the city-state.

For most of the past week I found myself experiencing what my father's experiencing recently: when you're done with the day, you'd rather just stay in the hotel room and fall asleep earlier than usual. I still went around - Chinatown on Monday, Orchard on Thursday, a bunch of dinners in between - but for the most part I felt like I've seen everything, done everything, and would rather just lie down in bed and fall asleep to news about, literally, grass growing. I wasn't as excited as I expected myself to be. Perhaps it's because I was there for work, but still, a foreign trip is a foreign trip. A company-funded foreign trip is a company-funded foreign trip. I might have not crossed that critical threshold yet.

The difference, however, is the fact that I wasn't alone. I was with three colleagues in that Chinatown trip: my Australian colleague, who I met two years prior, and two new colleagues from our offices in India and Vietnam. Again, I suggested Clarke Quay, mostly because it was closer, and partly because I just knew we'd end up not being adventurous and go to a mall, but somehow we decided on walking longer to Chinatown - why I insisted on walking, I'll never understand - and, yes, ended up at a McDonald's branch, me eating a spicy chicken wrap and enjoying the chili sauce that came with the fries.

Singapore is best enjoyed with company. This is not a quick and cheesy observation. When you walk the city's streets alone, you notice that the whole place is built for isolation. It is built for people who wake up at a set time, go to work, and then, when everything is done, go elsewhere to make the most of what's left of your day - or go home and get rested. I walked to Clarke Quay alone on Thursday - this was dinner with Y2K and Nadia; I left my colleagues alone - and I saw people on scooters, or skateboards, or bicycles, definitely making the most of the public space that is abundant in the country. For one, it's nice that they have all this public space. Heaven knows we need it in Manila, badly. But they were skating alone, biking alone, earphones plugged in. It just felt a bit off.

You see the country try hard to get its citizens together, whether it be by gambling options, fancy structures, or at the very least, campaigns encouraging courtesy in the MRT. But years of staying as close as possible to organizational utopia has made Singapore a paradise for those flying solo, and as a result, it's become the perfect place for one to feel free to take control of your own destiny. I can walk the sidewalks and get lost, and yet feel that somewhere out there is a way for me to get back to my hotel, rest my tired feet, and start again.

Contrast that with the Philippines, of how it's chaotic and exciting at the same time. You may set out alone, but at one point or another everything becomes a shared experience: the long train lines, the crowded jeepneys, the rush to get to work in time. Before you know it, it bleeds to lunches, and dinners, and conversations over artisan coffee or laundry duties. The chaos starts a conversation, and the conversation becomes the most critical part of the experience.

I arrived in Manila last night, and after going past immigration and getting my luggage, the first thing that I saw was nothing short of confusion. For all its supposed modernity, NAIA's third terminal is still a transportation clusterfuck: vehicles squeeze each other out to pick up their passengers, while ahead of me, three women were calling my attention. "Taxi, ser!" they shouted, repeatedly, as if it is a good alternative to "welcome to the Philippines!", not knowing my father would be picking me up. I was sweating, frazzled, and curious as to why nobody in government thought of putting a train station in our airport. I wished I was in Singapore again. But, I then thought, as a family walked up beside me and waited for their relatives to pick them up, at least I'm not alone in this.
And your responses...