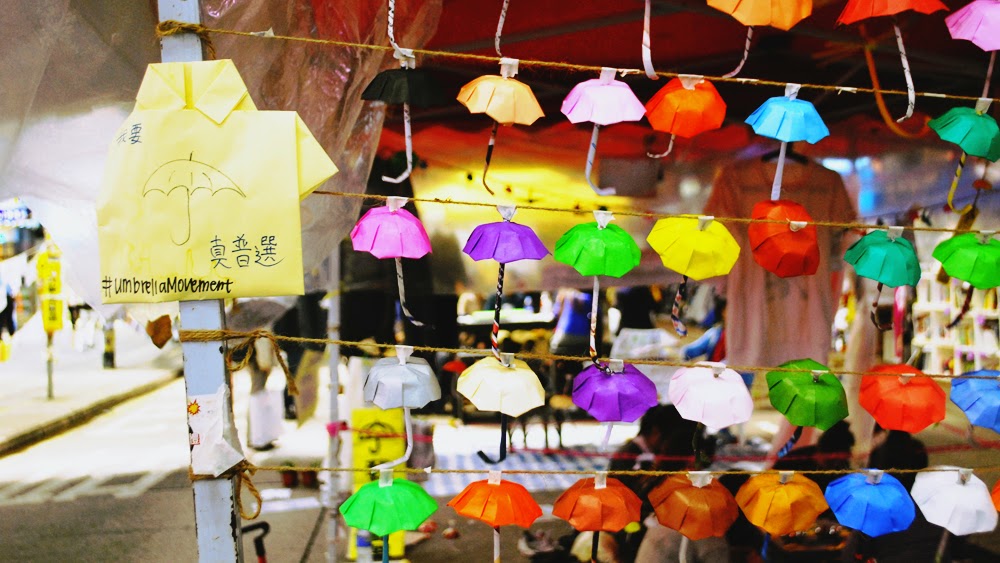 Hong Kong is a busy city. With 7.2 million people crammed in just over 1,100 square kilometers, there always seems to be something going on wherever you turn, especially in the urban areas of Kowloon and Hong Kong Island. Or maybe it's because the streets, or at least most of them, are small. Or because the sidewalks are narrow. Or because there are just a lot of signs above you as you walk those sidewalks, fluorescent and neon, for convenience stores and restaurants and boutiques and, discreetly, mahjong places. You see newsstands to your left; buses and taxis to your right; and you navitage through pedestrians walking the other way, or showing up from out of nowhere, having crossed the street even though the lights are red.

And then, suddenly, there's nothing.

Well, that isn't entirely true. You're still on the sidewalk. You still see people walking those sidewalks, entering those shops, leaving it with a drink or a paper bag of something. You still see twenty-somethings walking their dogs even if it's past eight in the evening. But you don't see the vehicles anymore. In their place are lots of blue: blue police cones supporting blue police tape, a single strip of it blocking that whole stretch of Hennessy Road, which includes a major mall and some pretty posh shops.

One more intersection later, and the barriers change, to metal ones, haphazardly put together, tied with white and black fabric, and peppered with scraps of paper with different things written on it, or printed on it. It's mostly in Chinese, but some are in English, especially when they're citing Margaret Thatcher or Martin Luther King Jr. or some other international figure. "Young students are learning things that will never be taught [in] school," one of those slips of paper went. "That is the dark side of human nature and how to deal with the devils."

The Umbrella Revolution protests have been going on for almost two months now at this point. Protesters - first led by student groups, and later by pro-democracy advocates - began rallying in late September, reacting against what was perceived as a betrayal of the electoral reform process that has been going on for the past few years.

Hong Kong's constitution, the Basic Law, stipends that the ultimate aim is for the city to elect its Chief Executive by universal suffrage, the idea of  one person, one vote. Currently, the city's leader is selected by a 1,200-member Election Committee, supposedly broadly representative of the city's many sectors, but is perceived to be dominated by people who are perceived to be closer to Beijing. The city's current Chief Executive, C.Y. Leung, was chosen in 2012 with only 689 votes, or only 58% of the committee - a small percentage considering the overwhelming victory his predecessor, Donald Tsang, enjoyed.

The latest batch of talks on electoral reform began this year, with the Chinese government open to the notion of universal suffrage. However, the Standing Committee - a committee within the Chinese government that interprets Hong Kong's constitution - decided that there must be "safeguards" for selecting the Chief Executive by this manner. To that end, they decided that a nominating committee select two to three candidates for the 2017 polls, who will then be voted for; whoever wins must then be "appointed" by the Central People's Government. These methods have been portrayed as a way to protect Hong Kong's stability, but protesters fear that this would mean candidates who are deemed "unsuitable" by Beijing will be barred from running.

Thus, the protests, in several major points in the city. Some of them have been dismantled completely - the ones at Wan Chai, Tsim Sha Tsui and the Golden Bauhinia Square lasted only a few days, either voluntarily or otherwise. When I visited, only four sites stood: the original protest site at Central; one at Admiralty, which was partially dismantled during my stay there; one at Mong Kok, which was also facing dismantling due to a court injunction; and the one at Causeway Bay, the one I was looking at.

I can't help but wonder: what exactly are they still here for? Things have somewhat died down after the first few weeks of October, when protests - and the dispersals - were at their most dramatic. The Hong Kong government has since opened itself up for negotiations with protest leaders, although an attempt by student protesters to plea their case to the Chinese government was scuttled when they were blocked from flying to Beijing. They vowed to stay until they get genuine universal suffrage, but opinion of the protests is slowly splitting, with some frowning upon the disruption the movement has caused. I can certainly attest to that: the free shuttles from Hong Kong MTR station, the last stop of the Airport Express train, to my hotel in the middle of Wan Chai was suspended until further notice due to the protests. I had to take a cab - a little over HKD 50, if you're asking - and sit through lunch traffic.

Then again, put yourself in the area surrounding the protest sites. The one in Causeway Bay, for instance, is in the middle of the shopping district's busiest part, the road crossing splitting Hennessy Road and Yee Wo Street. One of the city's biggest department stores, the 13-storey (and definitely full) Sogo, sits on one end; several other shopping centers are on the other end, leading towards Victoria Park. Passageways leading to the Causeway Bay MTR station are peppered throughout. Here is where they decided to make a stand and call for universal suffrage - at the point where most people come and go.

The crossing is now empty, or at least devoid of its usual traffic. It is fenced in, albeit loosely. People come in and out. I have come in, and I have come out. In place of buses and vehicles are tents, lots of them. Camping tents are on one side. Right beside it, a big tent designated as a study area, where students can do their homework in peace; it even has a bookshelf, made of styrofoam containers, classified by subject, and not necessarily about Hong Kong or China. I think I saw a really old Photoshop instructional manual. Cleaning materials are on one corner; a recycling area on another corner; boxes of bottled water, "free for supporters", sits in yet another corner. On the floor, a map of Hong Kong-born shops, with a plea to help "renew the shop indicators because of damaging by the anti-occupants." And, all over, signs, some in English but mostly in Chinese, of what I can only imagine are pro-democracy messages.

I'm pretty sure photographs are not allowed. I went in the site and inadvertently took a photo of who seemed to be one of the leaders, an old man with gray facial hair. He came to me and asked that I delete the photo, and I was going to oblige, while explaining that I'm just a curious tourist who wanted to see what I've been hearing in the news for weeks. He smiled, and then, for some reason, asked me not to delete the photo - or at least that's what I thought he said.

I was just interested in the infrastructure. Here I was, in a protest site, and it feels like a self-sustaining community. Sure, they likely buy their food from the many convenience stores and stalls around Yee Wo and Hennessy, but one part of the site had potted plants, encouraging, I assume, farming, from the "come farm!" streamer beside it, the only English words I could see there. But these are minute details compared to all the streamers, quoting everyone and everybody, varying, I assume, in degrees of radicalism. I don't understand a word of Chinese, again. I can only tell you that I saw shirts with Chinese characters, and yellow ribbons, and some streamers that look professionally-made, for lack of a better term. You have a graphic comparing Hong Kong's "heaven" to China's "hell". You have signs that say "no photos", useless signs considering they have become a bit of a tourist attraction - people are taking photos all around it. You have photographs of the violent dispersals at Central hanging on long pieces of wire.

The term "umbrella revolution" - or "umbrella movement", if you're with the protesters and think the former term sounds too violent - stems from the use of, well, umbrellas to shield protesters from tear gas. It has since become a symbol of the whole pro-democracy movement, a movement that's been simmering for years and reached a boiling point in these past few months. I don't know why it had to be a yellow umbrella, but they've adopted that color, too. Have they been watching How I Met Your Mother all these years? The students - they all look like, well, students, not your usual idea of hardened protesters storming the streets here in Manila - have been spending their time studying, doing homework, chatting, and in between, making umbrellas out of paper.

There was a box of them. "Please get one," it said outside. There were only two remaining, and I stooped to get one of them - I thought it'd make a good souvenir. One of the students - a girl, in her early 20s - noticed me, and there was a bit of awkward tension between us. I don't know. Did she not trust me? Did I not trust her? Does she think I'm a spy? Do I think she's out to kick me out? You suddenly remember that, despite the calm, there's still this.

I picked up the umbrella and hid it in my pocket, hoping nobody notices. I'm just a tourist. I don't know what could happen.

The umbrella is a potent symbol, yes, but I saw a stronger one in the barricades, in the tents, in the streamers, in the entirety of the protest site at Causeway Bay, sitting in plain sight. Pedestrians take photos, stop and read the streamers, and remember that despite Hong Kong being one of the most important cities in the world, for business and tourism and shopping and just escaping wherever you came from, there is still a dark cloud hovering above it. Now, I won't take any sides - I cannot fully grasp the whole situation, whether it be my stature or the language barrier - but it is clear to see that some don't mind the cloud, and some badly want the sun to shine. I don't know where this will lead, nor will I claim to have an idea, but I do know that those who want the sun are working to make the rest realize that the sun is a good thing. The protest site is a microcosm of what, perhaps to those within the barricades, a truly democratic Hong Kong could be. They're there to show that it can work, that it can bring good things. Whether everybody else is in the same book as them, I will never truly know.
And your responses...

I met a businessman from HK last week and he told us that the movement is now losing support. The guy said HK is just a tiny dot of an island and the message that those youngsters want to tell the world has been said loud and clear. Dont know if he's a big supporter of the Mainland, but he's hoping that the kids just pack up and attend their classes.