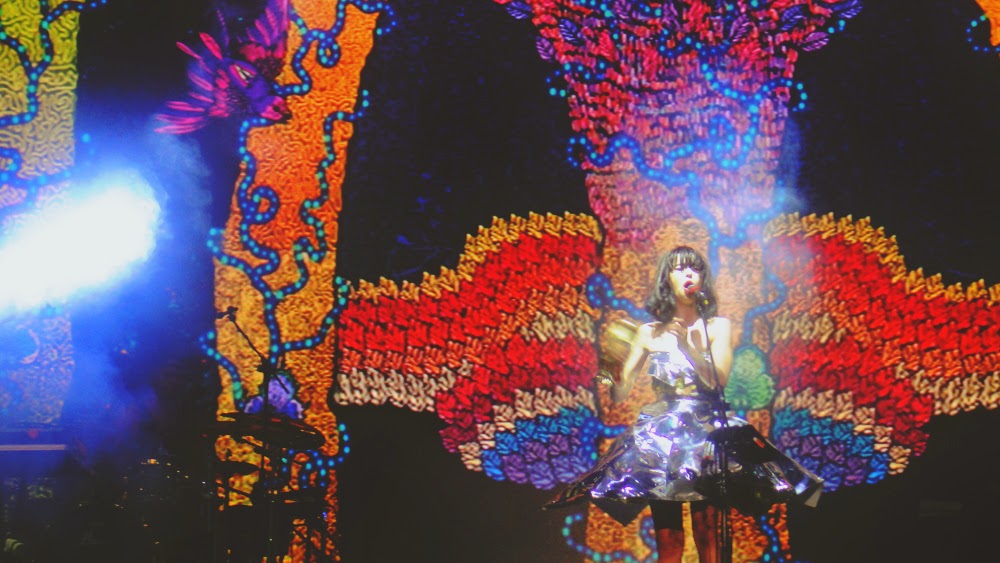 Longtime blog readers would know that I got into Kimbra around the time this blog started, and I have since loved her jittery, crazy, sexy mix of jazz, funk and pop: an electronic beat under Motown flourishes, that voice that can go places, and the ability to stage a fun, to-hell-with-everything live show. She almost wasn't on this list, but I write this in a week when she wraps up production on her follow-up to Vows. I can dream of being the guy whose stage is where she debuts her new stuff, right? Yeah, I can.

I wrote that last February over on earthings!, as part of that Fantasy Festival week thing, where I pulled a bunch of people to, uhh, curate a stage featuring international acts that they want to see live, because, well, if we don't like the line-up of the music festivals that have appeared like mushrooms in the country in recent years, then why don't we make our own, right?

Of course organizing a music festival is hard. You need to know all these people, coordinate all these things, have all this money, and possess the ability to call anyone who makes even a passing vaguely negative remark a "hater". So, yes, all we can do is go on YouTube and watch live videos, living vicariously through the fuzzy camera phones that those with access think are ruining the experience. In my case, it was that one day in April, two years ago, when I saw Alyssa tweet about Kimbra, and me going, "I've been meaning to look into her music, but why haven't I?" I mean, I listen to Triple J a fair bit, and even if she's actually from New Zealand, the Aussies have more or less made her their own, like they would with Lorde a year later - anyway, I listen to Triple J a fair bit, and yet I only really remembered Kimbra from that Gotye song, and the comments on the official video on YouTube, from half-perverts who wished she turned the other way around.

Two years later, I own both of her CDs. I had my parents buy Vows in Japan; I hunted down The Golden Echo on my last day in Singapore just a couple of months back. And now it was my turn to freak out on Twitter, and to Aly in particular, because the impossible has happened: Kimbra was coming to Manila.

But they don't sell her CDs here! How could that happen?

Well, I did see Vows in Manila once. On vinyl. At Satchmi, that store run by people who genuinely believe people who buy CDs, like me, are lame.

For some reason, that news flicked a switch on me, a switch that hasn't been turned on for a while. Suddenly it was 2010 again, when I was catching up with all of the things I supposedly missed out on. Here I am, a guy who's angry at how the concert experience is romanticized by the very people who stand to earn lots from it, at how those people take advantage of the self-entitled nature of kids today, suddenly, well, hell bent on going there. And I say this because I am pretty sure I steam-rolled my plans on Rainy the day tickets were sold. Do you want to come? Please come. Please come. And so she did, and the concert - well, a music festival, organized by a television channel - became our second anniversary thing.

But then I'd talk to Alyssa, and we'd freak out over news that Kimbra flew in days earlier than we expected. That flicked another switch on me, a switch that I did not want to turn on anymore. Suddenly it was, again, 2010, again, when I still had the hubris unbecoming of an entry-level outsourced slave, and I decided that I can go to places just to get a jump on everybody else.

"Imagine my frustration yesterday, being so close to the [press conference] at Aracama while having lunch at Wildflour," she tweeted on Thursday, the day before the concert.

There's a hasty metaphor here, about me growing up and now being bothered by not meeting people who I, more or less, idolize - I say that because I'm pretty sure I never had idols growing up. Or whatever that really means. I look up to people, but I never believed in putting them in pedestals. Nobody is just awesome, end of.

But, I don't know. For some reason, at the back of my head, "I have to say hi to her!" was running wild, without constraints. But I knew it was next to impossible. I knew more things now. Call me a bit more cynical than four years ago. Access. Well, okay, I haven't been thinking of that concept the whole time, but I do know enough now. You have to be extraordinarily lucky to get that chance, especially if you're acting "alone", meaning you're not with a fan club, or with the (favorable) press, or with the organizers. And yet I went to the concert venue on Friday, armed with the Ceremonial Dia Frampton Sharpie and both of Kimbra's records. The plan was to buy shoes, meet Rainy, have a very late lunch, and go in line just before the gates open at four in the afternoon.

"I've been here since around one."

All day I was calling her Gayle. I misheard. She's actually Dale. She's an architect, based in Baguio. She made the eight-hour trip to Manila, by land, for the concert. She's been waiting at the gates since one in the afternoon; she's spent so much time she's made friends out of the bouncers. Rainy and I, on the other hand, were next in line to her, and we got there at half past three.

We had nothing to do, so we were watching people make their way past the gate, and then realize that they were either too early, or were in the wrong gate. Some of the performers were dropped off at this gate, clearly marked "VIP" - tickets, tickets - when there was a special gate for them, straight to backstage. We'd see slightly familiar faces lugging guitar cases be turned away, because, well, aren't you ought to be backstage?

"Dapat alam na nila 'yan," I said, as the soundchecks bled out of the stage and towards where we were.

Damn, I could've had my albums signed. I opened my bag and looked at those two CDs, checking if the jewel case on The Golden Echo had a crack from all the walking. None, thankfully.

Alyssa knew things, so she told me that Kimbra's set was to begin at midnight. And indeed, it was the case. Rainy's feet were tired and I was getting a bit cranky, but there was that delicious speaking voice on the speakers. There we were - Dale, Rainy, me - up against the barriers, watching the 24-year-old on stage tease, and then bring out, "Teen Heat", while extra security came in front and obnoxiously prevented the audience and the media from taking photographs. I was, of course, entranced. This is not something I expected to happen, ever - or, at least, not without me having to take a plane to elsewhere. She was in Singapore two years ago. Laneway. The first time Claud told me about it, and I got oddly excited. I was that close.

And then she spoke. "Salamat, Manila!" she exclaimed, repeatedly, throughout the set, obviously rehearsed, but still. That speaking voice. And, for our hours-old clique, the thrill of seeing that loop set we saw on YouTube over and over.

At half past one, as the Kimbra fans left and the ravers took over, us three headed to the bar area. Apparently all we paid for was a bar area, and we weren't even willing to drink alcohol, because it's late, and we're cranky, and, in my case, I had to drive Rainy. "My round," Dale went, and we all had small cups of cola, while we sat on the floor, because all we had are "VIP standing" tickets, whatever that really meant.

"Excuse me," I told Rainy as she finished her hotdog sandwich. "I'll go meet Aly."

And, a few steps later, for the first time in six years, Aly and I had a proper, face-to-face conversation.
And your responses...