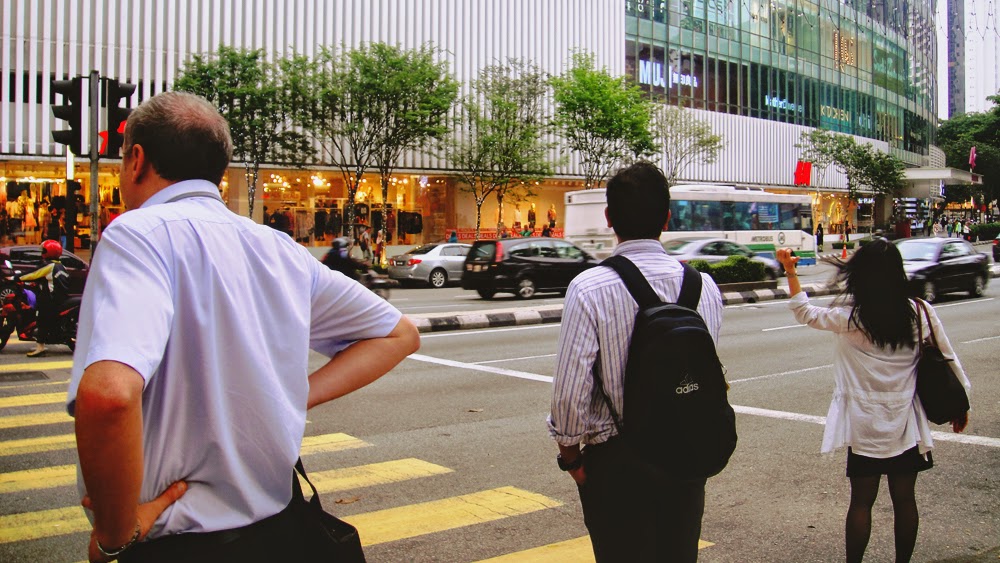 You'd be forgiven for thinking Malaysia is very much like the Philippines, more so if you're arriving from Singapore, via coach, passing through one of two border crossings.

Your journey begins at the coach terminal in Kallang, a sleepy district, if you could call it that. It's not far from the city center, but the old architecture and the quieter sidewalks suggest a wholly different world, especially if you've spent the past few days in the company of a constant stream of convenience stores and signs to the MRT. You sit at the steps, waiting for your bus to arrive, hoping you find a spot that's not damp from the occasional rains.

Half an hour later, you do board the bus, and as it makes its way to the Tuas crossing, you're treated to one last look at the city-state's new landmarks and the accompanying modernness that it brings, the whole "this is how a city should be" feeling that you get when you realize that the place just works. Next thing you know, you're in a highway, and thirty minutes later - rush hour means nothing - you bus is part of a long queue to the checkpoint. A queue. You don't expect queues in Singapore.

It takes you an hour for the bus to leave the checkpoint, because some of the passengers take longer than usual to be cleared through, for some reason. You finally cross the bridge, and suddenly everything is different: the street signs are different, the road markings are different, and the immigration process - you're now asked to bring all of your luggage for customs clearance - is different.

Only then does your 300-kilometer journey really begin. The bus meanders through Malaysia's most important highway, and all you see are trees and billboards. Now, here's where things differ. You remember long road trips to the north, to Ilocos, for instance, and you remember being bombarded by all these billboards, one bigger than the next, peddling whatever it is they felt needed to be peddled. Here, all the billboards are of a uniform size. They're small. Well, they're big enough, but they're not as big as the ones you see in, say, Pampanga, on that long viaduct. That aside, the billboards feel oddly comforting, as they sell the same things: mineral water, an apparel line, agricultural supplies.

And, to boot, you see a bunch of gas stations, and one out of three is Petron.

But you know you're still in Malaysia. You're still in a country that's entirely different from the one you just left, or the one you're going to return to. The Malay and Filipino languages may share a few words - again, bawang, onion for them, garlic for us - but the newspapers are different, and the currency is different, and the drinks in the counter at the rest stop in Yong Peng are different. (But slightly familiar, because they're the same drinks you pondered buying at the vendo machine at Tuas.) There's a bit of confusion when you buy nasi lemak, your belated lunch. "Do you want chicken with that?" the lady at the counter asks, and you just say yes. You try to eat everything in twenty minutes, but the bus leaves late again, because the passengers who got stuck in immigration took a long time to eat lunch.

The journey eventually continues, and you see the same old sights, and then some. "Sime Darby Plantation", one of the signs says, and you remember that this is one of the country's biggest companies. You'd see that name many times in the next few hours. Plantation. Plantation. Properties. You're halfway through your journey - you just know, even if you really don't - and you start to see a complex of condominium buildings rising. Just like Manila, then.

And this goes on and on, with increasing frequency, as the bus driver chats on the phone while driving, as the sun sets, as you quietly force yourself to rearrange your schedule.

"Rush hour is coming and we're being told we might arrive at nine," you tell the person you're supposed to meet at this very hour. "Move to another date? Your call."

"Whoa, have fun with rush hour!" she replies. "And another date sounds better right now."

They did say Kuala Lumpur's rush hour is quite terrible, and you brush it off, because Manila's rush hour is terrible. And so are its non-rush hours. And the only traffic jam you do encounter lasts only fifteen minutes or so, on your final approach to the bus terminal. It's now half past six in the evening. You're three hours behind schedule.

What's there to see in Kuala Lumpur? you ask, and you're quite hard pressed to find answers. Sure, there are answers. The Petronas Towers. Chinatown. Menara KL. At least these are things you don't see in Manila, but let's admit it, they're not particularly exciting, even to a guy like me who likes city skylines. The only answer you usually get is "shopping", and even if your hotel is in the heart of Bukit Bintang - the "tourist district", as everyone puts it - there really isn't much choice, or at least not as much choice as Manila. Gone are the days when you go to a foreign country and you see completely foreign shops. Everything is a variation on the same old things, whether it be a foreign luxury brand, a pretending-to-be-upscale upstart, or a homespun local favorite.

You do make the rounds in the usual spots, and while they're astounding in different ways, they all bleed together into the same thing. The only thing you vaguely enjoy, perhaps, is your trip to the Batu Caves, a series of Hindu temples built inside a big cave, situated up a mountain north of the capital. You take a train from Kuala Lumpur's (very) busy central station, ride it for half an hour or so, and watch the city disappear. You know you're far enough when you can no longer see the Petronas Towers when you look up, and seven kilometers is far enough. That, and the fact that you're seeing doves and monkeys and colorful statues depicting Hindu deities, and you climb 272 steep, freshly-painted steps to what turns out is just the first temple.

There's a creeping sense of homogeneity in Malaysia, or at least in Kuala Lumpur, and you know it's not supposed to be entirely that way. You have a Chinese enclave. You have a sprawling tourist destination built for Hindu worship, and still used for Hindu worship. But they're in their corners. History has made Kuala Lumpur - indeed, Malaysia - the samey place that you perceive it to be. Or maybe it's just your lack of familiarity. You certainly don't get that feeling in Manila, more so in General Santos.

The one observation you make in Kuala Lumpur, though, is hidden in the little details. Malaysia is stubborn and proud. You see it in the Malaysian flags that dot the major streets of the capital city. You see it in the eternal presence of the Petronas Towers, built to put Malaysia on the map, as a country that everyone should reckon with. (There's also talk of building a new building much taller than those two, for the same reasons.) You see it in the stories you hear from your friends working in the city, of positive discrimination laws that put non-Malays at a disadvantage solely because they're not Malay. This is why Singapore is Singapore right now: a predominantly Chinese island - although not initially - forced into an unhappy partnership with a predominantly Malay country, ending in a sudden divorce. Talak, talak, talak, as Singapore's first prime minister, Lee Kwan Yew, put it in his book, The Singapore Story, outlining the long road to independence; he portrayed his country as the aggrieved wife slapped with a random divorce. Or at least that's what you understand from all those late nights spent reading in the dark.

Two days later, you finally meet that friend you were talking to at the bus. Well, texting, in long text messages, to make the most of the money you'll inevitably pay for texting a foreign number. She's not from Kuala Lumpur; she's here because of her studies. She comes from Sarawak, on the other side of Malaysia - a sea away, in fact. Sarawak is one of those places that also found itself wedded with what was then called Malaya, back in 1963. She looks Chinese, but doesn't speak any of the languages. (You later learn that she has more in common with your compatriots in General Santos.) You ask her what the Malaysian term for garlic is, and she texts someone for the answer. "The ultimate question," her friend replies, as you grab some sushi with your chopsticks, to the best of your so-called abilities.

You wonder, why the homogeneity? and then you realize that you're really just in Kuala Lumpur, a city situated on the side of Malaysia that's dominantly Malay. It is in the name, after all. You do see people of different ethnicities - and there are a lot, from Chinese and Indians, to the new breed of foreign workers - and then you read up on the country's bumiputera laws, and you think of two things. One, it's undeniably helped make Malaysia what it is now, giving the locals control over their land, as opposed to the then dominate Chinese and Indians who came in for business. Two, it's, more or less, shunned everybody else. But it's become a fact of life, and people learn to live with it.

And then you realize that there is much more to Malaysia than what you see in Kuala Lumpur.

"Maybe I should go to Kota Kinabalu next time," you tell your friend as you ponder getting another piece of sushi.

And you proceed to talk of struggles with people who just can't seem to understand how desktop publishing software works.
And your responses...