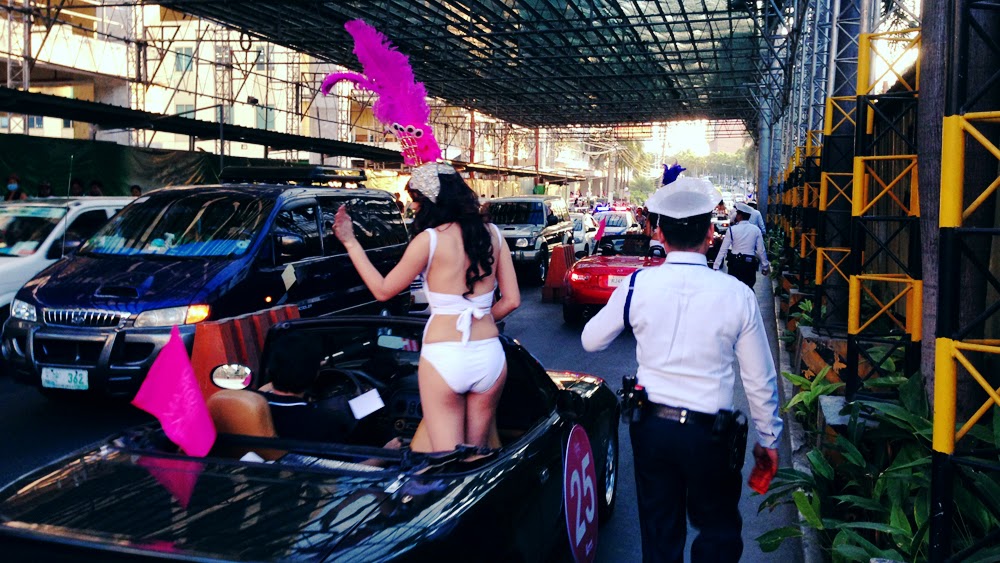 Then again, we figured we had lots of time to kill. We're heading back to the parking lot, after all. It'll just be a longer walk than usual, right? And at least we're still with each other, as cheesy as that sounds.

Then again, we both agreed we'd leave at five in the afternoon, and I'd drop her off at her place before I drove home. Cubao has terrible traffic, and I live quite far from it. And she still had to buy something at the bookstore. And we had to go to the toilets first. (Separately, of course.) And I'm, sadly, a guy who wants to stick to the mutually-agreed timeline, because, really, is there a worse way to spend Saturday night than being stuck in traffic, with only terrible songs on the radio for company?

And so we walked. It's Saturday. There are lots of people. The Araneta Coliseum had some auditions for some reality show, so there were more people than usual. The sidewalks around it were littered with people. Mostly men. Construction workers. Security guards. A cavalcade of security guards, blocking the road. Wait. Why can't we walk? Wait. This is something else.

I only really saw it on the billboards, and then forgot about it, because I really didn't think we'd cross paths with it. This year's Binibining Pilipinas contestants - the winners of which will represent the country in the world's biggest beauty pageants - are taking part in a motorcade around Araneta Center, alongside last year's winners. And there we were, only aware of the really loud drums and all the security guards. And then, a white van, with a sponsor's name plastered all over. And then, a convertible, all waxed up, slowly being driven by some guy. Beside that guy is contestant number one, a big headdress on her head, and a white one-piece swimsuit elsewhere.

This is awkward, I thought.

Rainy and I went to Nuvali on Valentine's Day. While walking around aimlessly, I noticed a guy look at my girlfriend as he passed by us. I would say "checked my girlfriend out" - and I should, given that this is an opportunity to show how macho I supposedly am - but frankly, I wasn't really sure of his line of sight. But, yes, he was looking at my girlfriend, and it all happened in a split second or so for me to react to it.

"Anong naramdaman mo?" she would ask me later. "Nagalit ka?"

I shouldn't mention that, given that this is an opportunity to show how macho I supposedly am.

So what am I supposed to do now? I am with my girlfriend, and passing in front of me are a bunch of women in one-piece swimsuits, wearing heavy make-up, waving at us. And around me - because nobody can really walk away at this point - are construction workers from a nearby site, and shoppers lost for a reaction, and all those security guards. This is really getting awkward. I mean, you know us men, right? All we want is to check women out, right? We are such perverts, right? We may be in a happy relationship, but one woman is not enough, right?

Well, there's also the supposed target demographic of all these beauty pageants. I saw two gay call center agents rush out of their office. One walked to one of the cars and tried to keep up, while the other pulled out a phone and took a photo. A photo of guy number one and contestant number 15.

But still, there were more construction workers, and they were enjoying the view.

There was this guy driving a car, and he stopped his car in the middle of the road, and he opened the window, and he stared at the contestants. More like, he was sizing them up, one by one. And he quickly - but not quickly enough, because Rainy caught it - licked his lips.

Is that what I really am?

The whole thing passed us by after a good twenty minutes or so, and we were finally able to walk to Ali Mall. Turns out Rainy made closer observations than me.

"Number 27 has stretch marks!" she said.

I'll say my eyesight is terrible. While I was pondering the awkwardness of having ladies paraded out for an unsuspecting public to nonetheless ogle, my girlfriend, well, was looking at their abdomen.

"'Di. Kasi... it somehow comforts me, that they're human beings, too."

Right. Here's my girlfriend, the most beautiful woman I ever know. I always tell her she's pretty, but there are times when she won't have any of it, and it will take her seeing these supposed vanguards of beauty up close to realize, if only for a moment, that these vanguards are not perfect either.

But then my mind shifts to the fact that one of the ladies that passed us by could very well be representing us in the Miss Universe pageant. Too bad I don't know who's who. If she finds herself in the top five, I would have had something to brag about.
And your responses...