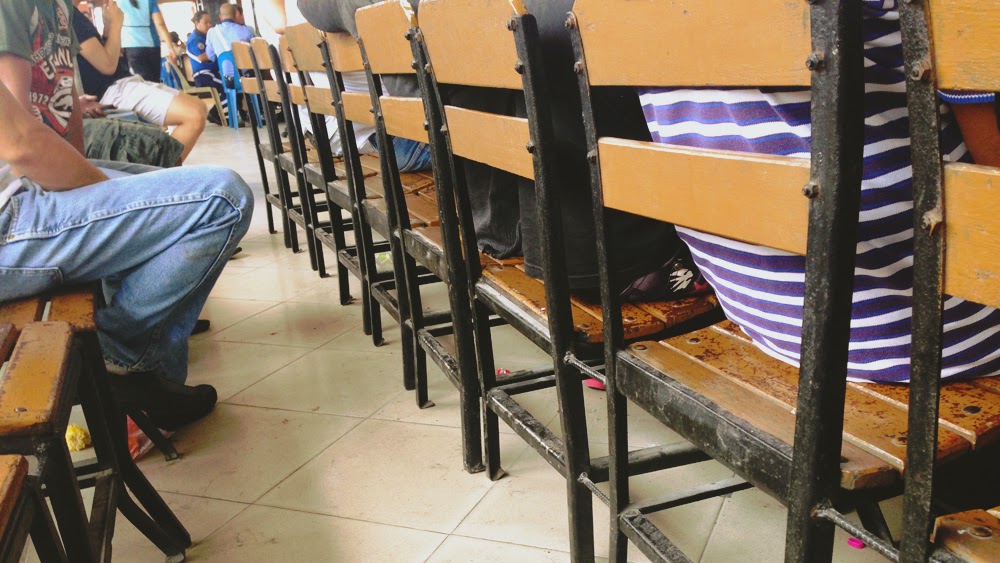 The engine just died as I was changing lanes, as if I turned the key midstream, but the radio was still on, and the air condition was still on. It couldn't be the battery, I thought. I tried to start it. The car was trying, but it wouldn't seem to connect. And then the battery light flashes on, as well as the oil. We just had this car repaired yesterday! I thought. What the hell is going on?

I was driving our oldest car. A Ford, thirteen years old, but it still works fine, save for the sun shield that wouldn't lock, and doorknobs (that's not the right term, I know) that would break instead of opening the door. But for the past few weeks it's been getting us into a fair bit of trouble. I brought it to the carwash one Sunday and, quickly, the engine overheated. Smoke came out of the hood just as I was parking the car to be washed. It's a sucky experience, driving a car into the carwash, and pushing it out once the deed is done. We'd find out it's thirsting for coolant, for some reason.

My brother used the car a couple of days later. We assumed everything is well - we found out a hose was leaking and the fan was not feeling well - but suddenly the car overheated again. And he was in the middle of the road. An emergency stint at the car repair shop revealed that the replacement part wasn't working in the first place, so once again, it spent the night at the hands of mechanics who obviously know more about cars than I do. They gave it a clean bill of health, and it was back home... only for my brother to take it to our second home, swapping it with the Honda, because he doesn't want to drive the Ford anymore. Why he has to drive a car just to enroll for his final term in college, I will never understand.

My dad was flying to Bohol - just a day trip - but a mix-up meant he was flying out through NAIA 3 and returning through NAIA 4. He decided not to bring a car and park it at the airport, and instead asked me to drop him off and pick him up. He would've asked me to drive the Camry - the company car; a big, intimidating thing - but we decided to use the Ford instead. I dropped him off at the airport, then drove to the office, before finding myself in the middle of EDSA, with a broken down car.

Thankfully a bunch of traffic enforcers from the MMDA were nearby. My breakdown was right near their office, sort of. They pushed my car to an emergency bay, and watched as I tried to figure out what exactly was wrong. I didn't. Maybe it's a loose battery connection? I only went this far because I was calling my dad on the phone. Not exactly the best look for me. I took a wrench from the trunk, opened the hood, and began poking at the battery, despite the fact that it looked fine to me.

There were five traffic enforcers watching me make a fool of myself.

What the hell? I thought, as the MMDA folk guided me back out to traffic. I mean, I could do it myself, but let's be honest: EDSA is EDSA. As I drove off, talking to one of my colleagues on the speakerphone, saying everything will be fine, I hoped that the car would at least let me go to the office in peace. It did, thankfully. Until the very last traffic light, at the intersection of Sheridan and Shaw, one block away from my office building.

My engine died again just before it went green.

The worst thing that could happen did: the motorists behind you start honking as you turn on your hazard lights and figure out why the hell what's happening is happening.

This can't be an overheat, I told myself. The gauge was stuck where it was, and I'm pretty sure it's working nicely. I opened the hood, now very much puzzled. What the hell is wrong with you? I thought. Closed the hood, went back in, tried to start it again. It's trying, but it ends with a whimper. The radio, the air conditioning, it's still working fine.

Once again I was swarmed by traffic enforcers, but this time from the Pasig TPMO. (This is tricky, because technically I'm right by the border dividing Pasig and Mandaluyong. Also, technically, I am in Mandaluyong.) One of them went to the passenger side window, which I promptly rolled down.

He said that last thing with a subtle glee and enthusiasm.

I am not the best driver. My driving has, several times, led me in contact with the authorities. I hit a car once. I was hit by a car another time. Both were clearly accidents, and I was clearly not in control of my circumstances this time. How would I know my car would be breaking down at this particular moment in this particular place? And why am I getting a traffic violation for this?

My colleagues had, by then, rushed out of the office to both assist me and try to make the traffic enforcer change his mind. I was afraid, yes, but at the same time, there really is nothing I could do, yes? He argued I blocked an intersection for two green lights, never mind that I clearly had a car that wouldn't start. I couldn't argue my way out of it, partly because I've never been in such a situation before, and partly because I might make things worse.

"So anong proseso?" I asked the TPMO guy, trying my best to not be angry.

As he took my driving license and swapped it with a traffic ticket, I was able to start the car.

We'd later figure out that it's likely some obscure-sounding parts that tend to break down, over time, with age. I figure the previous weeks had taken a toll on those parts, and all that culminated with my first traffic "violation", one that I did not intend to do. But, well, here I am, without a driver's license, and seated in some bench, waiting for my name to be called out.

The Pasig TPMO office isn't located at the posh-looking city hall, but a few blocks north, right near the fire station. The first floor is filled with motorbikes, traffic enforcers having their snacks, and stored signage with the former mayor's name bigger than its actual message. There were no signs leading you to the right place. I had to ask a couple of people to be sure.

The building was under construction in places. You'd hear the whir of power tools and hammers and you made your way to this partly makeshift office with the words "Redemption Center (Tubusan)" on top. It's an outdoor hallway, and it's filled with people who also came to pay their fines and redeem their licenses. I found myself and seat, regretting that I came to work wearing a business-y outfit. It's too hot, and there are no fans.

The process is relatively straightforward. You give your ticket to the first window, and you wait for your name to be called out. You'll be handed a computerized assessment of how much you'll pay. You pay that amount - it is, indeed, five hundred bucks - through another window. When you get your receipt, you claim your license in yet another window, provided your license is already there.

I took a seat at half past three. My outfit meant I stuck out like a sore thumb. I was surrounded by people in shirts, both tight and loose. The former were from teenagers who clearly tried their luck and didn't quite get away with it. The latter, I assume, were jeepney drivers. We all shared one thing: the stench of our sweat.

Above the windows was a table outlining the redemption process, plus who's in charge and how long it should take. I've seen the same thing at the LTO office in Alabang, when I was renewing my driver's license. Those things never get followed, of course. You know our government. They make standards, but don't follow it anyway

My colleague from earlier, who I tagged along with as he filed some documents at city hall, called me on the phone.

There were more signs around. One outlined the traffic violations, and the corresponding fines. Some were obvious - "not giving way at intersections" is where I probably fell - while others were confusing. Passing vehicles. We all pass vehicles, don't we? Isn't that what usually happens when you drive? Keeping as far as practicable. What does that mean? Am I just being a noob, or does that sound safer than it should be?

There was, apparently, a fine for driving a vehicle while wearing a sando or slippers, but someone scratched that out.

At the very top of the list was a very vague "any violation of general driving rule," with a corresponding P500 fine. If you're unlucky, anyone can throw that at you, and you have to go through all this.

The assessment of charges, that table said, should take two minutes. I waited for forty-five. I waited for forty-five minutes, seated in a bench improvised from what I think are school chairs, in a crowded corridor without a fan nor proper circulation, and with the occasional smell of construction chemicals - that cold, pungent smell you can recognize from newly constructed rooms. It wasn't everywhere, but when it was, it was. It gushed out of a door. It was the only breeze I would get. It's as if I was being punished for my car breaking down where it did, when it did.

But who am I to argue? All of us waiting at that particular time - we are crooks in the eyes of the law, or at least a particular segment of the law that is vague enough to theoretically catch anyone, like it did a man whose vehicle broke down in the wrong place at the wrong time.
And your responses...